"I do not deem your departure advisable at this time for your presence in Afghanistan is a source of blessing and pride for this land's inhabitants," wrote King Amanullah Khan (r. 1919-29) to Naqib Sayed Hassan Gailani, Pir of the Qadiriyyah Sufi order of Afghanistan on March 21, 1929.

Faced with an uprising that eventually ended his reign, the Afghan monarch beseeched the Sufi Pir to abandon his travel plans, and instead, assist the state in subduing the rebellion. 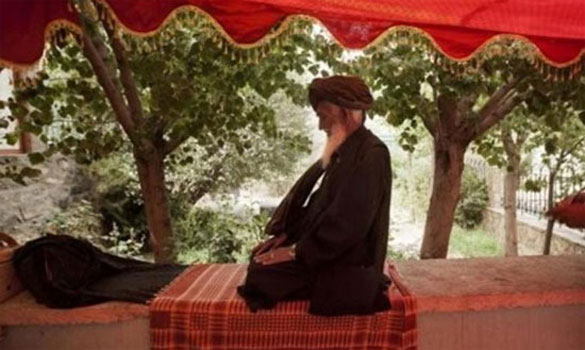 A nation with hundreds of years of Sufi tradition engraved in its popular culture could easily return to its spiritual origins, writes Malikyar [AP]

The uprising, led by Habibullah Kalakani who, like a number of conservative Afghans, was offended by King Amanullah's rapid reforms, is said to have been instigated by the British. Interestingly, the head of the Naqshbandiyya Sufi order of Afghanistan, Hazrat Nur al-Mashayekh Mojaddidi, was actively helping the rebellion against the king.

Historically, Sufism has always been intertwined with Afghan politics. The story of a Sufi dervish placing a wreath of wheat on the head of Ahmad Shah Durrani, the founder of modern Afghanistan, at a Sufi shrine in Kandahar in 1747 is told to confirm the Durrani king's legitimacy. Zahir Shah, the last monarch of Afghanistan (r. 1933-73), was proclaimed king after Hazrat Nur al-Mashayekh placed the ceremonial turban on his head.

Prominent mystics had great roles in two Anglo-Afghan Wars and in a number of rebellions in the 19th and early 20th centuries against the state. Many peace deals were brokered by Sufi leaders as they enjoyed respect among both sides of conflicts throughout Afghanistan's tumultuous history.

The importance of the role of mystic leaders fluctuated. But even at their lowest moments of political significance, their perceived power, if not de facto importance, has preserved Sufi leaders' place in Afghan politics.

To understand this influence, one must understand that like most of South and Central Asia, in Afghanistan too, Islam took root primarily through the mystical dimension of the religion.

The Islam of Afghanistan, therefore, has traditionally been Sufi Islam, particularly the understanding of the religion that is offered by the Qadiriyyah and Naqshbandiyya Sufi orders.

Unlike many other Islamic countries, Sufi orders in Afghanistan are not exclusive elite mystical clubs. Rather, they claim adherents among all segments of society. While conventional Sufism, consisting of Khanqahs, initiation rites and regular Dhikr sessions do exist, the majority of Afghans are considered maraboutic Sufis or devotees of a certain pir and his family by inheritance. It is mostly this kind of Sufism that continues to give a unique privilege to the descendents of the Gailani and Mujaddidi Pirs.

And this was precisely why after the communist coup d'etat of 1978, which was followed by the Soviet military invasion, the majority of Afghans turned toPir Sayed Ahmad Gailani and Hazrat Sibghatullah Mujaddidi, the two main Sufi sources, to lead their resistance.

Other Mujahideen leaders that formed resistance groups in neighbouring Pakistan and Iran were mostly heads or members of radical Islamist parties that had emerged from the late 1950s onwards in Afghanistan.

As the primary conduit and manager of the US military assistance to the Afghan Mujahideen, Pakistan's Inter Service Intelligence agency (ISI) chose to sideline the Sufi-led Mujahideen groups and bolster the radical organisations with which it had established relationships long before the Soviet invasion.

The uneven distribution of arms, cash and political support throughout the 1980s to some extent diminished the political magnitude of Sufi leaders, though their spiritual positions remained, for the most part, intact.

In April 1992, after the fall of the last remnants of the communist regime and the take-over of Kabul by the Mujahideen, Hazrat Sibghatullah Mujaddidi, head of the Naqshbandiyya Sufi order, became the first interim president of the Islamic Republic of Afghanistan.

While Mujaddidi remained somewhat active during the ensuing civil war (1992-96), Gailani, the head of Qadiriyyah order, bowed out of the internecine conflict and asked his followers to do the same.

Both Sufi leaders became the harshest critics of the Taliban movement as the religious students swept the country off of former Mujahideen commanders and took Kabul in 1996. Paradoxically, a number of the former commanders and followers of both mystic leaders eventually joined the Taliban.

At the Bonn Conference of December 2001, where an interim Afghan government was formed to replace the Taliban, Gailani and Mujaddidi were represented. But, like the Pakistanis, the Americans too, downplayed their significance in the Afghan society.

Despite the recent universal rise to prominence of radical Islam and against all the money and sophisticated propaganda machinery that they utilise to exploit the weaknesses of Muslim states and disenchantment of Muslim masses, a majority of Afghans continue to see Islam through traditional Sufi lenses.

The Americans and the international community have spent billions of dollars in Afghanistan in the past 12 years to fight extremism. But, they never understood that by investing - politically and financially - in promoting the mystical dimension of Islam, Afghan society would have had a more effective means to sideline extremism. A nation with hundreds of years of Sufi tradition engraved in its popular - as well as high - culture could easily return to its spiritual origins and it would have cost Washington and NATO capitals far less in treasure and lives.

Karzai also lost the support of his longtime ally, Hazrat Sibghatullah Mujaddidi, when the former refused to sign the Bilateral Security Agreement (BSA) with the US after a Loya Jirga (Grand Assembly) unanimously voted in favour of concluding the agreement.

Recently, in a shrewd political chess move, the Afghan president has brought Mujaddidi’s cousin, Mohammad Amin Jan, to Kabul (he was residing in Pakistan) and has given him a seat on the High Peace Council. While with this move Karzai showed that he can easily replace a rebellious Sufi leader with another, he also gave away his dependence on the support of Sufi leaders and his understanding of their continued significance in Afghan society.

Given the three-decade-long systematic reduction of the role of Sufi leaders, and in an election where vision, ideology and principles come secondary to money and the buying and selling of votes, the names Gailani and Mujaddidi may not fetch great numbers of ballots, but they continue to carry weight in an indefinable way.

Perhaps those names add a certain dignity, respectability and trust that protracted conflict and foreign interference has erased from Afghan politics. Perhaps, unlike westerners, those two Afghan politicians have realised that Sufism is the age-old anchor on which society relies when all else becomes dubious and complicated.

Helena Malikyar is an Afghan political analyst and historian.

The views expressed in this article are the author's own and do not necessarily reflect Al Jazeera's editorial policy.