As the polls closed in Afghanistan's presidential elections on April 5, optimism reigned supreme. The war-ravaged nation had regained its sense of determination and self-confidence. For "one brief shining moment", it seemed in the three-decade-long history of invasions, internecine wars and despair, "there was Camelot".

The announcement of a partial vote count last week, which comprised 10 percent of total ballots, woke the people up from their state of reverie. The results placed Abdullah Abdullah at the top, followed by Ashraf Ghani. At a far distance, Zalmai Rassoul - long touted as "frontrunner" by mainstream Western media - was in third place. The ranking has remained the same as the results of 50 percent of ballots were released on April 20. 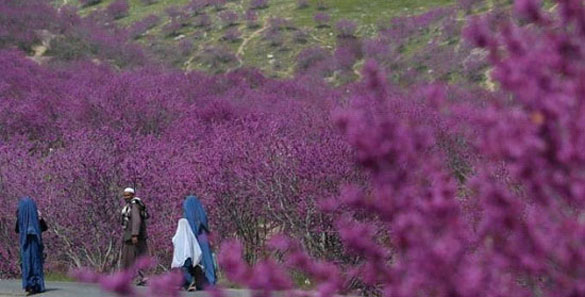 This seemingly simple picture belies a complex set of factors, games and consequences. The Afghan populace shows signs of readiness to move beyond predatory politics, but the political elite continue to lead them on the basis of Byzantine games.

Sadly, several significant messages that were conveyed by the large turnout and preliminary results are overlooked by Afghan leaders: First, voters said "no" to regress, be it Taliban-style or based on platforms offered by conservative candidates within the system; second, they expressed their dissatisfaction with Hamid Karzai's two-term presidency; and third, they demonstrated awareness of the democratic process and used it to voice their opinion, moving away from the culture of violence.

Preliminary tallying has confirmed a slight move away from ethnic politics. Ghani, an ethnic Pashtun, received a percentage of votes from the northern mostly non-Pashtun provinces. Abdullah attracted voters from the south and the east, the so-called Pashtun belt, even though he is considered a leader of the Tajiks.

The general assumption was that he whom Karzai chose would be the winner. The president's skilful manoeuvrings in internal Afghan politics during the past 10 years had built a perception that he would always win. By the time the campaign season officially kicked off, Karzai's unannounced choice appeared to be Rassoul, a former foreign minister and the president's confidant since 2001.

According to one conspiracy theory, the Afghan president was plotting a Putin-Medvedev style arrangement by amending the Afghan constitution after Rassoul's victory and replacing the presidential form of government to a parliamentary one, whereby Karzai would regain control by becoming prime minister, while Rassoul would serve as the figurehead president. His Plan B, the theory went, was that in case his candidate did not achieve a clear win, Karzai would take the lead in forming a coalition of all top candidates, ensuring continued relevance for himself in the future government.

The announcement of preliminary results triggered a series of meetings and negotiations between the top three candidates and with the outgoing president. Abdullah is said to have had several meetings with Karzai and Rassoul. A couple of such parlays were also purported to have taken place between Ghani, Karzai and Rassoul. Team members from all sides are constantly engaged in talks.

Rumours abound about all sorts of deals in the making. One scenario pictures Abdullah and Rassoul teaming up. What has prevented the conclusion of such a deal so far is, according to some sources, that Abdullah believes he will be the undisputed winner with well over 50 percent of the votes, and therefore does not deem Karzai or Rassoul to be in a position to set conditions for a deal.

The latest buzz has it that to strengthen his bargaining position vis-a-vis Abdullah, Karzai has now dropped Rassoul and has made overtures to the Ghani camp. A Karzai-Ghani alliance would place the president - and possibly Ghani - in a favourable negotiating position with Abdullah.

Why, one might wonder, if there is a good chance that Abdullah will garner the highest votes would he try to seek a deal with Karzai? Why is Ghani's team insisting that their candidate will end up as the winner? Why are Rassoul's proponents still optimistic about his presidency, even though the preliminary results put him at slightly above 10 percent?

More curiously, why does an outgoing president continue to be a major player in the negotiations?

The Ghani camp insists that if the Independent Elections Commission (IEC) and the Elections Complaints Commission (ECC) conduct a transparent and honest tallying, Abdullah's total votes (after fraudulent ballots are deducted) will drop to below 50 percent, necessitating a runoff between him and Ghani. In this scenario, they are predicting to receive additional Pashtun votes that during the first round went to Abdullah and Rassoul, resulting in a Ghani win in the second round.

The international community and particularly Washington do not favour a runoff, which will be costly and a security headache. The delay in swearing in the new president will also present governance problems, not to mention further suspension of the Bilateral Security Agreement (BSA), which Karzai has refused to sign with the US. It is therefore more convenient to avoid a runoff, support a coalition of major stakeholders and call it a success in democratising Afghanistan.

Seeking deals and coalitions are deemed necessary because there is a perceived threat that the Pashtuns, as the largest ethnic group, may not accept Abdullah as the country's president. On the other side too, some members of Abdullah's team are throwing threatening statements to the effect that anything short of their candidate's win, will turn Kabul into a bloodbath.

"Afghanistan is not yet ready for a straight-forward, winner-takes-all, democratic process," argue many politicians these days. "Leaving out any major player will drag the country back to violence."

If stability can only be assured by forming a coalition of all three candidates, who will form the political opposition that is necessary for a healthy democracy?

If a deal is struck preventing a runoff, we shall never know if the announcement of one candidate as winner of the elections would have been acceptable by the nation. Both electoral bodies have already lost people's trust due to decisions and activities that were perceived to have been influenced by power centres, be it the presidential palace or some of the candidates. Moreover, the threat of violence is being used effectively to push for a coalition or as yet another "corporation with the same old shareholders", as the critics call it.

If, on the other hand, the powers that be allow completion of the election process and one winner emerges, the best scenario would be for the next president to genuinely reach out to competent people in his rivals' teams and recruit them. This will raise his administration's competence and will portray him as a national leader capable of rising above petty politics. A conceptual framework under the title of "national unity government" already exists. It was an initiative launched by Ahmad Wali Massoud and prepared by a group of intellectuals in consultation with political leaders, including the presidential candidates. The scheme, which may need some adjustments and refining, calls for the losing candidates to present a number of well-reputed technocrats from their teams to the winning candidate. The latter, in turn, is to show flexibility and wisdom and form an inclusive and competent government. The idea is to have a widely participatory and capable government, while breaking away from the tried and failed coalitions of past years.

Afghans' formidable show of support for the democratic process on April 5 has since been hijacked by their leaders and the international community. The US and its partners are, once again, supporting expediency at the expense of principles. The brief shining Camelot moment of the people of Afghanistan has ended, but setting the country back on the right track can still be achieved.

Helena Malikyar is an Afghan political analyst and historian.

The views expressed in this article are the author's own and do not necessarily reflect Al Jazeera's editorial policy.