Most people in Bangladesh want a political consensus so that a credible election can be held. Picture shows commuters trying to board an overcrowded train on the fourth day of the six-day blockade called by the opposition in Dhaka.

The resurgence of new radicals such as the madrasa-based Hefazat-e-Islam, patronised by both the Jamaat and the BNP, is viewed by India as inimical to the interests of a stable, democratic Bangladesh

Bangladesh is set to go to the polls on January 5, 2014 to elect its 10th Parliament amid a protracted political crisis. The Opposition combine has initiated a new wave of violent agitation to undo what it calls a “unilateral election.” However, it is unlikely that the Election Commission will cancel the polls it has announced to meet the nation’s constitutional obligations, unless the political players manage a negotiated settlement of the crisis. 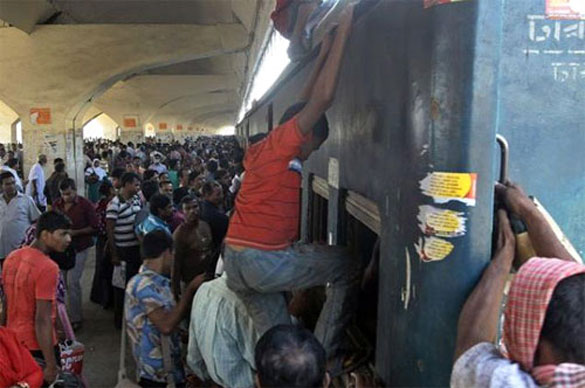 Interestingly, the political crisis of the small South Asian nation has drawn global attention of varying dimensions. Some of Bangladesh’s “foreign friends” are subscribing to what the ruling “pro-liberation” secular political parties stand for, and others are possibly lending weight to the anti-government protagonists who largely pursue political Islam, including militancy.

The United States has had frosty relations with the Awami League since the time it supported Pakistan (then West Pakistan) during Bangladesh’s Liberation War in 1971. That the Awami League has a somewhat socialist orientation and maintains closer ties with India could also be other reasons for Washington’s antipathy.

The U.S. is for a “constructive dialogue” between the major political parties and against any election excluding the main opposition party. Even though India is a strategic ally of the U.S., the two countries are not in common understanding of the Bangladesh situation.

The reasons may be more than one. Bangladesh is not only India’s next door neighbour; India played a historic role when the people of former East Pakistan fought their war of independence against the Pakistani army. India, as media reports and analyses suggest, has maintained that the polls should be free, fair and credible, and that it is for the people of Bangladesh to decide who will form the next government.

In recent years, Bangladesh has met some vital security concerns of India. Moves were made to restore regional connectivity which New Delhi wanted, including boosting of trade and commerce. All these, however, irked the Jamaat-e-Islami and its ally, the BNP. The BNP’s strong alliance with the Jamaat since 2001 and the Islamist militancy that developed when they shared power are cause for concern.

The resurgence of new radicals like the madrasa-based Hefazat-e-Islam, patronised by both the Jamaat and the BNP are also seen as being inimical to the interests of a stable, democratic Bangladesh. The U.S., which, ironically, considers the Jamaat as a “moderate Islamic party,” appears to think that the threat perception of Bangladesh’s liberals, perhaps shared by India, is overblown.

China was the firm ally of Pakistan in 1971, and it vetoed twice Bangladesh’s entry in the United Nations. However, Beijing’s relations with the Awami League developed in later years. For China, which maintains a significant military relationship with Bangladesh, a stable Bangladesh is important. Going beyond its tradition, it has made a number of public statements about the current political situation, calling for dialogue between the major parties.

In 1971, the former Soviet Union supported Bangladesh’s independence, as part of its alliance with India. During the tenure of the Sheikh Hasina government, relations were revived. However, Moscow has made no statement on the current political stalemate.

The European Union’s stated position is that it would like to see a participatory and credible election with a level-playing field. There are some who feel that as, according to the Bangladesh Constitution, elections must take place by January 24, 2014, it is irrelevant which party boycotts it. But an election without the participation of a major political party might lack credibility.

Many pro-West civil society leaders in Bangladesh think India’s understanding of the Bangladesh situation may “backfire.” On the contrary, secular thinkers overwhelmingly see the U.S’s understanding of the situation as a “sheer misjudgment.” They argue that the implementation of Washington’s stand may be “dangerous” for Bangladesh’s democratic future, as the “defeated forces” of 1971 may get a further boost.

Many diplomatic experts say that India should not pursue a “one-friend policy” in Bangladesh. But it must neither pursue, they argue, a policy that harms secular “pro-liberation” forces and encourages religious fundamentalists and communalism.

Democracy, development and counter-terrorism are common among Washington and New Delhi's concerns as stated. But India, perhaps, has an additional responsibility — of ensuring that it does not support the rebirth of militant and political Islam, against which Bangladesh was born 42 years ago.

As a political consensus is still remote and Bangladesh is firmly on its way to election, a vital question is: will the opposition succeed in undoing the electoral process? A significant population of Bangladesh will answer in the negative, even while admitting that the opposition might succeed in causing destabilisation resulting in death and destruction. The BNP’s weak organisational strength was evident in the recent anti-government campaign, when it was almost dependent on the hardcore Jamaat “cadres” whose prime concern is to undo the war crimes trial and get its convicted leaders freed. If this dependence continues, even many BNP leaders fear, the ultimate leadership of the opposition camp might be taken over by the Jamaat. There is a near-consensus that the violent means demonstrated in the recent street agitations have largely eroded the BNP’s popularity.

A majority of people in Bangladesh wants a political consensus, so that a credible election can be held. However, there is a third option that always comes to mind when the country is in a political crisis: the intervention of the army. When the BNP-Jamaat coalition was in power (2001-06) and desperately wanted to be re-installed in power by holding a unilateral election in 2007, the military intervened covertly. Initially popular, the military-backed regime stayed in power for two years. Despite a series of controversial actions, the regime organised fair and credible elections in 2008.

The scenario has changed today and there is not much likelihood of a repetition of events.