A Dream of Spring

Lately, I have been wondering whether it is possible for entire mobs to develop compulsive habits of their own, habits that they resort to at every turn in life, good or bad. What makes me ponder this? Let me explain. 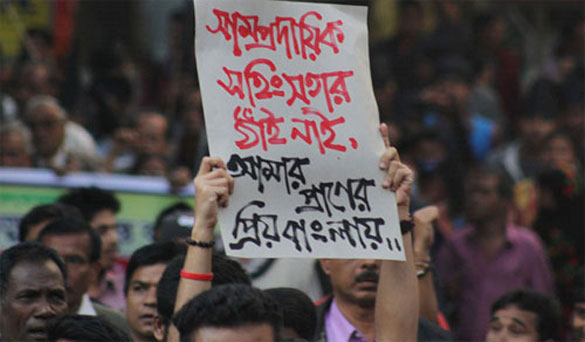 I was just finishing school in 2001, when the parliamentary elections were being held. As we all know, the coalition headed by the BNP won that election and went on to form the government. Victors need to celebrate, and the new rulers celebrated with what I can only surmise is their favourite activity in this world – the torture and massacre of the non-Muslim citizens of Bangladesh.

Having to qualify the phrase citizens of Bangladesh with the phrase non-Muslim greatly pains me. I am much younger and much less educated than many other people who are always prominent in media. However, from whatever I have read about the history of this country, the religion of a citizen was not supposed to matter. That was supposed to be in the past, or in some other land. We were supposed to build a nation where religion did not matter.

The last few months of 2001, and the beginning of 2002, were full of news reports from all over the country. Everywhere, Hindu families were living in fear of arson, torture and murder. The most painful part, for me, was how it often seemed that they have accepted it as their destiny. It is as though that if they live in this country, they must put up some people using them to vent their issues.

Let us take an aside here. It is heartbreaking for me every time I see the media talk about attacks on or violence against “minority”. No one can argue the mathematical fact that, when classified by religion, Hindus do form less than half of the country’s population, in fact substantially less than half. But life is more than mathematical facts, and human beings are more than sample data to be labelled and put into bins. We are talking about people who have lived here for generations and would like to live here for many more generations to come. We are talking about young boys and girls who walk to school every morning, and play with friends every afternoon. We are talking about the old man who has formed hundreds of memories and dozens of friendships in his hometown. To cluster them all together, and label them as “minority”, is inhuman and offensive. Some people in this very country are using them like punching bags, killing and maiming them as a way to vent their own frustrations. Can we at least ask the media to not add insult to injury by constantly talking about “minorities”? In some way or another, everyone is a minority. Why tag one group as such for being born into a faith?

Now we come back to 2014. The election has come and gone. It became clear several weeks ago that the primary opposition parties will not be taking part in this election. This definitely strikes a blow to the democratic process, even though I doubt the democratic process leaves much room for the kind of terrors unleashed in the streets over the last few months. The economy is taking a beating, students are on the verge of nervous breakdown, and small business owners face possible bankruptcy. But these are topics for some other time, maybe even by some other individual. It seems that these days everyone has something to say about the election and about democracy. Maybe I am better off being one of the minorities who focus on other things.

In 2002, the BNP-led coalition had won the election, that too with a substantial margin. To celebrate their success, they went on a rampage against non-Muslims. This time around, they chose not to take part in the election and failed to stop it from being held. One could say that this time around, they lost. So what do these people do when they lose and need to vent? They go on a rampage against non-Muslims. Whether these people are happy or sad, whether they are in power or deprived of it, they have their compulsive habit to fall back on – the massacre of non-Muslims.

This country was founded on some principles, principles that everyone seems to have forgotten. This was supposed to be a secular country, where all religions can live in harmony. So far, that promise has failed spectacularly. We have become the worst kind of oppressors. We do nothing to make non-Muslims feel that this is their country. Their religion and customs are often made light of, and it is almost fashionable to always question their loyalty towards Bangladesh, with not-so-subtle hints at which country they would rather live in. The sad truth, it seems, is that most of us do not see the irony in this. First we make them feel unwanted, and then we gripe about how they do not seem to like it here. One needs to be infinitely foolish or infinitely evil to accept such logic.

I don’t know what I could possibly write today that would make a difference. I have the immense fortune, and the immense curse, of living in a country where just by virtue of my name I will never be the target of religious discrimination. I have the good fortune, and the shame, of never being able to realize what it must be like to get kicked out of your own home, and then to be mocked about how you never loved your own home in the first place. Nothing I say will ever matter, because this country has, time and time again, reminded us that there is a wall between me and some of my most favourite teachers. That there is something different between me and some of my students I love and cherish the most. That while I tell them to love this country, to make this country a better place, I cannot even promise them that their families won’t be ransacked the next time some political party is happy, or sad, or just plain bored. I fear that the next time I see my student whose family is in some remote town, I will hear bad news. Worse, I fear that they will ask me why they have to contribute to a country that treats them like a punching bag.

But I still had to write. I don’t know what else I could do, but I had to write, because when evil rises, one cannot sit back complacently. I know that times have changed, that people now at least acknowledge that there is injustice against non-Muslims. I see my students live side by side, loving each other’s culture and traditions, and I hope that someday this country will be theirs to govern. I remember our teachers and how much we loved them, and I know that someday that love and respect will overcome all hate speech. That someday it will be impossible to preach hatred of a different faith, because everyone will accept others as fellow humans in a wonderful journey. It is dark right now, too dark to see. But I can still dream. Someday, this country will be the one we wanted it to be. Someday, the only minorities in this country will be those who do not overcome hatred of all things that are different. I may not see that day. My students may not see that day. But I know that day has to come. It is winter now, and the cold jolts our very bones. But spring has to come.

Hammad Ali is a teacher of Computer Science and Engineering at BRAC University.