The AKP’s Horrible Twist in Syria 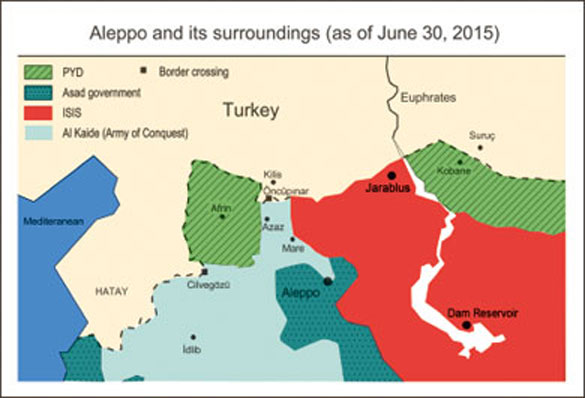 The ruling Justice and Development Party's (AKP) Syria policy is based on the premise that Syrian President Bashar al-Assad should be toppled, regardless of the consequences. Especially for such a complex issue as Syria, it is quite difficult to call this a genuine strategy, as it is rather an obsession.

Since the early days of Syria's civil war, Ankara has pursued a policy of regime change in Damascus through foreign military intervention. To this end, it has extended logistical and military support to all combatants, as well as free passage to Syria, without discrimination, so long as they claimed that they would topple the Assad regime. Until recently, this policy was carried out under the pretence of helping the "moderate" opposition.

As, actually, there existed no such moderate opposition of any significant size, the AKP kept toiling to create such organizations with a semblance of moderation, which it naively believed could hold sway over Syria's ever-deepening tragedy. The Free Syrian Army (FSA) -- which in truth is neither free nor an army -- is but one example of this.

To be sure, the AKP administration carried out this policy in varying degrees of cooperation with a number of countries who cynically called themselves the "Friends of Syria." Now that the country is ruined, and estimates of the number of massacred Syrians range from 200,000 to 300,000 -- not even known to the toll of 10,000 human lives -- there is still no light visible for an end to this tragedy.

However, one thing has long since been known with certainty. In the killing fields, there are only two major powers left: Assad's forces and the fighters subscribing to al-Qaeda's ideology. The latter group consists of a number of jihadist organizations, including the two biggest, the al-Nusra Front and the Islamic State in Iraq and the Levant (ISIL). ISIL acts in defiance of the al-Qaeda centre, but all of these organizations share the austere Wahhabi interpretation of Islam originating from the Arabian Peninsula with al-Qaeda. They all adopt terror to achieve political ends. In Syria, these Wahhabi jihadists sometimes fight together, sometimes against each other. It is likely that they could one day take the easy step of joining forces, as demonstrated by the jihadists smoothly changing sides in the field, depending upon the shifting fortunes of sister organizations.

Meanwhile, the AKP administration made sure that the flow of jihadists and weaponry into Syria remained undisturbed. The US State Department disclosed that since the summer of 2014 about 10,000 ISIL jihadists have been killed during the air campaign and that almost all the ISIL militants coming to Syria travelled through Turkey. Since the number of jihadists in the area has risen, not fallen, some 10,000 ISIL jihadists must have crossed the Turkish border during that time. Dr. Serhat Erkmen, a researcher at the 21st Century Turkey Institute, estimates this number at more than 7,000. These figures only cover ISIL militants, excluding jihadists from al-Nusra and other groups. It should be noted that, under the orders of AKP officials, to date not even 100 terrorists crossing the border illegally have been arrested by Turkish authorities.

Hard evidence has also surfaced in the Turkish media about weaponry delivered across the border to the al-Nusra Front and ISIL jihadists. In January 2014, local public prosecutors stopped and searched trucks carrying heavy weapons to Syria. These prosecutors were later arrested and now are being tried in court. The testimony of one of the prosecutors contains clear evidence that the weapons were being delivered across the border to Ahrar Al-Sham (Army of Conquest), an al-Qaeda organization in close partnership with al-Nusra. A recent report in the Turkish daily Cumhuriyet provided legal testimony from the drivers of two buses that went over the border to an ISIL-held area in Syria, under the protection of Turkish intelligence officers. The buses were loaded with ISIL jihadists and weapons.

As it became clear that the so-called moderate forces, especially in northern Syria, had little military use, but could be kept mainly for show purposes to the international community, this March, the AKP, in cooperation with Syria's enemies in the Arabian Peninsula, created a new organization called the Army of Conquest. This name actually refers to an umbrella structure involving about seven to eight groups that have long been fighting in Syria. The vast majority of the jihadists under this new umbrella belong to the al-Nusra Front and Ahrar al-Sham. There has been a steady flow of logistical support and arms to these groups via Turkey. The Saudis and Qatar provide the money. The logistical support and arms flow generally goes through the Öncüpınar and Cilvegözü border crossings. The Army of Conquest soon won victories, and retook Idlib and the surrounding rural areas from Assad's forces. They began preparing for an operation to take Aleppo.

In June, the Kurdish People's Protection Units (YPG), linked to the Kurdistan Workers' Party (PKK), took control of Tel Abyad. This was the harshest strategic blow to the AKP's Syria policy yet. Firstly, it allowed the Kurds to take control of the Syrian side of the border from the Euphrates to Iraq. Secondly, the Kurds have shown the whole world how easily the border could be sealed against the flow of jihadists. Thirdly, that inflow is now restricted to a 120-kilometer stretch of border, of which only 30 kilometres is controlled by the al-Nusra Front (Army of Conquest) and the rest by ISIL (see map).

The AKP government then gave the military instructions to prepare for intervention in Syria. The rationale presented to the public was that Turkey wouldn't tolerate a Kurdish state forming along its border. I analyzed the possible repercussions of such a military operation in another article, warning that this could lead to the rapid breakup of Turkey. (“The Turkish military intervention in Syria is wrong from A to Z,” Zaman, June 29, 2015).

However, it is naive to believe that the AKP's only motivation was preventing a possible Kurdish state. This became clear in a striking journalistic report by Deniz Zeyrek (Hürriyet, June 29, 2015). It disclosed that the military was asked to support Syrian opposition forces in the area, namely al-Qaeda-affiliated groups such as al-Nusra and Ahrar al-Sham. The Turkish military, a member of NATO, was to provide weapons and equipment as well as protection by howitzer fire. As the plan went, the Turkish military would help clear the area of ISIL while keeping Kurdish forces beyond the Euphrates in the east. In this way, the 120-kilometer stretch from Azaz to Jarablus would be surrendered free and clear to al-Qaeda-affiliated groups by a NATO army. One of the arguments used by the AKP was that this plan could be acceptable to the US, as it considers ISIL its number one enemy.

As the same report underlines, the military staff opposed this plan on various grounds. Now the military intervention seems to have been put on the back burner. The AKP's track record in Syria is full of failure after failure. However, the desperate attempt to engage the Turkish military to bolster al-Qaeda-affiliated terrorist groups represents a horrible twist in that record.

Yet this frightening approach recently shifted into a higher gear. Former Gen. John Allen, US President Barack Obama's special envoy for the global coalition to counter ISIL, met with Turkish Foreign Ministry officials earlier this month. Allen was accompanied by a group of Pentagon staff. The US was seeking the use of the İncirlik Air Base in Adana for its air campaign against ISIL. Extended negotiations took place over two days. As Turkish newspapers reported, the conditions put forth by Ankara were more or less the same: The US would agree to keep the Kurds to the east of the Euphrates, clear the ISIL-controlled area between Azaz and Jarablus and turn them over to the "Syrian opposition" -- or, speaking plainly, to the al-Qaeda forces in that region. We don't yet know what exactly the US and Turkish sides agreed to and what they didn't.

The next big target of the al-Qaeda-affiliated al-Nusra Front and Ahrar al-Sham is to "liberate" Aleppo. That battle has already begun. They declared that they will set up a new caliphate, similar to the one established by ISIL to the east. This would mean the transformation of a multi-cultural and multi-religious region into one of the most intolerant places on earth. Not only Christians, Armenians and Alevis, but even Sunnis who don't bow down to the Wahhabi interpretation of Islam, with its infamous barbarities, would have no place in it. This is what happened in Syria's Idlib province when it fell to the Army of Conquest.

If that is pulled off through NATO armies, with the US in the lead, it would be a gruesome twist indeed.

Haluk Özdalga is an Ankara deputy.