If Saddam Was Bad, Then Rate the ISIS

Whatever else you may say about the “young war criminal” (as British journalist Alan Watkins used to call former Prime Minister Tony Blair), he certainly fights his corner with great determination. He is condemned to spend his life defending his part in the invasion of Iraq in 2003, and last weekend he was at it again. In a 3,000-word essay on his website, Mr Blair wrote about last week's conquest of almost half Iraq's territory by the fanatical fighters of ISIS (Islamic State of Iraq and Syria): “We have to liberate ourselves from the notion that ‘we' have caused this. We haven't”. What he really meant by ‘we’, of course, was ‘I’. And he would say that, wouldn't he? 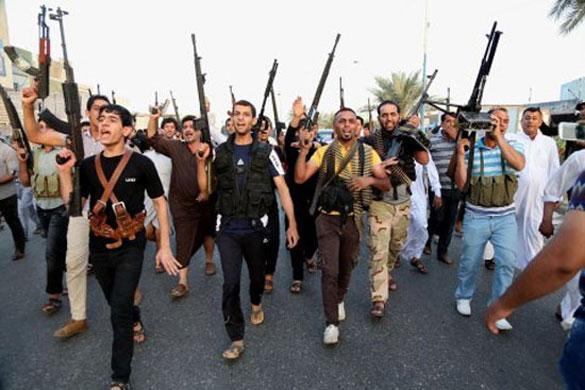 Iraqi Shiite tribal fighters deploy with their weapons while chanting slogans against the al-Qaida inspired Islamic State of Iraq and the Levant (ISIL), to help the military, which defends the capital in Baghdad's Sadr City, Iraq, Friday, June 13, 2014.  AP Photo/Karim Kadim

But let’s give Mr Blair credit for producing an interesting argument: “As for how these (recent) events reflect on the original decision to remove Saddam”, he wrote, “... (The argument) is that but for the invasion of 2003, Iraq would be a stable country today.... Consider the post 2011 Arab uprisings. Put into the equation the counterfactual — that Saddam and his two sons would be running Iraq in 2011 when the uprisings began. Is it seriously being said that the revolution sweeping the Arab world would have hit Tunisia, Libya, Egypt, Yemen, Bahrain, and Syria...but miraculously Iraq, under the most brutal and tyrannical of all the regimes, would have been an oasis of calm? So it is a bizarre reading of the cauldron that is the Middle East today, to claim that but for the removal of Saddam, we would not have a crisis.”

Mr Blair is employing one of his favourite techniques: Winning an argument with a straw man. Nobody is actually saying that if the United States, Britain and some hangers-on had not illegally invaded Iraq in 2003, the country would be an ‘oasis of calm’ today. Of course the ‘Arab Spring’ would have come to Iraq too, and of course there would be huge turmoil in the country today.

If Saddam Hussein had managed to hang on to power in the face of a democratic uprising in 2011 that was initially non-violent, Iraq today might be in a civil war somewhat like that in Syria. And if his dictatorship had been overthrown in 2011, whatever new Government emerged in Iraq would certainly be contending with acute ethnic and sectarian rivalries today. But the living standards, infrastructure, and health and educational services of a quite developed country would not have been massively degraded by a decade of invasion, foreign occupation and popular resistance. Hundreds of thousands of Iraqis who were killed in these events would still be alive (although Hussein's secret police would have murdered the usual thousand or so each year). And above all there would be no ISIS, nor anything like it.

There were no terrorists in Iraq in 2003. There were people with radical Islamist ideas, but they kept quiet for fear of Hussein's torturers, and there weren't very many of them. And there were no weapons of mass destruction either. It was an exceptionally dumb war, to borrow Mr Barack Obama's famous phrase, and it began the destruction of Iraq. It was the fight against foreign occupation after 2003 that radicalised people in Iraq and drove so many of them back into narrow sectarian identities. ‘Al Qaeda in Iraq’, the original name for what now calls itself ISIS, was born in that struggle, and Mr Blair and Mr George W Bush were its midwives.

If there had been no invasion, and Hussein had been overthrown by a popular revolution only three years ago, there would certainly be great tension in a newly democratic Iraq now. Sunni Arabs would be having trouble coming to terms with their minority status. Shias would be tempted to exploit their majority status unfairly. Kurds would be pushing for more autonomy. But they would be doing so in an atmosphere that had not been contaminated by a decade of sectarian hatred and savagery. There would be no organisations like the ISIS dedicated to waging a sectarian war. And even if Hussein had not been overthrown and Iraq was caught up in a civil war like Syria's, it would have had a far less sectarian character. As would Syria’s, for that matter.