Why Jordan King’s India Visit Is Significant for Promoting the Amman Message of Non-Takfiri Islam in India? 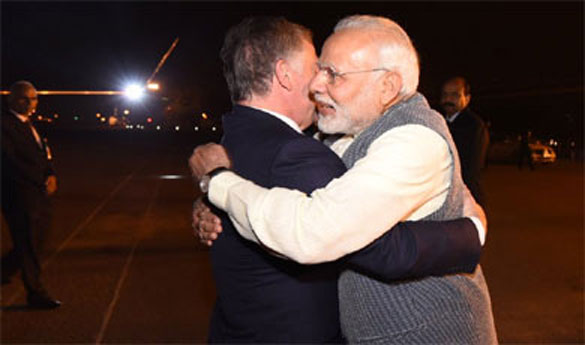 King of Jordan Abdullah II bin Al-Hussein is on a 3-day visit to the country starting on February 27. According to the media reports, Jordanian King’s special lecture slated in Delhi’s Vigyan Bhawan is themed “Islamic Heritage: promoting understanding and moderation”. He is expected to highlight India's role in combating extremist thoughts by averting the threats of ISIS and al-Qaeda, as several media outlets reported. The topic has reportedly been selected by the king himself to address an audience that includes academics and Islamic scholars, as well as representatives of all denominations of the Indian Muslim community.

That India’s religious plurality will be highlighted in this event as key to success in mitigating the influence of extremist Islamist groups such as ISIS and al-Qaeda is pertinent. Undeniably, only in the pluralistic ethos of the inclusivist Indian polity, the Vedic tradition, Gnosis of Gautam Buddha, Non-Violence of Mahavir Jain, Sikh teaching of the Devine Unity as well as the Monotheism of the Semitic religions are brought together. This is the land where Islam arrived in the very age of Prophet Muhammad (pbuh), and as recorded in history, the first mosque had been built in Kerala at that time. Thus, India’s ancient cultural and civilisational force has great potentials stemming from its inclusive religious traditions, to curb extremist thoughts and hardcore philosophies of all kinds.

In this event which would be the first of its kind for New Delhi, particularly worth mentioning is an authoritative work on the essence of Islam tilted “A Thinking Person's Guide to Islam: The Essence of Islam in 12 Verses from the Qurʼan”. An Urdu translation of this book authored by King Abdullah’s cousin and renowned Islamic thinker, Prince Ghazi Bin Mohammad will be launched in the same premise of Vigyan Bhavan. Thus, a vital significance of this event lies in this book. Detailing how countries like India have escaped jihadist influences due to the most moderate and tolerant strand of Islam—non-Takfiri Hanafi Islam—being largely practiced in the country, the book includes a complete chapter on the “Crisis of ISIS”. It holds vital significance not only because it has been authored by the Prince Ghazi bin Muhammad who is descendant of the Prophet (pbuh), an asset to the Hashimite Kingdom of Jordan and an eminent Islamic scholar engaged in rigorous research and intellectual activism on counter-extremism, but also because the book’s foreword has been written by the King himself, who is known for his global effort of deradicalisation. He is also custodian of the Al-Aqsa mosque, the third holiest site in Islam.

Tellingly, when it comes to counter-extremism, Indian Muslims of all hues have created a melody. In India, leaders of all Islamic denominations (Sunni, Shia, Barelwi, Deobandi etc.) and all schools of Islamic jurisprudence (Hanafi, Shafa’i, Maliki) and even on an individual level, every prominent Muslim leader and thinker has categorically denounced the extremist tendencies. As a matter of fact, most anti-extremism Fatwas emanated from India’s Ulema and muftis (Islamic jurists). Both in Sunni-Sufi leadership’s conclave at Ramlila Maidan (World Sufi Forum) in March 2016 and Jamiat Ulema-e-Hind’s multi-religious conference (Aman and Ekta Summerland) at Indira Gandhi Indoor Stadium in October 2017, thousands of Indian Muslims came together to adopt a declaration of peace, pluralism and counter-extremism, castigating every form of violence as ‘anti-Islamic’ (Ghair Islami), ‘anti-national’ (Khilaf-E-Watan) and ‘anti-humanity’ (Ghair Insani). Even relatively more conservative Islamic groups in India like Jamiat Ahl-e-Hadis, Jamat-e-Islami and Tablighi Jamat launched anti-terror Fatwas loudly claiming to protect the Muslim society from the ideological influences of the violent extremists.

But despite these large-scale conferences on counter-extremism, the Indian Ulema have not yet stemmed the tide of Takfirism, which is ideologically rampant, though not violent, in India. Counter-Takfirism is what Indian Muslims can particularly learn from the progressive Islamic leadership of Jordan. Remarkably, King Abdullah II bin Al-Hussein exerted concerted efforts to combat the Takfirist theology. His declaration of the “Amman Message” unravelled a crucial Islamic consensus (Ijma’a) of the world’s leading Muslim scholars in the capital of Jordan. They developed an Islamic consensus (Ijma’a) on three points: (1) inadmissibility of accusing others apostates (Takfirism) (2) inviolability of their blood, honour and property (3) audacity of those not qualified in issuing religious rulings or Fatwas.

Indian Ulema must adhere to these cogent points in letter and spirit in order to counter Takfiri extremism in India. These three points have been explained in the Amman Message as the following:

(2) There exist more commonalities between the various schools of Islamic jurisprudence than there are difference between them. The adherents to the eight schools of Islamic jurisprudence are in agreement as regards the basic principles of Islam. All believe in Allah (God), and that the Qur’an is the Revealed Word of God preserved and protected by Him, from any change or aberration; and that our master Muhammad (pbuh) is a Prophet and Messenger unto all mankind. All are in agreement about the five pillars of Islam: the two testaments of faith (Shahadatayn); the ritual prayer (Salat); almsgiving (Zakat); fasting the month of Ramadan (Sawm), and the Hajj to the sacred house of God (in Mecca). All are also in agreement about the foundations of belief: belief in Allah (God), His angels, His scriptures, His messengers, and in the Day of Judgment, in Divine Providence in good and in evil. Disagreements between the ‘Ulema (scholars) of the eight schools of Islamic jurisprudence are only with respect to the ancillary branches of religion (Furu`) and some fundamentals (Usul) of the religion. Disagreement with respect to the ancillary branches of religion (Furu`) is a mercy. Variance in opinion among the ‘Ulema (scholars) “is a mercy”.

The Amman Message was issued on 9th November, 2004, during the month of Ramzan. It was reiterated on 26th July, 2006 by King of Jordan, Abdullah II bin Al-Hussein. The preamble of this universal declaration of the Hashemite Kingdom is this verse in the Qur’an (2:185) that states: “O humankind! We created you from a male and female, and made you into peoples and tribes that you may know each other. Truly the most honoured of you before God is the most pious of you. (49:13)”

The King of Jordan read it aloud in the Masjid Al-Hashimiyyin, acknowledging all the schools of Islamic jurisprudence, affirming discussion and engagement between them and ensuring mutual understanding, moderation and dialogue with others. It also called for casting aside theological polemics between Muslims and unifying their stances; reaffirming their mutual respect for each other; fortifying mutual affinity among their peoples and states and strengthening the ties of universal brotherhood .

In his summative points, the King of Jordan explained how Islam honours every human being, regardless of his colour, race or religion, quoting this verse from Qur’an: “We have honoured the sons of Adam, provided them transport on land and sea, sustained them with good things, and conferred on them special favours above a great part of our creation. (17:70)”

There is no denying that such an Islamic heritage is an integral part of human endeavour for a civilized society based on the ideals of inclusivity, moderation, plurality and toleration that counter exclusivism, extremism, religio-supremacy and fanaticism. Therefore, these humane values in the current Islamic discourse must be celebrated and consecrated both in Muslim-majority and democratic countries. But at the same time, the framework needs to remain in harmony with the achievements of human civilization.

The Hashemite Kingdom of Jordan is seeking to promote the very luminous Islamic heritage which fosters the principles of moderation and reconciliation, justice and equality, good governance and wider political participation, rule of law and protection of human rights, social justice, transparency and accountability. It has also established a wide platform for the believers of different religions to meet the other upon the common ground (Kalima Al-Sawa) for the service of human society, without encroaching upon creedal distinctions and intellectual freedom. It bases its drive on this Qur’anic exhortation: “Each one believes in God and His angels and His scriptures and His messengers. We make no distinction between any of His messengers—and they say: ‘We hear, and we obey. [Grant us] Your forgiveness, our Lord. Unto You is the journeying,’ (2:285).

In the Assembly for Moderate Islamic Thought and Culture convened in Amman, King Abdullah II stated: “True Islam forbids wanton aggression and terrorism, enjoins freedom of religion, peace, justice and good-will to non-Muslims. It is also a message of good news, friendship and hope to the whole world.”

Several Indian Islamic scholars, who participated in signing the Amman Message against Takfirism, strongly believe that if the Amman Message is truly practiced in Muslim societies, it will end the pernicious spade of violent extremism.

Ghulam Rasool Dehlvi is a scholar of classical Islamic studies, cultural analyst, researcher in media and communication studies and regular columnist with newageislam.com