The Supreme Court has categorically outlawed ‘the use of religion in the electoral processes’. The verdict rules that the election of a candidate would be declared null and void if an appeal is made to seek votes on the religious grounds. A seven-judge Constitution Bench held that an election will be annulled not only if votes are sought in the name of the religion of the candidate but also when such an appeal hinges on religion of voters or candidate’s election agents or by anybody else with the consent of the candidate. Remarkably, this SC ruling has gained a 4-3 majority endorsement.

More to the point, the verdict is inclusive of the religious and spiritual leaders, often engaged by candidates to mobilise their followers. The Indian Express wrote that “the majority view interpreted Section 123(3) of the Representation of the People Act to mean that this provision was laid down with an intent to clearly proscribe appeals based on sectarian, linguistic or caste considerations; to infuse a modicum of oneness, transcending such barriers and to borrow Tagore’s phrase transcend the fragmented ‘narrow domestic walls’ and send out the message that regardless of these distinctions, voters were free to choose the candidate best suited to represent them”.

As various secular and liberal political parties brace for the UP-assembly elections, the above SC ruling has come crashing down the political ambitions of a few newly-formed Muslim parties with soaring dreams of a self-styled Islamic governance system. Clearly, it had to come as a shock to the religio-politicians whose agendas are relying on the ulterior religious motives rather than secular principles of inclusive democracy.

According to media reports dated Jun 16, 2016, a political coalition called in Urdu “ittehad front” has been formed by a dozen of the UP-based scattered Muslim parties. A number of political Islamists having a limited base among Muslims in UP, have formed the front. There are almost eight political Islamist parties in Uttar Pradesh, which aim at ‘saving the secular votes’ in the state. These are as the following:

More surprisingly, an “Islam Party” is seen in Azamgarh district of Uttar Pradesh ahead of the assembly elections. According to a news report in The Asian Age (16 Dec, 2016), a poster released by this UP-born new Islamic party emphatically stated: “there is only one way to establish Islamic rule in India — Islam Party”.

This poster of Islam Party blatantly urged the Muslim voters to cast their vote in the name of religion. A picture of the party’s national general secretary, Aftab Qamar Ansari revealed that he would be contesting the Mubarakpur seat in Azamgarh district, which reportedly has a high percentage of Muslim population. Interestingly, it also happens to be the Parliamentary constituency of Samajwadi Party (SP) president Mulayam Singh Yadav. Mr Ansari opines that that Muslim community had been duped by almost all political parties and it was now time for the Muslims to develop its own party and leadership, as he told The Asian Age. Asked if it was not unconstitutional to seek votes and promote a party ‘in the name of religion’, he retorted, “In that case, the Bahujan Samaj Party should be banned but it survives on Dalits”.

Remarkably, the political Islamist leadership in India that the Islam Party has hinted at is unprecedented in the Indian political history. But no one knows for sure what will happen if the leadership of the Muslims in Uttar Pradesh switches over to the hands of the political Islamists. At present, three Muslim stalwarts seem to have championed this cause of religio-politics: Peace Party national president, Dr Ayyub Khan, National President of the All India Muslim Mahaj Ismail Batliwala and the most recently formed Islam Party’s national general secretary, Aftab Qamar.

A successful surgeon, Dr Ayyub Khan turned politician not long ago. He founded his Peace Party in February, 2008. The party is currently at the helm of affairs of this Islamic coalition of political parties in UP. Dr Ayyub categorically states: “a joint campaign would instil confidence among Muslim voters who feel the need to evolve their own leadership rather than depend on non-Muslims to address their concerns”, as reported in Deccan Chronicle.

In fact, an unwillingness to ‘depend’ on or have ‘trust’ in the non-Muslim or secular leaders is precisely why the political Islamist leaders have established their coalition in UP. Another major cause is the growing ‘fear’ of communal polarisation. “In the past two years, Muslims have been in the firing line after the Muzaffarnagar riots even though the community bore the brunt of the violence”, says Dr Mateen, the Indian Muslim League’s state president. 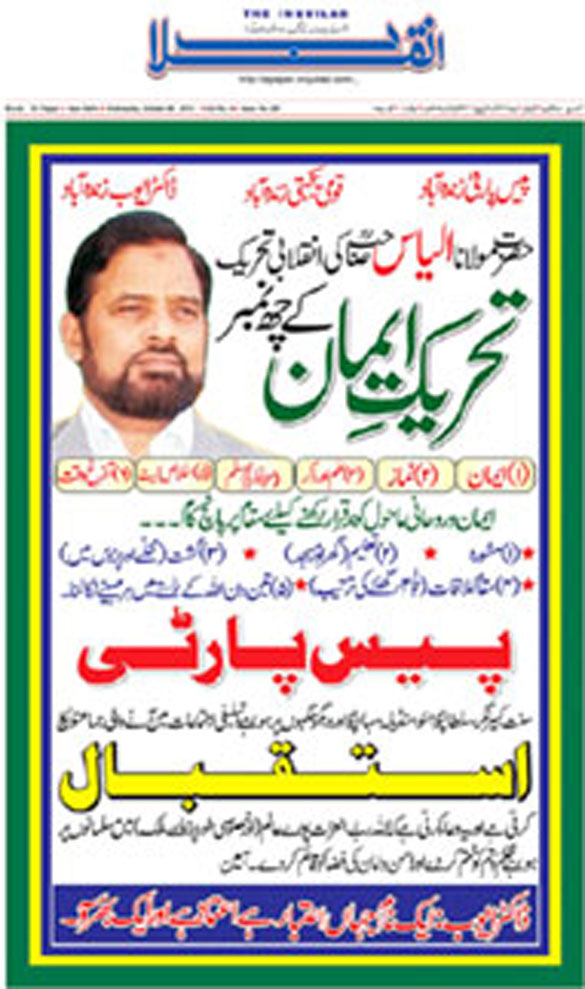 Whatever may be the key reason behind all this, the issue at hand is that the fledgling political Islamists in Uttar Pradesh are categorically seeking votes and promoting their parties in the name of Islam and thus brazenly violating the SC’s ruling. Strong evidences point to this major churn in the community. The recent political promos of Dr Ayyub’s Peace Party published in the leading Urdu dailies substantiate the point that UP’s political Islamists are arousing religious passions of Muslim voters during the UP-election campaigns. On October 26, 2016, Peace Party got an advertisement published in the front-page of the major Urdu daily in India, Inquilab. It is loosely translated in English as, “Party Party urges the Muslims to stick to the six points of the revolutionary Islamic movement “Tahrik-E-Iman” (a one-to-one proselytising Islamic movement which was led by the Tablighi Jama’at founder-ideologue Maulana Ilyas Kandhaulvi) (1) Iman (faith), (2) Namaz (Islamic prayer), (3) ilm-o-zikr (the knowledge and remembrance of Allah), (4) Ikraam-e-Muslim (respect for Muslims), (5) Ikhlas-e-Niyyat (sincerity of intention) and (6) Tafarrugh-e-Waqt (time management for Islamic preaching and proselytization)”.

The Peace Party’s full-page advertisement in Inquilab further reads: “There are five actions for the protection of Iman (faith) and survival of the spiritual environment: (1) the principle of consultation (known as Shur’a in the Islamic terminology] (2) education at home and in the mosques (3) taking the Islamic messages door to door for the sake of faith (4) Holding meetings for half an hour (5) The sparing of time (three days in a month) to serve in the path of Allah”.

Given the SC’s strongly worded verdict prohibiting religion-based appeals and political campaigns in elections, it is indeed a trying time for the Islamist parties in Uttar Pradesh densely populated by Muslims. A senior advocate and former additional solicitor-general Indira Jaising opinionates that the SC ruling will create not only an immediate impact on the forthcoming UP Assembly elections but equally on every subsequent election.  She writes in her Firstpost article: “The judgment is based on a firm understanding of the secular foundations of the India Constitution and the need to ensure that no party can claim that India is a theocratic state. Interestingly, the judgment related to the interpretation of two single words "his religion" in Section 123 which reads as: “Section 123 Corrupt practices — The following shall be deemed to be corrupt practices for the purposes of this Act— …(3) The appeal by a candidate or his agent or by any other person with the consent of a candidates or his election agent to vote or refrain from voting for any person on the ground of his religion, race, caste, community or language or the use of, or appeal to religious symbols or the use of, or appeal to, national symbols, such as the national flag or the national emblem, for the furtherance of the prospects of the election of that candidate or for prejudicially affecting the election of any candidate".