Fighting talk is nothing new in Iran, and cries of ‘economic jihad’ have revived since February’s decree on the ‘resistance economy’ from Ayatollah Ali Khamenei. Despite November’s Geneva interim agreement on the nuclear issue, Iran’s leader is aware of the continuing damage of western sanctions, especially United States and European Union measures that have halved oil exports to 1.1 million barrels a day. After two years of contraction, Iran has every reason to want to improve economic performance, and Khamenei’s decree offers a vision of a ‘resistance economy’ based on higher production, reduced imports, higher investment of energy revenue, financial reform, greater transparency and creating ‘knowledge-based’ industries. 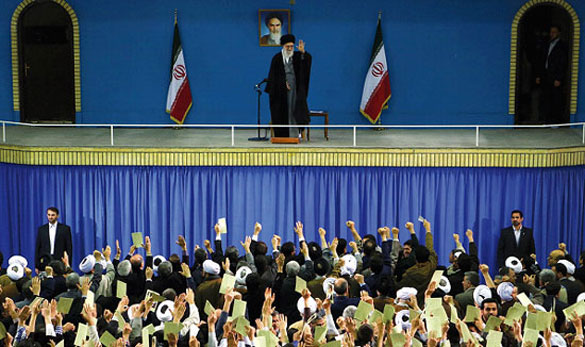 Khamenei first used the term ‘resistance economy’ in 2010, emphasizing Iran becoming more self-sufficient and resilient to outside shocks. Little in the decree — other than perhaps a checklist for state bodies — is new. So why now? According to some observers, the decree reflects Khamenei’s worries over the perilous state of the economy even if sanctions ease with further diplomatic progress.

According to others, it’s all talk. “Everyone will pay lip-service for a while and then the decree will be put on a shelf to gather dust,” an Iranian journalist told me.

In what may be an example of what the journalist means, Hossein Panahian, managing director of the Iran Mercantile Exchange, told a press conference on Kish Island last month that the exchange would contribute to the ‘resistance economy’ by developing more vibrant capital markets.

Enhanced over-the-counter trade might not, however, be the usual idea of ‘economic jihad’, whose origins lie in the heady aftermath of the 1979 revolution and the 1980-88 war.

An early act of the new government was to form Jihad-e Sazandegi (Construction Jihad) to improve rural infrastructure. The body later merged with the Ministry of Agricultural Jihad. Both the Islamic Revolutionary Guard Corps (IRGC) and the Basij volunteer militia took to wartime construction with the same revolutionary enthusiasm shown by their comrades on the front line.

When hostilities ceased, war commander Rafsanjani became president and encouraged the IRGC to adopt peacetime projects. Gradually, the Guards developed an array of business interests and companies. They took the ethos of ‘resistance’ with them, even if many IRGC businesses were soon run by managers in smart jackets from the city.

Tightening sanctions enhanced the IRGC’s role, in import-export (including what might be seen as smuggling) and its affiliated companies also took over projects from  international companies. These included a $1.3 billion gas pipeline from the Persian Gulf to the Pakistani border, the exploration contract for phases 15/16 of the South Pars gas field and a $1.2 billion project to build a line of the Tehran metro.

Naturally, transparency has been limited by ‘security’ considerations, and no reliable figures exist for the IRGC’s turnover. Estimates reach many billions of dollars, and in a rare disclosure, businesses in 2006 were put at 30% of the Corps’ “capacities” by Brigadier General Abdol-Reza Abed, IRGC deputy commander and head of Khatam-ol-Anbia, one of its main companies.

Alongside sanctions, the populist economic policies under former President Mahmoud Ahmadinejad (2005-2013) undermined the private sector, which was less suited to the ‘security’ environment than those with the right connections. But President Hassan Rouhani now wants to develop a vibrant private sector, and has signalled that he envisages a reduced economic role for the IRGC.

All of this might suggest Khamenei’s ‘resistance economy’ decree represents a setback for Rouhani.  But things in Iran are often not what they appear. The decree was drafted by the Expediency Council, which is chaired by Rafsanjani, a Rouhani ally who has long regretted encouraging the IRGC into business in the 1990s.

It is likely that such pragmatic conservatives seek to remould the concepts of ‘economic jihad’ and ‘resistance economy’, thereby undermining opponents who want both to defend the IRGC’s economic position and to undermine Rouhani’s commitment to détente with the US.

Much of the decree’s checklist — including transparency and financial reform — is drawn from a more liberal economic agenda. This is a very different kind of jihad. Like the nuclear talks, the wily Rouhani has won backing from the leader.

Gareth Smyth has reported from around the Middle East for nearly two decades and is the former Financial Times correspondent in Tehran.