So little is known about educator and social reformer Fatima Sheikh that even her date of birth is debated. 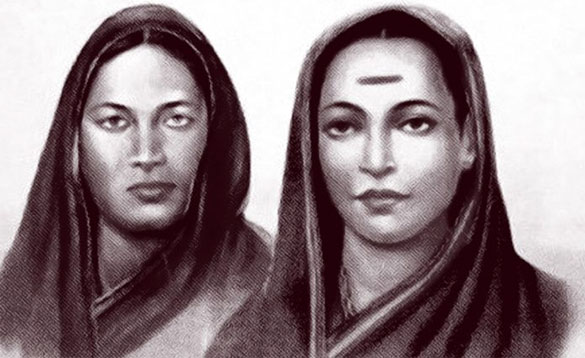 Every year, on 3 January, India celebrates (or at least acknowledges) Savitribai Phule’s birth anniversary. She was the first Indian woman to become a teacher and start a school for girls. However, there was another luminary woman who stood side by side with Savitribai Phule and Jyotirao Phule. She worked in Phule’s Bhidewada school teaching girls, going from house to house encouraging families to send their girls to the school and managing the affairs of the schools. Without her contribution, the whole girls’ school project would not have taken shape. And yet, Indian history has largely relegated Fatima Sheikh to the margins.

This year too, Savitribai Phule trended on Twitter on her birth anniversary. Prime Minister Narendra Modi remembered her by saying: “I bow to the great Savitribai Phule on her Jayanti. Hers was a life devoted to the empowerment of the poor and marginalised.” Many of his colleagues and other political leaders joined in with their tributes. Last year, Google paid homage to her with a doodle. Despite Savitribai’s known anti-Brahminical views and writings, the RSS also bowed to her. University of Poona was renamed Savitribai Phule Pune University and the Maharashtra government has instituted awards in her name. There was even a TV series based on her life and works. Although it took one and a half centuries, Savitribai Phule is now well established in the public sphere. History is giving her due credit.

Fatima Sheikh, however, is so unknown that even her date of birth is debated. Many argue that today, 9 January, is her birth anniversary. Then why is nobody celebrating her?

When Jyotirao and Savitribai were asked to vacate their ancestral house by Jyotirao’s father – as he was angry with the reform agenda of the couple – it was Fatima and her brother Usman Sheikh who opened the doors of their house for the Phules.  It was the same building in which the girls’ school was started. It wouldn’t have been easy for them to do so, considering the fact that the social elite of the time were dead against the idea of girls going to school – and that too from all castes and religions together. And yet, any mention of Fatima Sheikh is largely absent.

This is not to say that the glory came to Savitribai Phule easily. Mainstream historians were very cruel to her – while mentioning the Indian Renaissance, they talked of Ram Mohan Roy, Ishwar Chandra Vidyasagar, Swami Dayananda, Swami Vivekananda, or Mahadeo Govind Ranade. In early textbooks, even the name of Savitribai found no mention. It was only after decades of oblivion that Dalit and Bahujan activists started to write about her, and her pictures started appearing on the banners and posters of BAMCEF, an organisation started by Kanshiram, who later founded the Bahujan Samaj Party. In the last decade, with the advent of digital Dalits, Savitribai’s name and her contribution to society have reached millions through social media.

But the same process has eluded Fatima Sheikh. Her contribution as an educator and social reformer was no less the Phules. Rather, she must have faced bigger hurdles. As her works are not documented, we can only assume how difficult it must have been for a Muslim woman to work for girls’ education, which was considered irreligious at that time, especially in the Hindu-dominated Pune society. Some writers suggest she was opposed by both the Hindu and the Muslim community for what she was doing. Savitribai was fighting against the bigotry of Brahminism. She was an insider, fighting against the ills of the system. Opening the gates of her schools for Dalits was her challenge to patriarchy and the caste system at the same time.

Fatima Sheikh had a different proposition. Islam does not prohibit girls’ education per se. So, her being part of the anti-caste project started by Phule makes her more of a revolutionary.  She was not fighting for her own community alone. Her efforts to introduce modern education to Muslim girls were not liked by the Muslim clergy. We know about some of these things because Savitribai, while writing letters to her husband, mentioned the contribution of Fatima Sheikh. A brief profile of Fatima Sheikh is now part of Maharashtra’s Urdu school textbook.

Fatima Sheikh’s Obscurity Can Be Explained Through Three Propositions:

One, Fatima Sheikh never wrote any treaties on her life or work, which is why we know so little about her. On the contrary, Savitribai and her husband Jyotirao Phule, wrote a lot. They penned thesis, essays, plays, and poems and even love letters. Although one can be deterministic, and blame the twice-born historians for ignoring anti-caste reformers like Fatima Sheikh, we must acknowledge the fact that there is not enough material available that can give us a clue about her life and contributions.

Two, Savitribai and Jyotirao Phule fit well in the anti-caste social movement narrative in Maharashtra. Their writings and works resonate with the Dalit-Bahujan movement. A range of scholars like Gail Omvedt and Rosalind O’Hanlon has documented their contribution in this sphere, and B. R . Ambedkar dedicated his book Who were the Shudras to Jyotiba Phule. On the contrary, the Dalit-Bahujan movement largely ignored the contribution of Fatima Sheikh. We don’t know the reason for this. The Dalit movement effortlessly adopted non-Dalit ‘backward class’ icons like Phule, Shahuji Maharaj, Narayana Guru, Basavanna and others, but failed to acknowledge the likes of Fatima Sheikh. It is for the researchers to find out if this is due to the sectarianism of the anti-caste movement or some other reason.

Three, even Muslim scholars largely ignored the contributions of Fatima Sheikh. A Muslim woman, fighting for a casteless society and for modern education for girls probably does not gel with the dominant Muslim narratives. Fatima Sheikh and Savitribai established the school for girls in 1848. Sir Syed Ahmed Khan established Muhammadan Anglo-Oriental College in 1875, which later became Aligarh Muslim University. Khan is considered as one of the harbingers of modern education in India and rightfully so. But Fatima Sheikh was not accorded the same status despite doing equally pioneering work.

Fatima Sheikh continues to fight for her rightful place in history.

Dilip Mandal is a senior journalist.