Brushing aside condemnation from Western powers, China’s leader, Xi Jinping, called his policies in the ethnically divided region of Xinjiang a “totally correct” success, and vowed more efforts to imprint Chinese national identity “deep in the soul” of Uighurs and other largely Muslim minorities. 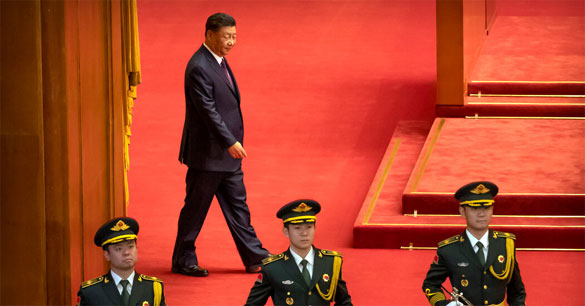 Mr. Xi made the remarks during a two-day conference that ended Saturday, which is likely to set the direction of Chinese policy in Xinjiang for years to come. While the initial official summary of the meeting gave few details, Mr. Xi’s unyielding words signalled that condemnation from the United States, the European Union and other powers has not shifted his determination to subdue Xinjiang’s Muslim minorities through a dual strategy of political indoctrination and state-driven demographic change.

“Viewed overall, Xinjiang is enjoying a favourable setting of social stability with the people living in peace and contentment,” Mr. Xi told the meeting, according to the summary issued by Xinhua news agency. “The facts have abundantly demonstrated that our national minority work has been a success.”

Mr. Xi’s speech was revealed at the end of a week that exposed the stark costs of China’s security strategy in Xinjiang, as well as continued international ire over the indoctrination camps and detention sites that have held hundreds of thousands — and possibly a million or more — Muslim minorities in Xinjiang. But Mr. Xi gave no signs of markedly softening his policies there.

The Chinese Communist Party’s strategy in Xinjiang had been proved “totally correct,” Mr. Xi said, adding that “it must be held to for the long term.”

The implications of Mr. Xi’s latest comments on Xinjiang may take months, even years, to become clear. Mr. Xi used a similar meeting in 2014 to demand a much tougher approach to unrest, resistance and separatist violence in the region.

Ever since Chinese Communist Party forces took over Xinjiang in 1949, the authorities have struggled to establish lasting control over the region’s Uighurs, Kazakhs and other minorities. Their Turkic language and Muslim traditions have set them apart from China’s Han majority, and many members of these minorities have resented the expanding presence and power of the Han Chinese majority.

After a string of attacks and protests by Uighurs, Mr. Xi set policy in Xinjiang on a more radical course after 2014, leading to the construction of hundreds of indoctrination camps intended to weaken Uighur and Kazakh adherence to Islam, and to turn them into loyal citizens who disavow separatism. At the same time, the Chinese government has tried to uproot hundreds of thousands of Uighurs from villages and assign them urban and factory jobs, where officials hope they will earn more and cast aside their traditional lifestyles.

The Chinese government has kept building detention facilities in the region, including hulking prisonlike complexes hemmed by high walls, the Australian Strategic Policy Institute said in a report released on Thursday. Separately, another report released by the Institute, and a parallel investigation by The New York Times, found that thousands of mosques, shrines and other Islamic religious sites have been demolished in Xinjiang since 2017.

In his published remarks, Mr. Xi did not expressly mention the indoctrination camps, which Chinese government officials have defended as a friendly vocational training centres. Even so, Mr. Xi’s broad comments suggested that he wants the government to continue indoctrination efforts across Xinjiang, even if the camps play a reduced role in that campaign.

A Times investigation last year cited internal speeches by Mr. Xi in 2014, when he called for all-out “struggle against terrorism, infiltration and separatism” in Xinjiang using the “organs of dictatorship,” and showing “absolutely no mercy.” But it took years for his broad demands to lead to mass detentions into the new camps.

At his latest meeting, Mr. Xi’s published remarks sounded less alarmed than he did in 2014, suggesting that his government feels it has a firmer grip on Xinjiang. The published remarks did not mention terror threats but focused on what he said were rising incomes of the people of Xinjiang and government spending.

Mr. Xi’s latest speech appeared to signal that the Chinese government would continue investing heavily in industrial and urban development in Xinjiang. In a recent government white paper, Beijing defended labor allocation programs for rural Uighurs in Xinjiang that many international experts say rely on pressure and coercion to keep the job recruits in their posts.

But products from Xinjiang are increasingly shunned by Western companies, worried that they may be implicated in accusations of using forced labour.

On Wednesday, the House of Representatives approved legislation that would bar imports from Xinjiang unless they were proven not to have used forced labour. The Trump administration has imposed sanctions on officials deemed responsible for policy in Xinjiang, and imposed restrictions on imports of clothing, hair products and technological goods from that region.