By Subhanil Chowdhury and Saswata Ghosh

Official data available in the public domain show that the claims made against Muslims in West Bengal in the election run-up are false.

THE 2021 Assembly election in West Bengal is going to be historic because the Bharatiya Janata Party (BJP) has for the first time emerged as the main challenger to the incumbent government. Until a few years ago, the BJP was a marginal force in the State, but it polled more than 40 per cent of the votes in the 2019 Lok Sabha election. Not surprisingly, with the rise of the BJP, some familiar myths are being propagated about Muslims in West Bengal. 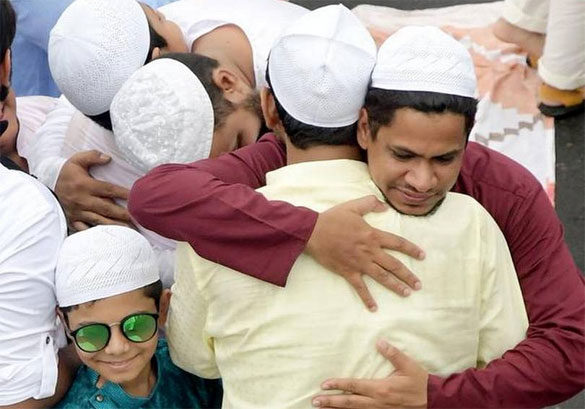 EID PRAYERS at Red Road in Kolkata, a file photograph. Muslims constitute 27 per cent of the population of West Bengal.

First, the agenda of the Citizenship (Amendment) Act, the National Register of Citizens and the National Population Register (CAA-NRCNPR) is based on the premise that there has been a huge influx of illegal immigrants into the State from Bangladesh. BJP State president Dilip Ghosh is on record that there are more than one crore illegal Muslim immigrants in West Bengal, a State where the total population is marginally less than 10 crore. His party promises to drive them out once the NRC exercise is complete. Second, another kind of propaganda says that Muslims have a large number of children and will soon overtake Hindus as the majority in the State. Third, there is appeasement of the Muslim community and it gets a larger share of the benefits that the State government provides.

The main purpose of this article, using official data published by the government, is to demonstrate that these claims are utterly baseless.

It can be argued, however, that looking at gross population figures will not solve the problem. The accusation is that the Muslims are infiltrating into the State even now, particularly in the border districts. We have calculated the growth rates of Hindu and Muslim populations in West Bengal and of all the districts individually for the last two Census rounds. The population growth rate of Hindus and Muslims in 2001 was 14.2 per cent and 25.9 per cent respectively. By 2011, the growth rate of the two communities came down to 10.8 per cent and 21.8 per cent respectively. Even if we look at the districts bordering Bangladesh, the population growth rate of Hindus has declined by 6.75 percentage points, while for Muslims the decline is 4.27 percentage points between 2001 and 2011.

For non-bordering districts, too, both communities have witnessed a decline in the growth rate of population between 2001 and 2011.

If there had been a large-scale Muslim immigration, this decline of growth rates would not have been possible. However, to further explore the issue, we calculate the growth rates of population in each district for Hindus and Muslims and their difference from their respective State average. This is shown in Table 1.

The second important observation from Table 1 is that wherever the Muslim growth rate was higher than the State average, so was the Hindu growth rate. Had there been significant migration into the border districts from Bangladesh, the population growth rate of Muslims would have been higher than that of the Hindus. But this is not the case, which shows that the narrative of large-scale

Muslim Immigration From Bangladesh Is Simply Not True.

This point can be further corroborated by another statistic. In Census 2011, around 22 lakh people reported that their place of birth was in today’s Bangladesh. Fifty per cent of these people were from two districts, Nadia and North 24 Parganas. These people have come from Bangladesh at various points and are currently legitimate citizens of India. Most of them are actually Hindus belonging to the deprived sections. Therefore, the claim made by the State BJP president that there are more than 1 crore Muslim immigrants in West Bengal is not correct.

A frequent grouse of Hindutva advocates against Muslims is that they apparently produce more children and hence they threaten to overtake the Hindu population in the not-sodistant future. Fertility rate denotes the number of children born to women of reproductive age and is the most important demographic parameter to determine child-producing patterns of communities and countries. Is the fertility rate of Muslims very high in comparison with that of other communities? In order to answer this question, we first take a look at international data. Table 2 shows the fertility rates of India and some selected Muslim-dominated countries.

Table 2 shows that apart from Pakistan, Muslim-majority countries like Bangladesh, Maldives and Malaysia have fertility rates that are lower than India’s or almost the same as India’s. Muslims, clearly, do not have a higher propensity for producing children.

In the case of West Bengal, there has been a significant reduction in fertility rates among both Hindus and Muslims over the years, as Figure 2 shows. The State’s fertility rate declined rapidly between 2001 and 2015-16. The decline, which happens to be the largest among all States in India, is sharpest for Muslims. The fertility rate for Hindus has also witnessed a decline way beyond the replacement level (2.1).

To get a further insight into the fertility behaviour of Hindus and Muslims, we undertake another exercise. We select districts of five States where the Muslims constitute more than 15 per cent of the population—west Bengal, Bihar, Uttar Pradesh, Kerala and Assam. We plot the district-level fertility rates in these States for Hindus and Muslims in Figure 3.

Demographic transition requires decades to take place. West Bengal reached replacement level fertility rate (2.1) in the year 2003. The population projection report of 2019, based on 2011 Census data, shows that Bihar will reach replacement level fertility in 2039, Assam in 2020, Chhattisgarh in 2022, Madhya Pradesh in 2028, Uttar Pradesh in 2025. West Bengal achieved replacement level fertility 18 years ago owing to a rapid fall in the total fertility rate both for Hindus and Muslims. In a State where Muslims constitute 27 per cent of the population, such a rapid decline of fertility so long ago would not have been possible without a rapid reduction of the fertility rate in the community. A related canard against Muslims is that Muslim men are polygamous. It is often claimed that Muslims men have four wives. A calculation based on the National Family Health Survey 2015-16 data shows this to be false. For example, 1.64 per cent of Hindu women in West Bengal, and 1.44 per cent in India, have reported that their husbands have more than one wife. For Muslims, the percentage is 2.77 per cent in West Bengal and 2.05 per cent in India. In other words, a minuscule proportion of both Hindu and Muslim men are polygamous.

Lastly, there has been a consistent claim that Muslims in West Bengal are appeased and they are a pampered lot. In order to test this claim, we look at employment figures in this piece (there is no space to look at other parameters).

Even for casual Muslim workers, the monthly average earning is lower in West Bengal than in the rest of India. These statistics do not point to “appeasement” of Muslims. For a better understanding of the “appeasement” argument, we look at the employment of Muslims in colleges and universities in the State. According to the All India Survey of Higher Education, only 3.12 per cent of teachers in colleges were Muslims in 2012-13. The figure increased to 7.8 per cent in 2018-19—a prominent increase in Muslim representation but still way below the community’s population proportion of 27 per cent in the State. We also look at the data of certain prominent universities in West Bengal to see whether the community has entered in a big way into elite institutions of learning.

Table 3 shows that in elite institutions of learning such as Presidency University, Calcutta University and Jadavpur University, the number of Muslim faculty members is abysmally low. Muslim teachers in all the universities of West Bengal accounted for just 4 per cent of all university teachers in 2012-13. The figure increased to 7 per cent in 2018-19.

However, if we remove Aliah University (a university under the Ministry of Minorities in West Bengal, which was earlier a seat of Muslim theological learning named Calcutta Madrasa or Aliah Madrasa established in 1780) from the list, then the proportion of Muslim faculty in West Bengal universities comes down abysmally. A policy of appeasement would have produced a reverse situation.

With the elections approaching in West Bengal, there has been a systematic attempt to spread untruths and half-truths about Muslims in the State. We have showed through an analysis of publicly available data that all of the claims made by the right-wing ecosystem in West Bengal against Muslims are incorrect. West Bengal has a syncretic and secular culture. Hindus and Muslims here have lived with each other peacefully for many decades. It is the need of the hour to preserve those secular values and expose the falsity of the propaganda against our Muslim co-citizens, whose underdevelopment in certain parameters should be corrected through positive government intervention. The community should not be demonised for narrow electoral gains. $

Subhanil Chowdhury and Saswata Ghosh are faculty members at the Institute of Development Studies Kolkata (IDSK).

Acknowledgement: The writers acknowledge the contribution of Dr Ishan Anand and Syamantak Chattopadhyay in helping them with data work.

1 It must be noted that in the years 1981 and 1991, Census operations could not be conducted in Assam and Jammu & Kashmir respectively. As a result, the population growth of India would be higher than what is mentioned here.