Why Maulana Azad's Religious and Political Insights Are More Meaningful in The Current Circumstances?

Maulana Azad was born at a critical phase in history when the whole world was in the grip of a great social, economic, political and cultural conflict. One era of history and civilization was coming to an end and another age was beginning.

This turmoil was manifesting with greater intensity in Europe, where on the one hand, with the decline of the Ottoman Empire, a certain period of Islamic history was taking its last breath, and all European powers were actively involved in expediting this decline and perpetuating it.There was an outpouring of anti-Western sentiments throughout the Islamic world, which created the greatest impacts in India. At the same time, various powers in Europe were at war with each other, as a result of the competition created by the Industrial Revolution and colonization, which was manifesting itself in the shape of a conflict of political interests. 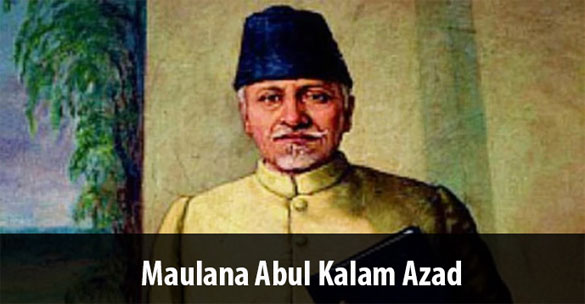 This conflict soon erupted in the form of World War I. At the cultural level, it was a time when people were coming out of the unbridled rationalism of the nineteenth century. As a result, the entire Western civilization was steeped in a great social chaos and spiritual disorder.At that time, India was preparing for a major confrontation against the British imperialism. Gandhi ji had returned home from South Africa and had begun to shape the freedom struggle by combining it with public aspirations. The Congress, under the leadership of Gandhi ji, was advancing the freedom movement in the form of a joint effort of all people of the country, whose ideological basis was peaceful and non-violent resistance.

On the other hand, there were many other ideological positions. Some people believed in armed struggle against the British, while others sought to limit Indian nationalism to the majority community on the basis of religious revivalism. At the same time, there was a group of socialists who were dreaming of an economic revolution in the country based on the Marxist understanding of history and civilization.

Azad, in the midst of these diametrically different and contradictory aspirations, aloof in his intellectual silence and insightful solitude, was outlining a scientific and practical roadmap that later accorded him an unforgettable place in the history of modern India. A sketch was being compiled by the pen of his existential and spiritual conscience, with a balanced synthesis of a righteous rationality and a deep esoteric religiosity. He carried out this task through his translation and commentary of the Qur'an—Tarjuman-ul-Qur’an—which can undoubtedly be regarded in high esteem as the pinnacle of his intellectual and spiritual insights.

In Tarjuman-ul-Qur'an, based on Islam's message of universal human unity and peaceful coexistence, Maulana Azad, interpreted the religion (deen) as a powerful force of freedom that transcends all prejudices and prejudices in human life. This makes a man part of a global human fraternity. In his Qur'anic commentary, Maulana rekindled the fire of freedom granted by Islam which had lifted all the chains worn by man before the advent of Islam, and after which man was not enslaved by anyone except by his Lord. According to Maulana Azad:

“The government should also remember that if we Muslims become ‘true Muslims’, it would be as much in the interest of the government as in ours, and those of our neighbors. It should not be forgotten that if we are true Muslims, we will have the Qur'an in our hands and the hands which are bearers of the Qur'an cannot pick a bomb or a revolver. However, we should not forget that Islam has also taught us to give freedom as well as to achieve freedom. When we were rulers, we gave freedom and now when we are subjugated, we demand the same thing”.

The social and political conditions of the country had reached a stage when it was certain that the unity and joint efforts of Hindus and Muslims were a prerequisite for the liberation of India from foreign domination. In the light of his Islamic insight, he stated:

"It is the duty of the Muslims of India to make a covenant of love and unity with the Hindus of India, and with complete sincerity, become a nation together with them…..I want to tell the Muslim brethren that the greatest voice that can be heard after the voice of God was the voice of Prophet Muhammad (PBUH). He wrote the testament inthese words: We are one Ummah i.e. One Nation. We make peace with all the tribes living around Madinah and we all want to be one Nation together. Ummah means ‘nation’ and Wahid means ‘one’ (unity).”

Maulana Azad's message of unity was not the result of any political coercion or expediency but rather a manifestation of the true message of Islam, which implies the universal brotherhood and the religious and political entente established in the light of the earliestIslamic history.

Maulana Azad wrote in Al-Hilal in the issue of September 1, 1912, addressing the apprehensions of a section of Muslims about the unity with non-Muslims and Muslims’joint efforts with the Hindu brethren:

Have fallen into the cycle of scarcity and abundance. They want to strengthen the numbers but do not strengthen the hearts. There is no need to be afraid of Hindus

The biggest mistake of Muslims [in India] is that they concern themselves with their numeric strength. They want to strengthen their numbers but not their hearts. There is no need to be afraid of Hindus. In fact, one should be only afraid of God. If you want to stay in India and live in this land, then make reconciliation with your neighbours. You have seen the result of living in isolation and separation. If there is an obstacle from them, do not care about it.Even if these peoples do not treat you well, you should treat them well.”

This was the strong conviction that Maulana Azad exhibited in his concept of Composite Nationalism which made him the biggest rival of the separatist politics of the Muslim League. To him, the idea of ​​Pakistan was a symbol of defeat that does not behove Muslims. He confidently reiterated his position and said: "I believe that I find the very term of‘Pakistan’ contradictory. It shows that some parts of the world are pure (pak) and others impure (na-pak). This man-made division of purity and impurity is not only un-Islamic but also contrary to the spirit of Islam. Islam does not accept any such division because the Prophet (PBUH) himself has said that God has made the whole world a mosque for him. ”

Maulana Azad, in the light of his Qur'anic insight, spiritual consciousness and historical awareness, chosea practical path and never gave it up,though he had to face various accusations in this regard and he suffered cold-bloodedness from his contemporaries and former allies.Even after the partition of India, he fell into a deep loneliness. However, every day since his demise, his thoughts and stances have become more pressing need of the timeand he isproving to be more relevant and meaningful today than ever before.