So What’s New About Mumbai Burning? Our Response 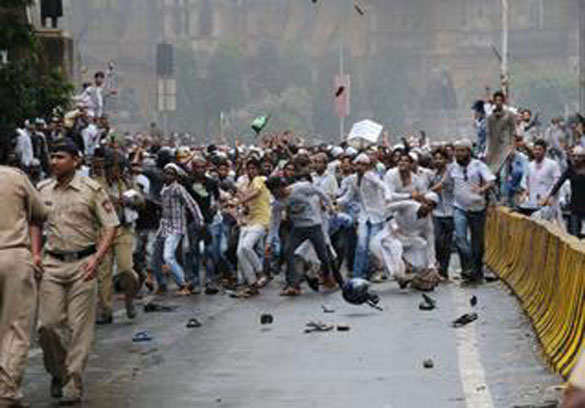 Every time the Shiv Sena and the MNS have gone on the rampage in the city, the State government, police and even media have been mute bystanders

Saturday’s violence by Muslim youth has shaken Mumbai. This is probably the first time that policemen have borne the brunt of the violence — of the 63 injured, 58 are policemen. What kind of mob has the guts to attack the police and think it can get away with it? A Muslim social worker has filed a complaint with the police against the organisers for instigating the public; a Muslim lawyer has gone to the High Court with the same demand. The police have so far arrested 23, charged them with murder and other offences, and set up a Special Investigation team (SIT) to probe the sudden outburst of violence. With tons of visual evidence, it won’t be difficult to identify the rioters.

Despite all these steps, some questions remain. Is it not the organisers’ responsibility to control the crowd they mobilise and ensure that no inflammatory speeches are made? Why aren’t they being arrested, especially since one of the organisers has a record of instigating violence? Why has the man who made the inflammatory speech not been arrested?

Second: why has this flurry of activity not been seen on all the other occasions that mobs have “burnt Mumbai”? While this may be the first time that the police has been targeted, it’s not the first time the media or BEST buses or cars have been vandalised. Indeed, in the last two months, Mumbai has seen frequent displays of such hooliganism. On May 31, observing the National Democratic Alliance-called Bharat Bandh, Shiv Sainiks damaged 42 BEST buses. This despite the chairman and seven of the 17 BEST Committee members being Shiv Sainiks. The chairman explained away the vandalism by saying that “protesters become uncontrollable” on such occasions, and demurred when asked if his party would pay for the damage.

Mid-June saw the new saviour of the Marathi Manoos “kick-off” a campaign against the payment of toll tax. Within 72 hours, three toll nakas were vandalised. Visuals of those actions are pretty similar to videos of Saturday’s violence — the same iron rods, the same smashing of glass. But there was one important difference. After the violence, Maharashtra Navnirman Sena (MNS) MLA Shishir Shinde declared in audibly slurred tones, his party’s intention to destroy toll nakas. The police obligingly waited till he finished addressing TV cameras before taking him away in their van. Saturday’s videos had no such bravado — after smashing everything in sight, the topi-clad youth could be seen fleeing for dear life from police lathis. Two youngsters died in the ensuing firing.

The fallout of the two incidents however, may not be too different. Today, an MNS sticker on your car can exempt you from paying toll. And last week, the Maharashtra Chief Minister gave an audience to the man behind the violent anti-toll agitation. Accompanying Raj Thackeray at the meeting with the CM was Shishir Shinde. Two days after Saturday’s violence, Maharashtra’s Home Minister gave a clean chit to one of the organisers of Saturday’s rally, the Raza Academy. Don’t be surprised if the outfit’s chief, Maulana Saeed Noorie, is soon seen sharing the stage with R.R. Patil, Congress Minister Naseem Khan and other influential members of our government. After all, Eid is just round the corner. Had the violence not taken place, the rally’s leading lights would have attended the CM’s iftaar scheduled for Saturday evening.

However, those who rioted aren’t getting the same treatment that Shiv Sainiks and MNS rioters do. It can be argued that attacking the police is more serious than attacking public property. But attacking unarmed citizens only because they belong to a particular faith or region — is that less serious? The MNS’s attacks on North Indians, all televised, are just four years old. Two innocents were killed then. When the National Human Rights Commission directed the State to pay compensation of Rs.5 lakh each to the victims’ families, the government spoke of financial problems. Incidentally, the MNS’s unique way of protecting Marathi pride in 2008 cost the State a loss of Rs.500 crore. As for the Shiv Sena’s record of targeting, often fatally, unarmed South Indians, Muslims, media persons, Valentine’s Day lovers, rickshaw drivers — it would be insulting the readers’ intelligence to list the details.

Police failure to anticipate and prevent Saturday’s violence is indeed blameworthy. But what’s new? When the Mumbai police has had indications of Sena-led violence, has it ever tried to prevent it? Forget the 1992-93 riots. In December 2010, the Pune police, apprehending violence at a protest called by the Sena, tapped Sena leaders’ phones and heard Milind Narvekar, Uddhav Thackeray’s PA, instruct Sena MLC Neelam Gorhe (a former Socialist) to gather a mob, burn buses and inform TV channels. Everything went according to plan; 54 buses were burnt. Pune’s Police Commissioner repeated the Maharashtra police’s time-honoured motto: “Preventive arrests would have aggravated the situation” and R.R. Patil supported her, saying the police’s priority was to “safeguard law and order and protect the public.”

When Meenatai Thackeray’s statue was desecrated on a Sunday in July 2006, the Sena ran amok. The same man produced another gem: “If the violence continues on Monday, the police will take action.”

After the Sena attacked the IBN Lokmat office in 2009, senior journalist Kumar Ketkar, whose house had been earlier attacked by Nationalist Congress Party supporters because he had dared criticise the plan to set up a Shivaji statue in the middle of the Arabian Sea, told a news channel: “Mumbai has not become feeble, Mumbai has become used to [such violence]. It was in 1966 when the Shiv Sena was born and ever since Maharashtra has been used to this culture. The Shiv Sena worship and encourage violence. So Mumbai’s youth become more and more involved in this and this is a very dangerous trend.”

The Muslim youth who went on a rampage on Saturday are also part of Mumbai. Maybe they felt they would be treated like their Hindutva counterparts.

Their leaders, knowing that’s not possible, have tendered cringing apologies on TV and asked the culprits to turn themselves in. Imagine any of the Thackerays or Togadias doing that. On the contrary, the celebrity columnists and indignant TV anchors now foaming at the mouth at “Mumbai burning” see nothing wrong in conducting long interviews with the Thackerays, where the latter brazenly defend their tactics.

Jyoti Punwani is a freelance journalist based in Mumbai.