Made At Tahrir, Sealed In Sinai

MILITARY EXIT: There was immense pressure on President Morsi by Tahrir Square activists to act against SCAF and the incident in the Sinai peninsula gave him an opportunity to get rid of the generals. 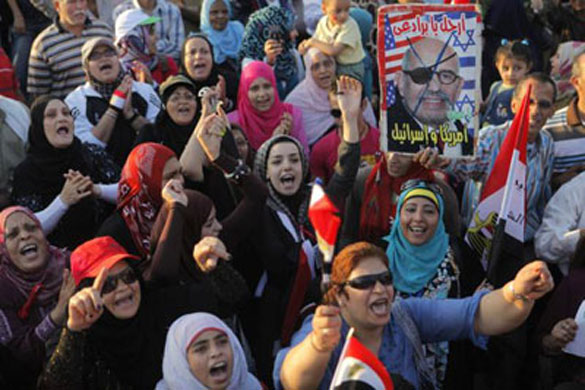 Until a few days ago, the Egyptian military looked invincible but the balance of power now seems to have shifted to the elected government

“It’s a soft coup,” Ramy Yasser said over Skype. His voice was tinged with excitement, his Facebook status equally jubilant as he readied to march to Tahrir Square. Only in November of last year, I had seen Ramy standing on the front lines of Mahmoud Street off Tahrir Square, his eyes bloodshot and wet from the teargas canisters lobbed at his feet by the army. He had run from baton wielding police officers, had taken a hit on his head and seen friends fall to their feet as police fired rubber bullets at the protesters. He yelled then: “Down with Tantawi, Down with SCAF.”

A couple of weeks earlier, on October 9, outside Maspero, the state TV building, Coptic Christians faced the wrath of the army. Only they weren’t as lucky as Ramy. As many as 27 protesters were crushed under the weight of the military’s tanks: soldiers loyal to SCAF — the Supreme Council of the Armed Forces — flattened their bodies.

SCAF looked invincible — until Sunday. So when newly elected President Mohamed Morsi, a soft-spoken Islamist from the Muslim Brotherhood fires two of the most powerful men from the ancien régime, the Egyptian Army, the question is, what gives? Morsi has booted out Field Marshal Tantawi, who was the acting head of state since the revolution and his second-in-commend General Sami Anan. They are now Morsi’s “advisors.”

For long, a tussle between the Muslim Brotherhood and the army had been speculated upon. After all, the military had outlawed the party from political participation. Morsi’s promise of “an end to the Superman era” was viewed with scepticism simply because of the mantle he inherited. The army’s influence was present in all institutions and the balance of power tilted in the generals’ favour. For example, upon assuming power, Morsi had to contend with the generals’ supplemental constitutional declaration that granted them legislative authority. He would be further curtailed by the imposition of the June 13 declaration of martial law that the generals had imposed in order to curtail the powers of the presidency. Days before Morsi assumed his position, Tantawi had re-established the National Defence Council, which placed the generals at the helm of Egyptian security policy.

There are two possible explanations behind the unexpected dismissals.

Tahrir was heating up again. Activists had already called for SCAF’s exit. Anti-Tantawi graffiti in and around Tahrir Square would put more pressure on the government to punish the Maspero massacre perpetrators. “There was a lot of back and forth between the Ikhwan (Brotherhood) and the SCAF. In the end SCAF walked away with a good deal,” says a source in the Defence Ministry. The source viewed it as a “safe exit” for the military men. Look at Mubarak: he’s serving time in prison, with a weak heart, because of the Arab Spring “martyrs.”

Alternatively Morsi rode the Sinai wave. SCAF’s mismanagement of the Sinai crisis, and indeed, the mismanagement by Mubarak and his cronies of the entire peninsula was an opportunity Morsi simply grabbed.

The August 5 militant Islamist attack on Sinai’s border patrol left 16 soldiers dead, the new government red-faced and the generals mum. The public took to the streets again; the generals had been exposed as being more concerned with lining their pockets than ensuring the security of the state.

“Something had to be done and fast,” says Mahmoud Alaa at the Muslim Brotherhood’s Media Centre.

The Sinai incident was Morsi’s and indeed post-Mubarak Egypt’s first major challenge. Morsi was quick to act. He sacked the intelligence chief, Mourad Mowafi, as well as the governor of Northern Sinai and the head of the military police.

Since the attack by the militants, the Egyptian military has launched overnight strikes and ground assaults. Fighter planes have, for the first time since the 1973 war with Israel, entered the Sinai Peninsula. The Sinai was declared a demilitarised zone under the terms of the 1979 peace treaty between Israel and Egypt. Morsi moved in to regain control of Egypt’s anarchic periphery as Egyptian troops now raid villages in the area.

For 18 months, as people power captured audiences around the world, the Sinai quietly descended into chaos. These months of negligence and years of disregard have resulted in a security vacuum in the poorest region of Egypt. Security lapses — officials were informed about a potential attack but failed to act for they believed violence during Ramadan was unlikely — is just one aspect of the bigger problem facing the peninsula.

The vast stretch of desert inhabited by Bedouin tribes has for long been impoverished and marginalised. The people of Sinai are among the poorest in Egypt. The area has traditionally suffered from chronic under investment in health, transport, and education and for long has been viewed as being beyond Cairo’s writ. The outcome is the unchecked movement of arms from Libya and political chaos presided over Bedouin tribes who command control over the gun and the rise in jihadist activity. Camps in the region tell the sorry tale of torture, rape and a burgeoning industry of drugs and arms smuggling.

Still, Morsi will have to keep delivering. Cairo suffers from daily power outages, the price of bread is on the rise and the government struggles to fund a shortfall that has cast doubts over Egypt’s ability to meet the demand for imports of basic commodities such as fuel. Central bank reserves too suffer at $14.42 billion compared with $36 billion under Mubarak. Optimists look towards the “Renaissance Project” that Morsi has floated to deal with problems while sceptics count the number of political prisoners languishing behind bars for daring to have a voice that brought about the change that he embodies.

Alia Allana is a Mumbai-based journalist working on a book on the Arab Spring.