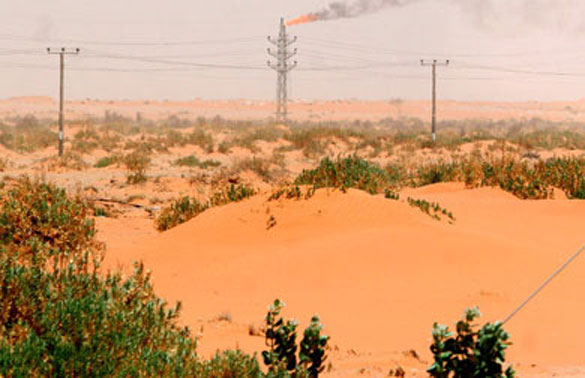 A Saudi oil field. The country has poured billions of its oil dollars into Islamic organizations. Credit Hasan Jamali/Associated Press

For decades, Saudi Arabia has poured billions of its oil dollars into sympathetic Islamic organizations around the world, quietly practicing check book diplomacy to advance its agenda.

But a trove of thousands of Saudi documents recently released by WikiLeaks reveals in surprising detail how the government’s goal in recent years was not just to spread its strict version of Sunni Islam — though that was a priority — but also to undermine its primary adversary: Shiite Iran.

The documents from Saudi Arabia’s Foreign Ministry illustrate a near obsession with Iran, with diplomats in Africa, Asia and Europe monitoring Iranian activities in minute detail and top government agencies plotting moves to limit the spread of Shiite Islam.

Saudi tanks were deployed near their country’s border with Yemen on Thursday. The Saudis are leading a coalition trying to stop the Houthi rebel group, which is backed by Iran. Tensions Between Iran and Saudi Arabia Deepen Over Conflict in Yemen APRIL 9, 2015

The scope of this global oil-funded operation helps explain the kingdom’s alarm at the deal reached on Tuesday between world powers and Iran over its nuclear program. Saudi leaders worry that relief from sanctions will give Iran more money to strengthen its militant proxies. But the documents reveal a depth of competition that is far more comprehensive, with deep roots in the religious ideologies that underpin the two nations.

The documents indicate an extensive apparatus inside the Saudi government dedicated to missionary activity that brings in officials from the Foreign, Interior and Islamic Affairs Ministries, the intelligence service and the office of the king.

At times, the king got involved, ordering an Iranian television station off the air or granting $1 million to an Islamic association in India.

“We are talking about thousands and thousands of activist organizations and preachers who are in the Saudi sphere of influence because they are directly or indirectly funded by them,” said Usama Hasan, a senior researcher in Islamic studies at the Quilliam Foundation in London. “It has been a huge factor, and the Saudi influence is undeniable.”

While the documents do not show any Saudi support for militant activity, critics argue that the kingdom’s campaign against Shiites — and its promotion of a strict form of Islam — have eroded pluralism in the Muslim world and added to the tensions fueling conflicts in Iraq, Syria, Yemen and elsewhere.

The Saudi government has made no secret of its international religious mission, nor of its enmity toward Iran. But it has found the leaks deeply embarrassing and has told its citizens that spreading them is a crime.

It said last month that the documents were related to an electronic attack in March on the Foreign Ministry that was claimed by the Yemeni Cyber Army, a little-known group believed to be backed by Iran. WikiLeaks mentioned the attack when it released the documents.

While Saudi Arabia says some documents were fabricated, many contain correct names and phone numbers, and a number of individuals and associations named in them verified their contents when reached by reporters from The New York Times.

The trove mostly covers the period from 2010 to early 2015. It documents religious outreach coordinated by the Supreme Council for Islamic Affairs, an inter-ministerial body that King Salman dissolved in a government overhaul after his ascension this year.

The Foreign Ministry relayed funding requests to officials in Riyadh, the Interior Ministry and the intelligence agency sometimes vetted potential recipients, the Saudi-supported Muslim World League helped coordinate strategy, and Saudi diplomats across the globe oversaw projects. Together, these officials identified sympathetic Muslim leaders and associations abroad, distributed funds and religious literature produced in Saudi Arabia, trained preachers and gave them salaries to work in their own countries.

One example of this is Sheikh Suhaib Hasan, an Indian Islamic scholar who was educated in Saudi Arabia and worked for the kingdom for four decades in Kenya and in Britain, where he helped found the Islamic Sharia Council, according to a cable from the Saudi Embassy in London whose contents were verified by his son, Mr. Hasan of the Quilliam Foundation.

Clear in many of the diplomatic messages are Saudi fears of Iranian influence and of the spread of Shiite Islam.

The Saudi Embassy in Tehran sent daily reports on local news coverage of Saudi Arabia. One cable suggested the kingdom improve its image by starting a Persian-language television station and sending pro-Saudi preachers to tour Iran.

Other cables detailed worries that Iran sought to turn Tajikistan into “a center to export its religious revolution and to spread its ideology in the region’s countries.” The Saudi ambassador in Tajikistan suggested that Tajik officials could restrict Iranian support “if other sources of financial support become available, especially from the kingdom.”

The fear of Shiite influence extended to countries where Muslims are small minorities, like China, where a Saudi delegation was charged with “suggesting practical programs that can be carried out to confront Shiite expansion in China.” And documents from the Philippines, where only 5 percent of the population is Muslim, included suggested steps to “restrict the Iranian presence.”

In 2012, Saudi ambassadors from across Africa were told to file reports on Iranian activities in their countries. The Saudi ambassador to Uganda soon filed a detailed report on “Shiite expansion” in the mostly Christian country.

A cable from the predominantly Muslim nation of Mali warned that Iran was appealing to the local Muslims, who knew little of “the truth of the extremist, racist Shiite ideology that goes against all other Islamic schools.”

Many of those seeking funds referred to the Saudi-Iranian rivalry in their appeals, the cables showed.

One proposal from the Afghan Foundation in Afghanistan said that it needed funding because such projects “do not receive support from any entities, while others, especially Shiites, get a lot of aid from several places, including Iran.”

Reached in Kabul, the Afghan capital, one of the centre’s founders, Wakil Ahmad Mutawakil, acknowledged that the group had appealed for Saudi funding but said that it had received none.

The kingdom has at times interfered directly with Iran’s outreach.

From 2010 to 2013, it tried to force an Iranian Arabic-language satellite television station, Al Alam, off the air. These efforts included issuing royal decrees aimed at stopping the broadcast, pressuring the Riyadh-based satellite provider Arabsat to drop the channel, and using “technical means” to weaken the channel’s signal so it did not reach Bahrain and eastern Saudi Arabia, where Shiites complain of discrimination by their Sunni monarchs.

A Beirut-based manager of Al Alam acknowledged that the channel had faced Saudi pressure since 2010, which had succeeded in getting two Arab satellite providers to drop the channel.

“We are broadcasting normally” via European satellites, the manager said, speaking on the condition of anonymity to discuss private company matters. “The only disruption we have is when we broadcast a show about Bahrain.”

Some of the cables reported on seemingly mundane events.

The Saudi Embassy in Sri Lanka reported a meeting between the Iranian ambassador and a group of religious scholars, noting that it began at 7:30 p.m.

Elsewhere, the kingdom intervened against foreign officials it perceived as threats.

After the president of the International Islamic University of Islamabad in Pakistan, Mumtaz Ahmad, invited the Iranian ambassador to a cultural week on campus, the Saudi Embassy called Mr. Ahmad to express “its surprise,” according to one cable, suggesting that he invite the wife of the Saudi ambassador instead.

Mr. Ahmad refused to disinvite the Iranian ambassador, so Saudi diplomats suggested having Suliman Aba al-Khail, a Saudi academic with a position in the university’s administration, convene a board meeting and “choose a president for the university who is consistent with our orientation,” the cable said.

A faculty member at the university said that Mr. Ahmad, a political science professor with a doctorate from the University of Chicago, had clashed with conservative faculty members for trying to reduce Saudi influence on campus.

After Mr. Ahmad resigned as president in 2012, the Saudi ambassador worked with the president of Pakistan at the time, Asif Ali Zardari, to have a Saudi citizen named as university president, according to the faculty member.

“In the end they won,” said the faculty member, who spoke on the condition of anonymity so as not to anger his employer.

Saudi Arabia has long invested in training foreign preachers, providing scholarships to international Muslim students to study Shariah at Saudi universities. The documents show that the kingdom gives some of them government salaries to work in their home countries. The cables named 14 new preachers to be employed in Guinea and said contracts had been signed with 12 others in Tajikistan.

Another cable said the Foreign Ministry was studying a request from an Islamic association near the Iranian border in Afghanistan to pay local preachers to spread Sunni Islam.

Some of the costliest projects were in India, which Saudi Arabia sees as a sectarian battleground.

Cables indicated that $266,000 had been granted to an Islamic association to open a nursing college; $133,000 had been used for an Islamic conference; and another grant went to a vocational training centre for girls.

King Abdullah, who died in January, signed off on a $1 million gift to the Khwaja Education Society, and a smaller amount went to a medical college run by Kerala Nadwatul Mujahideen.

A member of the first group, Janab Moazam, confirmed that it had been granted the money and said that half had already been delivered. An official from the second group, Abdullah Koya Madani, confirmed that the group had received Saudi funding.

Even humanitarian relief is sometimes sectarian. In 2011, the Saudi foreign minister requested aid for flood victims in Thailand, noting that “it will have a positive impact on Muslims in Thailand and will restrict the Iranian government in expanding its Shiite influence.”

Elsewhere, Saudi Arabia sees its religious work as a way to improve its reputation. The Saudi ambassador to Hungary requested $54,000 per year for an Islamic association as well as for authorization to found a cultural center. O ne cable said such aid would undermine extremism and “play a positive role in portraying the beautiful and moderate image of the kingdom.”