Ishrat Jahan Fake Encounter: The Constitution Must Not Be Abandoned To Sanctify Street Executions Masquerading As Armed Encounters

It's a Dirty Business

In a country that gave (rightly so) even Ajmal Quassab the benefit of due process, the chilling CBI account, if true, of how a 19-year-old young woman was abducted, drugged and killed in a staged shootout that saw 70 bullets pumped into her and three others, should shame us all. 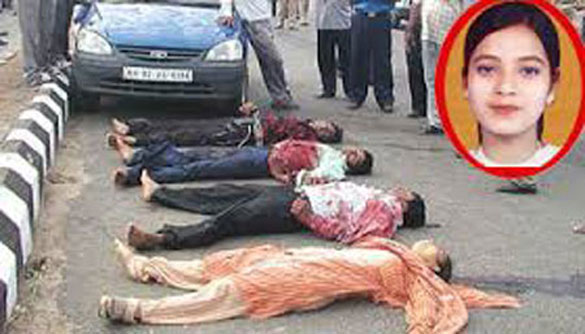 Not because of the gigantic political ramifications of a case which books seven of Gujarat's top police officers and raises serious questions about the culpability of intelligence officials in what the CBI argues is planted evidence, but because while the BJP and the Congress slug it out, the real revelation of the Ishrat Jahan controversy is India's wider culture of tolerance, even endorsement, of fake 'encounters'.

While Ishrat's case has provoked a high-decibel media focus, this same week a sub-inspector (SI) in Punjab should have made headlines, but didn't. The SI from Tarn Taran - once a minefield of militant activity - suddenly announced that he had eliminated 83 people in encounters, several of which were planned set-ups done on the orders of his superiors. In police folklore though, till Surjit Singh broke his silence (the police argued that he'd had too much to drink when he made the statement), he was somewhat of a local hero. By his own admission, he was promoted on a fast track.

Similarly, Maharashtra's police force spawned a whole generation of 'encounter specialists' who were eulogised and feted for decimating the Mumbai mafia. Hundreds of criminals are said to have been killed in these encounters between 1993 and 2003. The men lauded for the 'clean-up' became the subject of glamorous profiles in mainstream media and romanticised impersonations in Bollywood blockbusters, brandishing their guns happily in a display of flamboyant machismo. It has only been in recent years that controversies and serious allegations of human rights violations have ensnared these policemen, previously treated with unquestioning admiration.

Public opinion, discounting exceptions, seems to lean towards looking the other way, when rules are bent. Drawing-room discussions add on a whole set of ifs and buts to what should be a straightforward moral principle - extra-judicial killings have no place in a civilised democracy. The argument offered by those who seek to rationalise the circumventing of a legal process is almost always that no tears need be shed for those who are terror suspects.

The problem with this ex-post-facto justification is that intelligence inputs have often proven to be grievously wrong in court. The whole process of information gathering, by its very nature - and understandably so - cannot guarantee certitudes and yet must pursue even the hint of a lead. But if seemingly suspicious titbits become the basis for pre-meditated killings, the whole foundation of our judicial system - innocent until proven guilty - gets turned on its head.

Even as we ask how and why Ishrat died and at whose behest, the 'encounter' is being validated by those who claim that suspected terror links were enough of a basis to eliminate her and the three men charged by the IB to be Lashkar-e-Taiba operatives. But once again these are allegations mired in controversy and plagued by the absence of certainty.  On the one hand you have the Intelligence Bureau - whose own men are now on the mat - placing on record that no less than David Headley knew of Ishrat as a would-be suicide bomber. But you also have the IB's own argument contested fiercely by the National Investigation Agency (NIA) who sent a team to interrogate Headley in the US. After initially noting down Headley's reference in their case diaries, the NIA eventually dismissed the comments as "hearsay". The investigative agency made the argument that Headley never had direct contact with Ishrat and his comments were based on second-hand information passed onto him by a Lashkar commander who was also quoting another commander. In any case, Headley's inputs - reliable or not - have come only now. He was not an entity known to anyone in 2004 when the 'encounter' took place.

Of course, a certain amount of opacity has to be wrapped around the intelligence community and how it operates. But enough IB officers I know would argue that inputs are never the same as conclusions. From Malegaon to Mecca Masjid, we have witnessed an alarmingly high number of false cases, foisted on innocent young men, initially charged with having terror links, but later acquitted respectably by the courts. In Hyderabad, 100 young Muslim men were taken into police custody for a blast they had nothing to do with. Even if one argues that mistakes made in intelligence gathering are not mala fide in intention, imagine if any of these young men had been bumped off in a staged killing that was later justified as being an encounter with a suspected terrorist. Tragically, even judicial clean chits don't wipe the slate clean. From Kashmir to Kanpur, more than one young man I've met who has battled a false case has struggled to get his life back on track.

Sometimes a person is deemed suspicious on the basis of her ideology alone. In Jammu and Kashmir, for example, civilian deaths often fail to evoke the wider empathy they should because separatist leanings in the Valley have created a hardening of emotions among those who intensely disagree with the dominant politics in one part of the state.

Yet above and beyond all politics is a universal principle. The loss of human life is always tragic. We are a country that applies the death sentence in the rarest of rare cases. That is the constitutional principle that has defined us for decades. The Constitution must not be abandoned - whether by the BJP or the Congress - to sanctify street executions masquerading as armed encounters.

Barkha Dutt is Group Editor, NDTV The views expressed by the author are personal