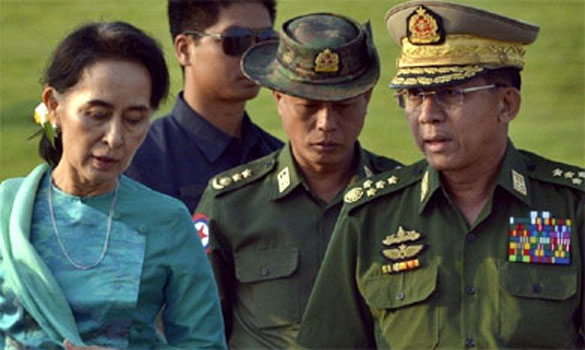 In a stunning development this week, the International Criminal Court (ICC) declared that it has jurisdiction over the Myanmar government’s crimes against the Rohingya minority. This comes not long after the scrupulously conservative United Nations issued a report calling for the military leadership in Myanmar, including Commander in Chief Min Aung Hlaing, to be investigated and prosecuted on charges of genocide, crimes against humanity and war crimes for its “clearance operations” against the Rohingya.

What is even more surprising, however, is that the country’s pro-democracy icon and current de facto leader of the civilian government in Myanmar, Aung San Suu Kyi, has also been identified in the U.N. report as complicit in the abuses.

Although her civilian government has no authority over matters of security, and could not order the armed forces to halt or change their operations, it nevertheless holds power over the political discourse in the country and certain aspects of international relations. And throughout the crisis, the civilian government, including Suu Kyi, has consistently opted to use its power to support the military campaign against the Rohingya, block international efforts to investigate and document events on the ground, including previous efforts by U.N. agencies, and support the Buddhist-nationalist narratives used to justify the removal of the Rohingya from their country of birth.

Suu Kyi’s stance has also paralyzed the international humanitarian response — certainly in Western capitals. Western leaders feared that exceedingly robust criticism would undermine Suu Kyi’s position in the country, and that doing so would hand untrammeled power back to the erstwhile military junta. The West watched patiently as more and more Rohingya refugees poured over the border into Bangladesh, in the hope that Suu Kyi would eventually find a way to assert herself and intervene on their behalf. And some Western leaders, such as Senate Majority Leader Mitch McConnell (R-Ky.), continue to urge patience on behalf of Suu Kyi, even now.

Others, however, such as the outgoing U.N. human rights chief, Zeid Ra’ad al-Hussein, have now come out to say that Suu Kyi should have used her position to intervene on behalf of the Rohingya throughout the events of the past year. She could have resigned, her critics say, and taken popular support with her away from the military leadership at any point during the “clearing operations.” She could have opted to say “not in my name!” Her decision to not only remain silent on the abuses, but to also actively try to shield the military from international criticism, do make her complicit in the crimes against humanity that have taken place.

But her supporters are right about one thing: This crisis will not be resolved without Suu Kyi. She has consistently made the wrong choices over the past year, but she is now in a better position to right the wrongs of her government than at any point in her life. With this U.N report and the international recognition that comes with it, with the clear ICC determination to investigate Myanmar, and with Suu Kyi’s domestic popularity, she now has as much leverage as she will ever have to push against the entrenched power of the military leadership. And the path in front of her is also obvious.

First, she should offer the cooperation of Myanmar’s civilian government in the ICC’s expected investigation into the individuals named in the U.N. report as active perpetrators or enablers of the genocide. We will of course recognize the extremely delicate balancing act she would have to perform in this situation, but she is now once again forced to choose a side, and this time she must choose to be on the right side of history. Thankfully, this time she does have every incentive to do so. If Suu Kyi cares about the long-term transition toward democracy in her country, she can and should use the opportunity to full effect to impose the authority of the civilian government over the country’s military.

Second, she can start to make amends to the Rohingya, and redeem both herself and her country in the eyes of the international community. The path forward has already been set out in a U.N. Advisory Commission report, published last year under the direction of Kofi Annan. The Rohingya need to be given full citizenship, and they need to be able to enjoy the full freedoms and protections of the laws of the country, like every other citizen. U.N. agencies must have full access to the country to oversee any return and resettlement initiatives. And they must receive their property back, or at least adequate compensation and the chance at a secure future.

Suu Kyi’s political and moral standing has seen an unprecedented fall from grace in the past couple of years. But for her, this will be the moment of fate. This will be the moment when her entire legacy will be defined. It is now for her to grasp this opportunity with both hands, for her own sake, for the sake of her country and, not least, for the sake of the Rohingya people.

Azeem Ibrahim is a senior fellow at the Center for Global Policy and author of “The Rohingyas: Inside Myanmar’s Hidden Genocide.”