Islamabad is abuzz with chatter about the army and Inter-Services Intelligence chiefs’—General Qamar Javed Bajwa and Lieutenant General Faiz Hameed—listless visit to Saudi Arabia. A three-day stay in Riyadh did not result in an audience with Crown Prince Mohammed bin Salman. The duo had gone to placate Riyadh after Pakistan’s Foreign Minister Shah Mehmood Qureshi’s aggressive comments that had indicated an urge to part ways with Saudi Arabia. What is also at stake is a $6 billion Saudi credit line—approximately $3 billion provided to shore up Islamabad’s foreign currency reserves and another $3 billion in deferred oil payments. 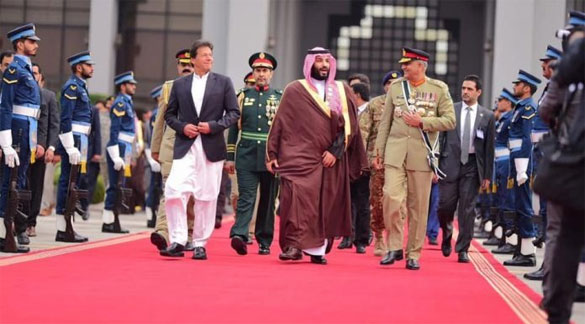 As the top two men of the Pakistani security establishment flew back, Islamabad responded with its own rap on Riyadh’s knuckles—not only did Qureshi save his job, but he also fervently advertised his departure to China to attend an important conference. The signal here being that as Saudi Arabia diversifies relations, Pakistan, too, will re-evaluate Riyadh’s strategic worth. Notwithstanding Pakistan’s earlier knee-jerk reaction of December 2019 when Prime Minister Imran Khan declined to attend a summit in Malaysia due to Saudi pressure, Islamabad has now re-assessed its own position.

The development of the past few weeks does not mean abandonment of Saudi Arabia and vice versa. Both Islamabad and Riyadh are heavily invested in each other. Pakistan’s armed forces play a critical role in securing the Saudi royalty and training of their armed forces. This is a role that was consciously sought and built upon since the mid-1960s. Traditionally, the Saudi royalty has preferred Pakistan’s military over the Egyptians or other Arab states. According to an assessment, there may be about 3,000-5,000 Pakistani troops presently deployed in the Kingdom. Besides, General Raheel Sharif, who heads a Saudi-lead counter-terrorism coalition, another retired military man, Maj. General Khawar Hanif works as adviser to the Saudi Ministry of Defense.

On its part, Saudi Arabia has consistently invested in Pakistan’s State and society. The bilateral State relations may not be at their best, but that does not minimise Saudi influence on Pakistan’s society. Maulana Tahir Ashrafi, a Deobandi cleric and chief of Pakistan’s Ulema Council, is an example of the Saudi outreach in Pakistan. Both States have a lot of capacity to both benefit and harm each other. Neither would want the linkage to turn acutely sour.

Pakistan’s reassessment of Saudi Arabia’s value or that of any other state revolves around its three broad foreign policy goals: (a) confronting India, (b) recognition as a significant regional player, and (c) seeking financial and other resources needed to run state infrastructure. Building a Muslim bloc that helps sustain these objectives has been part of its historical tactic. These three aims are both intertwined and at cross-purposes, resulting in interesting choices.

Saudi Arabia has been important for Pakistan as a source of socio-political legitimacy and as a financier. It is also one of the sources of oil procurement at affordable rates and terms. But that in itself is not sufficient to tie Pakistan to Saudi Arabia forever and at all costs.

One is reminded of Iran that was once Pakistan’s major financier. In fact, it was more significant than Riyadh in terms of security. Pakistan’s concept of strategic depth emanated from its relationship with Iran during the 1960s and 1970s. The Persian monarchy not only provided weapons to Pakistan during the 1965 war, but it also parked Pakistan International Airlines aircraft as protection against Indian bombing. Post-1965, Iran, as author Alex Vatanka states in his book Iran and Pakistan on Iran-Pakistan-US relations, became ‘an arms purchasing agent’ for Pakistan. The Shah of Iran considered Pakistan’s security as fundamental to its own and played a critical role in negotiating arms transfers from both the US and Israel.

Yet, in the late 1960s, a frustrated Shah of Iran sent his ambassador to Pakistan, General Hassan Pakravan, to then President General Ayub Khan with this message: “Why is it that Pakistan always turns to Iran when it has material needs but holds instead 100,000 man rallies for Nasser of Egypt?” General Khan, who was fascinated by Nasser, made an excuse that he was wowing Arab states to get additional support in the UN for Kashmir. However, the engagement with the Arabs versus Iran was more systemic and continued with Zulfiqar Ali Bhutto in the 1970s.

Starting from the mid-1960s, Pakistan was re-arranging its relations based on its strategic calculus. While it continued to get financial aid from Iran and help in fighting insurgency in Balochistan, a major diversification took place in which the Arab world gained greater significance. Although Pakistan was distracted by Iran’s engagement with India and being constantly told by the Shah to improve relations with New Delhi, there were other reasons as well.

Islamabad viewed Indira Gandhi’s engagement with Tehran in 1974 with suspicion. Though Iran was committed to Pakistan’s security, the former recognizsed that India had a greater role in South Asia. This was unacceptable to Bhutto, who more than Ayub, was invested in the idea of Pakistan leading a Muslim power bloc independent of Iran. Reportedly, he bad-mouthed the Shah privately to American President Richard Nixon and Secretary of State Henry Kissinger as a weak ruler, who was less capable of protecting American interests in the Middle East and South Asia as compared to Pakistan. The whispers reached the Shah, generating bad blood between him and Bhutto. Therefore, the Shah of Iran refused to personally attend the Islamic Summit Conference organised by Bhutto in 1974 in Lahore. Tehran was miffed with the Pakistani leader eulogising Saudi Arabia’s King Faisal during the Summit and drawing closer to Muammar al-Qaddafi of Libya.

During the 1960s and 1970s, the Arab world, especially Saudi Arabia and the Gulf states were almost devoid of any Indian influence. Despite an earlier engagement with Saudi Arabia, India seemed to have abandoned the idea of pursuing it. In 1951, the Saudi king gave Indian Prime Minister Jawaharlal Nehru, who visited the Kingdom, the title of ‘Rasool ul Islam’ (messenger of peace). But soon after, New Delhi not only withdrew from further engagement with the Kingdom, but as a British diplomat stated in his comments: “Nehru feared being encircled (politically) by Islamic states”. In 1958, New Delhi terminated the supply of Indian currency to the Gulf States and Saudi Arabia, citing inflation.

Pakistan not only filled the gap left by India, but also became a major source of security for the Saudi monarchy. For years, the bilateral relations depended on Rawalpindi than Islamabad. The bilateral cooperation during the 1980s against the Soviet troops in Afghanistan was a major glue. The exception was the Nawaz Sharif government. However, even Sharif could not take the risk of committing his government to Riyadh’s foreign policy goals vis-à-vis Yemen. The excessive military engagement also resulted in the inertia, due to which, Pakistan did not react to India’s re-engagement with Saudi Arabia that began in the late 1990s, grew during the 2000s and blossomed under the Narendra Modi government. Pakistan could not react as India with its growing economy became attractive for Saudi Arabia. There was always an over-dependence on military interaction. When the Saudi priorities changed further with a regime change in Riyadh, Pakistan fell back a little more.

It’s not just Riyadh that is shifting gears, Pakistan’s perception of Saudi Arabia also seems to be changing. There is lesser confidence in Riyadh’s ability to remain Pakistan’s cash-cow because of the former’s financial challenges emanating majorly from the oil crisis.

The policy of Arabisation means that Saudi Arabia is no longer a major destination for Pakistani labour. Politically, an MBS-led regime has numerous challenges to its security and lacks power to lead the Muslim world. The Crown Prince may look powerful but he has his vulnerabilities that could be exploited. The rivals that he has displaced from the domestic power equation and the Saudi deep state could aggravate matters for him.  The new Riyadh does not even appear to have the grit to take a decision on recognising Israel, without which, Pakistan cannot take a similar step. Not to mention Saudi Arabia’s growing political and financial investment in its relationship with India that is an issue. It is another matter that Islamabad has not even made a lukewarm effort to use the OIC mechanism to push the case for Kashmir or even marginally tried to wow a newly liberalising Saudi regime.

But at this juncture, inertia is not the cause of the changing bilateral relations. Pakistan seems to be driven more by the confidence of being part of a strategic grouping that it believes will dominate global politics in the coming years. The relationship with China, a possible inclusion of Iran and growth of the Belt and Road project do offer new challenges, but also holds promises for Pakistan, in view of which, there seems to be lesser tolerance for MBS’ mood swings. Not to forget that the design of the new Middle East policy is made in Rawalpindi, not Islamabad. Shah Mehmood Qureshi can be blamed for his style of delivering the message but not the message itself.

At the end of the day, it is not a breakup of a marriage but States re-arranging their priorities and choices. The pace at which the change happens matters. What ultimately comes out of it is a different story.

Original Headline: Pakistan’s Saudi marriage not over. But with China on its side, MBS mood swings won’t work