Arrogance Comes to The Tabligh Men from The Belief That They Are Doing God’s Work, And God Is Their Refuge

Tabligh men organised a congregation of 250,000 participants near Lahore in Pakistan on March 11, despite the request of the Pak authorities to postpone or cancel it. And they gifted the perils of Corona virus, and deaths to whole of the Muslim world from Gaza to Malaysia. They have orchestrated a similar affliction in India, and brought death and gore to many families across the country. 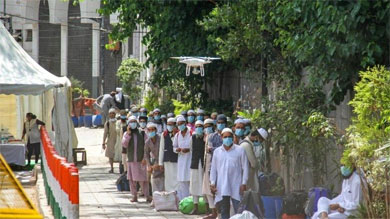 The arrogance comes to the Tabligh men from the belief that they are doing God’s work, and God is their refuge.  Care and caution, the advice of the medical practitioner, a directive of the government-- go to hell.

The situation reminds me of the Bible.  A tempest in the sea disturbed the balance of the ship in which Jesus’ followers were travelling. The men got scared, and rushed to Jesus Christ demanding safety. Jesus rebuked them and said, ‘Why are you fearful, O men of little faith.’ Then the sea was calm.

But in real life, things do not work if we merely believe. Storm in the sea require a life jacket or a rescue operation.

Black Death, the epidemic of bubonic plague in the 14th century,  wiped out almost half of the population of Europe. The disease was so contagious and deadly that ‘the mere touching of the clothes appeared to itself to communicate the malady to the toucher.’ A healthy person who went to bed at night could be found dead in the morning.

One of the reasons for massive deaths in the Middle Ages Europe was mass assembly of the people at the churches for prayers and repentance. From there, they carried the infection. Roman Catholic Church told people that the plague was God’s retribution for people’s sin and insubordination. Prayer at a church would propitiate the angry, unremitting God. But the result was the opposite. Plague continued to rage and destroyed more lives.

Today, in the age of Covid-19, the saving grace for us is science, medicine, and information. We know how the virus spreads, and how to fight it.

But Tabligh people are redoing the Catholic Church of medieval Europe. They believe that Corona virus is a curse of God let loose on the sinful humans to teach them a lesson; and a solution to this problem is religious rites, prayers, and visit to a mosque.  The punishment has descended from God on people for being too much with the world, and for absenting from the mosques/temples. The answer to this threat is not closing the gates of mosque/church, but opening them to allow people bow before the altar of God.

I heard one person say that because Muslims do not go to the mosques for offering five times obligatory prayers, upset God has shut the gates of his house for them.

The problem of Tabligh Jamaat is not only a lack of knowledge about the modern world and how it works, but also of religion, which it champions. The illiterate clerics feed the common Muslims that Corona virus is a conspiracy to damage the religious traditions of the Muslims. Mosques are ‘deserted’ because Muslims have no love for or fear of God, and they are mandated to ‘populate’ it.

Though many Muslims associate themselves in India with the activities of the Tablighis, which is a puritanical movement, and seeks to drag the Muslims 1400 years back, most of the Muslims are very critical of it, and oppose it tooth and nail. They call it ‘Taklifi Jamaat’, as, according to them, it maximises difficulties of its followers and of the Muslims. They see it as an enemy of the Muslims, since it persuades the Muslims to renounce the world, and take to prayers and propagation of the puritanical form of religion as a full-time activity. The Tablighis move in cities, towns, and villages, and stay in the mosques, and engage with the Muslims of the locality. They tell the young minds to distance themselves from the world, education, career, and wallow in the opium of religion.

Many Muslims believe the Tablighis indulge in what the worst enemy of the Muslims would dream to do. They emaciate the community, preaching them to shun academics, politics, business, and so on, as they are irrelevant in the eyes of God.

They tell the followers what the Bible says: See the birds in the air. They sow not, neither do they reap, nor gather into barns. Yet God feeds them. Are you not much better than them?

Inference of this is: there is no need to open your shop, earn money, plough field. Allah would take care of everything, even of the children they give birth to.

They inform the participants about what happens after death, in the grave, and thereafter, and how to prepare for that. This worldly life is too insignificant to bother about. Once one becomes Tablighi, nothing interests him, except religions and its precepts. Mostly, lower class Muslims, who see no hope of making good through mainstream channel, seek achievement and redemption through this route.

The irony is that when the grand mosque Kaba in Mecca is closed, Tablighis are ‘propagating’ correct form of Islam going door to door among the Muslims during a pandemic.

The touchstone of religion is belief, the strength of science is doubt. Science questions and doubts everything it arrives at. By this method, it evolved, discovered secrets of nature and gave humans solutions to problems like plague, measles, small-pox, etc. But, if you doubt a religious precept, or the Zeus himself, you are a friend of Satan. Older the percept, and the temple, the closer you are to God, and his mercy.

Yuval Harari, writer of the celebrated book ‘Sapiens: A Brief History of Humankind’,  says ‘When a thousand people believe some made-up story for a month--that is fake news. When a billion people believe it for a thousand years--that is a religion, and we are admonished not to call it fake news in order not to hurt the feelings of the faithful.’

Interestingly, most communities moved away with time. They threw religious directives, and scriptures out of their window. Muslims are the only community on the earth shouldering the burden of religion in its pure form, and not surprisingly, they are the most backward people on the earth.

Asif Ibrahim, IPS, is a former Director of the Intelligence Bureau.