I Am an Indian Muslim, I am Human too; You can Talk to Me 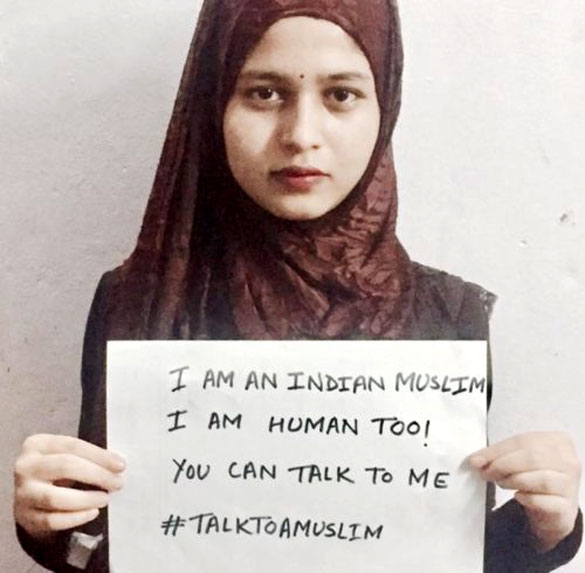 I tried talking to a Muslim called Anil a couple of months back. Not only did he not talk to me, he glowered and told me to go talk to myself if the urge to communicate with another Muslim was that acute.

When Anil isn’t making a livelihood selling tea out of a small hole-in-the-wall shop down the road from where I live, he’s just another Muslim offering his prayers whenever he can and shielding his identity as Anil, whenever practicable — I learned he was Muslim after several months, when I overheard snatches of his conversation with his folks over the telephone.

This is standard practice for most lower-middle-class Muslims typically employed in cities not their own. To strip off the cloak of a non-Muslim name and be confident, not vulnerable, is a luxury they cannot afford.

So how does one #TalkToAMuslim when said Muslim doesn’t — isn’t even allowed to — accept his own identity? One doesn’t. The hashtag presupposes that all Muslims are equally interested in starting conversations — or worse, becoming conversation starters. It robs a lot of Muslims of the agency to decide what discourse they want to enter into. Such invasive outreach methods will not, unfortunately, affect those of us on social media enjoying a certain social capital — the kind that enables us to create such hashtags to begin with. But it does affect those who don’t have the privilege of living relatively unapologetic, transparent lives. An Anil, caught under the blinding headlights of a non-Muslim name looking to suddenly “reach out and understand”, even as he grinds the wheels of his daily reality — which will keep turning the cycle as the world and trends pass him by — might even have to feign an insipid conversation. Unlike a lot of us, he can’t voice his opinion in a national newspaper or a visible platform, easily. He can’t afford to be rude in exercising his choice to not have his identity navigated through a liberal prism. Our class privileges warp our perspectives on what is empowering and, crucially, to whom.

The socio-political reality of our times sunders a convivial Iftaar evening from the grim narrative of everyday Muslim experience. That chasm is too vast for a hashtag to bridge. And an interfaith Iftaar makes for great optics but achieves little else. The Congress must know about the efficacy of the Iftaar. It started the trend, after all. Post Nehru, most Iftaars were seen as networking events to nurture Muslim voices that could serve some electoral purpose. When Nazia Erum (‘Why #TalkTo AMuslim’, IE, July 31) says “religiously marked ghettos are increasingly the reality of India. This is not an overnight phenomenon but a slow process of otherisation of Muslims adopted by the Congress and maximised by the BJP”, I hope she remembers that the same Congress has also been equally fond of Iftaars until recently.

Erum says that “Engagement is of the essence… Know thy neighbour” or “open a door” could be directed at absolutely anybody. It not just misses driving home the point of needing to understand the fears of your fellow Muslim brothers, but also trivialises their problems by generalising it.”

Open a Door, an initiative by Campaign for People’s Unity in Kolkata, connects tenants with property owners who — on record — say that they don’t support any form of such discrimination based on religion (hint: Muslim) or marital status of tenants. Launched in mid-June, it already has more than 2,500 members including a wide number of property owners offering their support to prospective Muslim tenants. Kasturi Basu, one of the organisers of the campaign, says that there are immediate plans to also set up a group that will facilitate difficult marriages under the Special Marriage Act, including inter-faith ones, with legal consultation. Know Your Neighbour is organised by Social Network for Assistance to People (SNAP), a non-profit based out of Kolkata. In 2016, SNAP had also released a comprehensive study on the state of West Bengal’s Muslims, with a foreword by Amartya Sen., which was well-received in academic circles. Their Know Your Neighbour project aims to familiarise people with Muslim neighbourhoods — ghettos — and dispel prejudice about them. Again, ChalChitra Abhiyaan in western UP, a media cooperative by documentary filmmaker Nakul Singh Sawhney, helps to document the stark lives of minorities — and the communal forces at play — through its films.

Not only do these initiatives, and many more I may not be aware of, understand the fears of minorities including Muslims, they work towards a concrete solution to counter that fear. It doesn’t trivialise the problem, unlike an inchoate hashtag that does the rounds of liberal circles before dying a digital death. It doesn’t offer optics but an organised system to fall back on. The necessity of this “new India” isn’t to recognise the importance of talking — that ship has sailed and sunk — but instead, to finally realise the futility and privilege that comes with just drawing-room talk.