His Name is Khan and He is a Hero 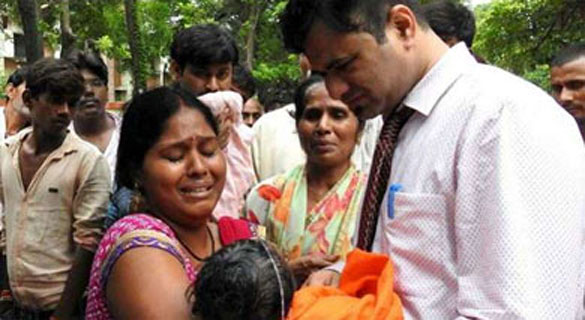 Kafeel Khan, who is an accused in the Baba Raghav Das (BRD) Medical College/Hospital tragedy case

In much of the civilized world, this would have been a scandal. Dr. Kafeel Khan, who saved dozens of lives during the Gorakhpur tragedy, is in jail for the last eight months. He is the same person who ran from pillar to post sourcing oxygen from different sources so that children at the Gorakhpur hospital did not die for lack of oxygen. There is enough proof to support his credentials: even the Para military Sashstra Seema Bal is on record that Dr. Kafeel requested them to help with trucks so that he could transport the oxygen cylinders to the hospital quickly. Children did die, despite his best efforts to save them. The nation watched in horror, as BJP ministers tried to rationalise the situation by arguing that such things should not be blown out of proportion. The ever alert PMO did not see it as a case fit enough to merit a tweet. The CM, five times Member of Parliament from the same constituency did not find time to mourn with parents who had lost their little ones. This criminal negligence should have been enough to earn citizen’s censure in any country. Indian sensitivities have become so immune that the horrific murder of children was treated as just any other unfortunate incident.

The government was new and had come on the promise of good days ahead. The system therefore had to invent a culprit. The tears didn’t even dry when the system started to bay for the blood of Dr. Kafeel. That unending night of the tragedy, Dr. Kafeel had earned goodwill and praise from all media outlets for his sympathy and action to save dying children. But then, his identity did not fit the discourse of right-wingers. How could a Muslim become a hero? After all, this was a government which had come to power on an anti-Muslim plank and to their horror of horrors; here was a Muslim who amidst the murderous apathy of the government was winning applause from different quarters. The trolls got active. His past was dug up and frivolous charges were imputed to him. Charges which ranged from being ridiculous to being outright lies.

Dr. Kafeel was accused of siphoning off oxygen from the hospital. Strange that liquid oxygen can be siphoned off so easily. We do not know how he managed to it. Neither is the system, who is holding him guilty is telling us how he managed to do so. On the other hand, there is documented proof that the supply of oxygen was running dangerously low for the past one week. It is also on record that the supplier had withheld any further supplies unless the hospital cleared the pending bills. If anyone, then it should have been the chief medical officer of the district who should have been held responsible for so many deaths. But then, if you get a Muslim as a scapegoat, then all rationality has to be applied only with the express intention to frame this person as the accused.

But then, if you cannot find fault in the professional behaviour of the person, then you rake up his past. Exactly the same happened to Dr. Kafeel. In 2015, he was accused of rape. The trolls went hyper. They had found the most convincing proof of his culpability. After all, how can someone who was accused of rape, become a hero for millions of people. But in their enthusiasm to decimate him morally, the right wing trolls conveniently forgot that the police had investigated the case and found that the charges against him were false and baseless and part of some conspiracy against him. But then, for those who articulate their political opinions based on the religious identity of the person, the accusation itself seems to the incontrovertible proof of guilt.

After eight long agonizing months inside jail, Dr. Kafeel has penned an open letter proclaiming his innocence. His bail has been repeatedly denied by the lower court and the High Court has not been hearing his bail plea on some pretext or the other. He rightly blames the DM of Gorakhpur and the higher officials of the health department in failing to see to it that regular payment was done to the supplier of oxygen to this hospital. Instead of them, he is languishing in prison for no fault of his. The law of the land, which many times has proclaimed that granting bail is the rule rather than the exception, has a different yardstick when the accused is a Muslim. It is not just Dr. Kafeel, but under the circumstances, his whole family is suffering because of his wrongful incarceration. Members of civil society must wake up to their plight and start a campaign so that justice is done to Dr. Kafeel at the earliest.