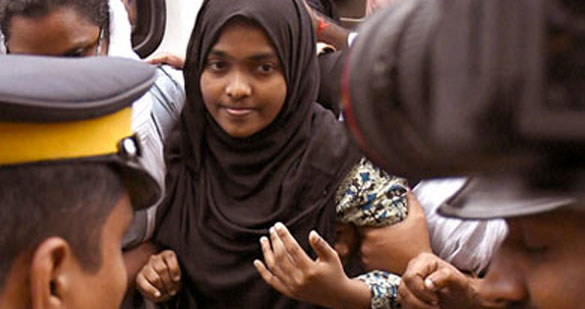 Hadiya, who is now known as Athira

The case of Hadiya, who is now known as Athira post her conversion to Islam, raises a number of issues. The first question of course is why such a private act, like converting to some other faith, has become a public spectacle? For the start, this has become an issue because it was made into one. The reports suggesting that it was the Hindu right wing which made it into an issue, first in Kerala and then in Uttar Pradesh is simplistic.

The phenomenon of inter-religious marriages has riled almost all communities at some time or the other. Actually, in the context of Kerala, it was the Christian groups, which were the first to raise the bogey of love jihad. They started arguing that it was an elaborate trap laid by Muslim men to entrap girls from Christian communities. They also argued that in the name of love, Muslim men have been given money to lure girls from other communities, they emotionally make the girl vulnerable to conversion and after marriage, with their mission accomplished, and they divorce them and start searching for another girl.

This is nothing but conversion through deceit and fraud which must be stopped. What also got eyeballs rolling was their claim that these Muslim men were part of an elaborate network which is full time engaged in luring Christian girls to Islam, and that their ultimate aim was to send these girls to ISIS territories or to become members of other such terrorist organization. The Hindu right wing picked up these same arguments and made it into a successful election issue in Uttar Pradesh. Post the BJP coming to power and NIA taking up the issue, the matter has become one of national debate where people are being forced to take sides, one way or the other.

The way the courts have treated the Hadiya case so far leaves much to be desired. If the courts start treating adults like Hadiya like a juvenile and start making observations that despite being adult, her testimony cannot be taken seriously, then there is a problem. It will make parents the sole guardian of even the adults and thus will clamp on issues like freedom and liberty of young adults. The choice that these adults make must be sacrosanct and should be protected by the courts as it has been done on countless occasions. But for some reason best unknown to them, the courts this time have gone with the prevailing conservative opinion rather than treating individual rights as something inviolable in law. If the courts were actually worried about the security implications of the love jihad issue, then they should have ordered a full inquiry. But in no case should they have detained Hadiya from residing in her husband’s house, which is her legal right.

Instances like Hadiya will keep repeating themselves. And no community is free from blame of putting restrictions on movement of girls, curbing their sexuality and denying their choice of love and marriage. Caste and religious groups have all been guilty of stultifying women because they think that women become ‘astray’ and bring shame to the community and family. The honour killings witnessed in many parts of the country, and those that go unreported emanate from the same problem: viewing women as commodities and as the repository of shame. So while honour resides among men, shame resides in women. Women have the potential to bring dis-honour to the family and community and hence they should be kept under a tight leash. Any transgression is punished swiftly. She can even be killed if she goes too far.

The Muslim community also has the same attitude towards women. But the Hadiya case is different. Here the women in question have converted to Islam and so the Urdu press and others are pointing out the Hindutva agenda of polarization by citing the Hadiya case. But what if the women in question were Muslim and would have decided to convert to Hinduism after marriage would the reaction of the Muslim community have been the same? One has grown up with narrations saying that converting one Hindu merits the same rewards as performing the Haj and then one is also told about the superiority of Islam over all other religions.

What impressions do Muslim children make about other religious traditions when they are taught such negative images about others? Is it not very natural for a Muslim man to believe that they belong to the best religion and therefore they are doing some kind of a service by asking people to convert to their religion? But this remains a problem which must be debated within the community. What makes us the best religious tradition? And why are we so sure about it? And why is it that we continue to believe in this nonsense despite all indications that we are perhaps the worst community to inhabit the world? Because we believe in such nonsense, we have made our laws also accordingly.

Thus a non-Muslim has to convert if he wishes to marry a Muslim. Exceptions exist for Christian and Jewish women marrying with Muslim men but the vice versa is not true. Thus till the time we are getting girls from other communities, it is alright.

Ostensibly, inter-religious marriages happen because the parties in question love each other. It is not arranged by families. But why does religion become such a big issue even in love marriages? After all, isn’t love supposed to be beyond the boundaries of caste and religion? In their insistence on converting girls before marriage, aren’t these Muslim men making the statement that even love can wait when it comes to matters of religion? As long as Muslims insist on converting others before marriage, questions will be raised by other communities about the intentionality behind such marriages.

Arshad Alam is a columnist with http://www.NewAgeIslam.com