The Ameer of the Jamaat-e-Islami, Pakistan, Munawar Hassan termed Taliban Terrorist Hakimullah Mehsud to be a brave martyr who went down fighting against the infidel forces: End of Jamaat-e-Islami?

It is evident that the death of Tehreek-e-Taliban Pakistan (TTP) Chief Hakimullah Mehsud has opened a Pandora’s Box of accusations, suspicions and conspiracy theories; and provided enough fodder to the electronic and print media to feast upon.

Although Pakistan Tehreek-e-Insaf (PTI) was fast to react, their statements were balanced and great caution was exercised by limiting their views to terming the attack as a conspiracy against the peace process. 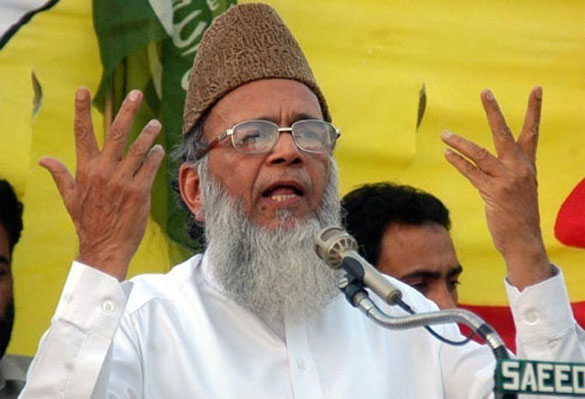 The Ameer of the Jamaat-e-Islami - Munawar Hassan - termed Hakimullah to be a brave martyr who went down fighting against the infidel forces. PHOTO: FILE

Maulana Fazl ur Rehman meanwhile went the extra mile to stir up anti-US sentiments by saying that “even a dog killed in a US drone strike would be declared a martyr”. Of course, Maulana’s statement invited the wrath of many from the religious circle who demanded an immediate apology from the chief of Jamiat Ulema-e-Islam Fazl (JUI-F).

The JI chief had reportedly said that if an American who died on the battlefield was not a martyr, then his backers were also not martyrs because they were chasing the same goal.

It is not a surprise that the Inter-Services Public Relations (ISPR) has condemned the JI chief’s statement as derogatory towards the martyrs who laid down their lives fighting with the militants, and demanded an apology from him.

Confused politics and disturbing statements have been the hallmark of the Jamaat-e-Islami leadership for the last couple of decades. Moreover, the Jamaat’s violent history and their alliance with militants and Jihadi groups are known to all and well documented.

Back in the day, it was commonly stated that the Jamaat-e-Islami introduced fire arms in Karachi University by establishing the ‘Thunder Squad’ – a heavily armed militant wing of its student body Islami Jamiat Taleba.

Of course, their agenda back then was the implementation of Sharia by using any measures necessary. There were even instances in which students of IJT baton-charged and ransacked any social gathering within the campus where music was played. Just recently, students of the Institute of Business Administration (IBA) university campus were beaten up by IJT students for playing music in one of their student body events.

In the last decade, a number of high profile Al Qaeda members were caught from the homes of prominent JI local leaders including the famous Waheed brothers. They were active members of Jamaat-e-Islami and they confessed to having links with the Al Qaeda.

With such a dodgy history and the recent statements in favour of the Taliban to the extent of demoralising the Pakistan army, Jamaat-e-Islami has yet again validated the reason for its fast waning popularity in the political spectrum of Pakistan. Their right-winged politics had lost them their turf in Karachi earlier, and they experienced the same result in Lahore and Peshawar after the 2013 elections.

They have been seen brokering alliances with like-minded groups in order to survive and make their presence felt. With the recent statements issued by the ISPR, it looks like the days are numbered for the Ameer of Jamaat-e-Islami, and we might even see a change in the party’s leadership.

It would be safe to say the JI chief’s latest statements have completely backfired and alienated the party’s few remaining conservative, right-leaning supporters, who could never swallow criticism of the Pakistan Army. The damage has already been done and JI will have to come clean in order to save itself from complete isolation.

Who knows, JI might even face a ban on its activities, similar to the de-registration carried out on its sister concern in Bangladesh.