Over the past few months, Israel has experienced a flurry of peace it hasn’t experienced in the previous 25 years. The Abraham Accords have normalized relations with Arab countries that few, if any, expected to see in our lifetime. 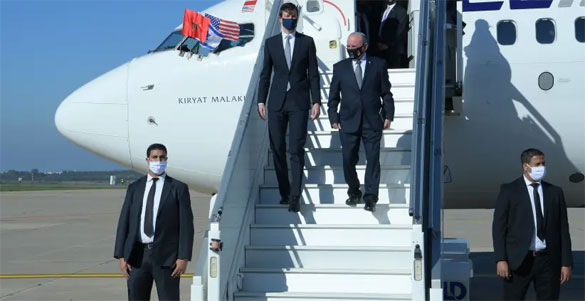 Of all the four Islamic state normalization agreements, Israel’s most recent agreement forged with Morocco stands out for its potential for long-term strategic advantage. If properly nurtured, a Morocco alliance could represent the end of Israel’s search for a state to serve as a bridge to the Muslim world.

Peace with the Muslim world has always been a strategic imperative for the Jewish state. And one key element in Israel’s pursual of that broad peace was the idea of creating a “bridge” between itself and these strategically distant nations. But the last time Israel sought, and briefly found, a bridge of that sort, things did not end well.

In the early 1990s, Israel began nurturing its relationship with Turkey. Given Turkey’s status as the most famous of the world’s nation-bridges, bringing together Europe and the Mideast, this was perhaps appropriate. For Israel, however, that bridge crumbled with the rise of Erdogan, an Islamist-nationalist strongman who had no appetite for peacemaking with a country he has called a cancer.

Still, the Turkey experiment held a unique potential. That Islamic nation striving for a better position in the global economy and greater domestic stability found in Israel a willing partner, who, in return, desired a reliable security and diplomatic partner to keep the regional peace.

Because of this, understanding the factors that transformed a stable and vital relationship between Jerusalem and Ankara into one of hostility is critical if Israel’s diplomats do not wish to see the Turkish debacle repeated. Three elements that contributed to the decline of the Turkish-Israeli relationship bear close attention. They are absent in Morocco but bear scrutiny.

The first is proximity. The Middle East is a cauldron of geopolitical activity that draws in any nation who desires hegemonic power and influence. Ironically, one of the greatest factors contributing to a Moroccan-Israeli alliance is that Morocco is not actually situated in the Middle East (as Arabia and the Levant) but is the westernmost nation of the coast of North Africa.

Future Moroccan-Israeli relations, due in large part to Morocco’s outsider status, will not be as susceptible to the game-of-thrones nature of Middle Eastern politics. The lesson here is that geography matters. The bridge needs to come from outside, not within the Middle East that can critically safeguard this alliance from the passions that co-opted Israeli-Turkey relations.

The second element is history. Turkey’s Ottoman past of domination shapes its aspirations today. Morocco has no such pretentions to empire and so is far less susceptible to an Arabist populist foreign policy that would likely disfavor relations with Israel. Morocco, like Turkey, shares an international frontier with the West in the form of its border with Spain, reinforcing its moderate orientation towards Western nations. Unlike Turkey, it does not maintain territorial grievances with its Western neighbors, the likes of which served to stoke Turkish nationalism into anti-West hostility.

But we also can’t ignore the Moroccan-American Treaty of Friendship (1777), which is the oldest unbroken friendship treaty in US history. (It’s often glossed over that Moroccan soldiers served in the French army in both the First and Second World Wars.) Morocco has a melting-pot culture, boasts the world’s fourth largest Arab population and yet its history bears a rich ethnic makeup, having hosted Carthaginians, Phoenicians and Jews from the east.

THE LESSON for Israel is that history cannot be photoshopped for political convenience. Turkey’s backsliding to an Ottoman-styled politics, is no accident. Past is prologue, whether it was glossing over the Cyprus occupation, or ignoring the Armenian genocide, we see now the writing was already on the wall. An established history for tolerance and pluralism is a cultural commodity precious to a Jewish State subjected to national prejudice and ethnic demonization.

The third element is institutional politics. In the topsy-turvy nature of the Middle East, the deeper the roots the less vulnerable they are to the scorched-earth passions that too often flare up in the region. Turkey once seemed so attractive on account of the trappings of a modern democratic state which it inherited after World War I. Yet the Kemalist revolution has faded as Erdogan’s autocracy is sanctioned by his altering – virtually at whim – the Turkish constitution.

Though Morocco is a constitutional monarchy, it has enjoyed a stable political order that has weathered the test of time. Where Turkey’s democracy is regressing, Morocco’s government is gradually liberalizing. And there exists an effective political opposition, making Morocco the first Arab country to have an opposition party assuming power from an elective process.

To put it clearly, Morocco may not have the sort of allure the Kemalist upheaval on the Bosporus attracts as a bridge-builder between East and West. Israel must swallow the lesson. Nevertheless, Morocco has the time-stamped credentials to make the argument that it is one of the very few moderate and stable Muslim states in the world.

Israel finds in Morocco a stable, democratizing, and liberalizing Arab Muslim nation, a state that enjoys free-trade agreements with the US and the EU and an economy based on free-trade principles. Israel, for its part, offers many carrots for a Morocco looking to embrace the 21st century. For one, Israel generates greater national prestige on the world stage by making it a power broker in the region; further, by passing the Israel litmus test, Morocco will exponentially bolster its status as a moderate in a region bereft of such titles.

The only true hindrance is not the résumés of these two nations but the imagination of both countries political elites to seize the moment the Abraham Accords provides. As the first Israel-US delegation touches down in Rabat this week, upgrading diplomacy with Morocco must be accomplished carefully where public relations, cultural exchanges and diplomatic pageantry becomes just as important, if not more, than the papers signed between the two. Yet, we cannot ignore the pitfall of the past as we confront – for the first time in a generation – a serious opportunity for Israel to begin building an enduring strategic alliance with a Muslim state.