What I Found in The Madrasa, Is Difficult to Translate and Compress Into A Few Words

I hadn’t gone out looking for a madrasa. I had gone looking for the dreams and self-concept of Muslim women and girls. As it happened, I found a group of women activists and philanthropists, and among them, a gentleman who had come looking for donations for foundlings and orphans. He also ran a madrasa for girls and, on impulse, I asked permission to come and interview them. 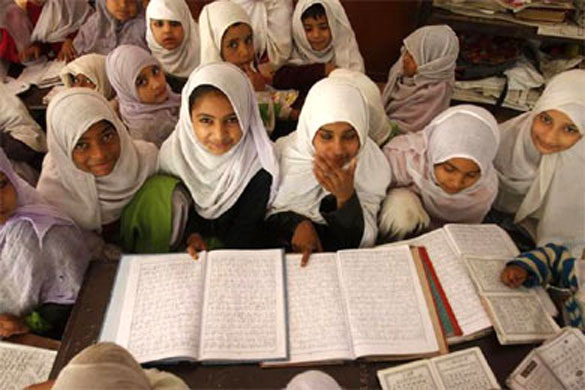 Pupils at a madrasa in Bhopal   | Photo Credit: A.M. Faruqui

I had never stepped into a madrasa before and had certain preconceived notions about what happens there. My ideas about madrasas were of little boys sitting cross-legged in rows, white-capped, and learning almost always by rote. I lacked the imagination to go beyond, and assumed I’d find a little girl version of the same image.

What I found is difficult to translate and compress into a few words. The little girls filed into a room downstairs, ushered in and watched over by their teachers and seniors. They sat in chairs, on a takht, wherever there was room. Uncertain, diffident, probably wondering what I wanted.

Starting with the older students, I asked each one to tell me her name, a line or two about herself, where she’d come from, what she studied, and what she hoped to be when she grew up. And name by name, the stereotype crumbled.

All the girls were resident students and many had lived there for years. Many had already spent more of their short lives here than they had with their parents in their villages. The majority had come from villages and Qasbas in Uttar Pradesh but some were from Bihar, and one child (perhaps six or seven years old; she wasn’t too sure) had come from as far away as Nepal.

To say that they had come to study and live there is obviously not accurate. Children never get to choose. Whether they are sent to posh boarding schools with horses to ride and swimming pools, or an orphanage, or a madrasa where they are guaranteed precious little except simple meals and a roof over their heads — adults decide. When I asked the girls what their parents did for a living, it also became amply clear that the adults also had very little choice. Most of them worked in the informal economy, in jobs that don’t pay much.

Some of the girls had gone to a village government school for a couple of years before being sent away to the madrasa. A lot of the older girls were reticent about discussing the circumstances that kept them here. The little ones probably didn’t know how to describe those circumstances. Many had older sisters or cousins also living here.

It was soon evident that the girls were here because it was seen as a relatively safe, respectable space for them to live in and gather what education they could. There was no real fee — perhaps families who could afford it gave something, but lessons and meals were obviously funded through community philanthropy.

They were taught language, mathematics and geography along with readings of the Quran. A few of the girls said Urdu literature was their favourite subject, others maths.

When I asked what they wanted to be when they grew up, all of them had an answer and it wasn’t ‘housewife’. Most girls said Alima, which is Urdu for a learned woman or teacher. A couple of them dared to whisper ‘doctor’. Later, it struck me that so many said they wanted to be an Alima because the only working women they had seen growing up were teachers. Many of their seniors had studied in the same institution and stayed on to teach.

I walked away that afternoon with a heavy heart. When I looked around the building, I saw an open terrace where laundry was drying, and large rooms shared by several girls. This was not very different from the hostel I lived in as an undergraduate. It was just much poorer.

In college, I lived in a hostel administered by nuns. It was very strict. We were not allowed to step out without written permission nor receive visitors other than families. Meal timings were strict, as were bath times. The very taps were locked up and warm water rationed in winter. We were well fed, of course. Each of us had a bed to herself but we certainly didn’t have six feet of space between beds.

The madrasa was one tenth the size of the hostel I lived in, perhaps smaller. It didn’t have a vast campus attached or the real estate to allow sports. It certainly didn’t have the money for lessons in art. It probably didn’t serve pastries on Sunday afternoons.

I think of those little girls now, during this harsh lockdown. If, instead of four hours, the Prime Minister had given them four days’ notice, they still wouldn’t have been able to go home. Even four weeks may not have been enough. They didn’t have mobile phones. They didn’t have money. They didn’t have transport. Their parents had no money to fetch them in a hurry. Their teachers could not afford to drop them home. I doubt the state could have made arrangements for their safe conduct home, with food and trusted escorts.

How can a madrasa make alternative arrangements for physical distancing in the midst of a lockdown? What are they expected to do? Magically transform a building to 20 times its size? Procure dozens of new beds and bedding overnight? Conjure a sprawling dining hall out of thin air?

Our right to demand adherence to rules framed by the state in a health crisis must be tempered by our willingness to accept that we have failed to take collective responsibility for each individual child, each school, each worker. Just as millions of migrants were left stranded in metropolises with no wages and no transport, tens of thousands of poor Muslim children have been left stranded in the limited spaces their circumstances have given them. It is not for us to ask how big these spaces are. It is for us to ask how we can enable those spaces to expand, in both a physical and a social and intellectual way.

Original Headline: How can a poor madrasa magically conjure up many more rooms in the midst of a lockdown