Ali Awad, 14, was chopping vegetables when the first bomb struck. Adel Tormous, who would die tackling the second bomber, was sitting at a nearby coffee stand. Khodr Alaa Deen, a registered nurse, was on his way to work his night shift at the teaching hospital of the American University at Beirut, in Lebanon.

All three lost their lives in a double suicide attack in Beirut on Thursday, along with 40 others, and much like the scores who died a day later in Paris, they were killed at random, in a bustling urban area, while going about their normal evening business. 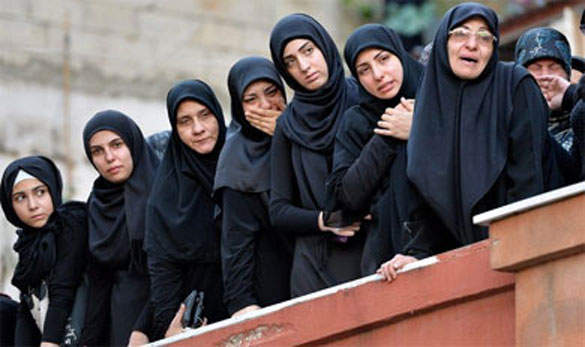 The relatives of one of the victims of the twin suicide attacks in Beirut mourned during a funeral procession in the city's Burj al-Barajneh neighborhood. Credit Wael Hamzeh/European Pressphoto Agency

Around the crime scenes in south Beirut and central Paris alike, a sense of shock and sadness lingered into the weekend, with cafes and markets quieter than usual. The consecutive rampages, both claimed by the Islamic State, inspired feelings of shared, even global vulnerability — especially in Lebanon, where many expressed shock that such chaos had reached France, a country they regarded as far safer than their own.

But for some in Beirut, that solidarity was mixed with anguish over the fact that just one of the stricken cities — Paris — received a global outpouring of sympathy akin to the one lavished on the United States after the 9/11 attacks.

Monuments around the world lit up in the colors of the French flag; presidential speeches touted the need to defend “shared values;” Facebook offered users a one-click option to overlay their profile pictures with the French tricolor, a service not offered for the Lebanese flag. On Friday the social media giant even activated Safety Check, a feature usually reserved for natural disasters that lets people alert loved ones that they are unhurt; they had not activated it the day before for Beirut.

“When my people died, no country bothered to light up its landmarks in the colors of their flag,” Elie Fares, a Lebanese doctor, wrote on his blog. “When my people died, they did not send the world into mourning. Their death was but an irrelevant fleck along the international news cycle, something that happens in those parts of the world.”

The implication, numerous Lebanese commentators complained, was that Arab lives mattered less. Either that, or that their country — relatively calm despite the war next door — was perceived as a place where carnage is the norm, an undifferentiated corner of a basket-case region.

In fact, while Beirut was once synonymous with violence, when it went through a grinding civil war a generation ago, this was the deadliest suicide bombing to hit the city since that conflict ended in 1990. Lebanon has weathered waves of political assassinations, street skirmishes and wars; Israeli airstrikes leveled whole apartment blocks in 2006. But it had been a year of relative calm.

The Islamic State emerged from a group of militants in Iraq to take over large portions of Iraq and Syria, and now threatens other countries in Europe and elsewhere.

The disparity in reactions highlighted a sense in the region of being left alone to bear the brunt of Syria’s deadly four-year war, which has sent more than four million refugees fleeing, mostly to neighboring countries like Lebanon. For the Lebanese, the government has been little help, plagued as it is with gridlock and corruption that have engendered electricity and water shortages and, most recently, a collapse of garbage collection. Many in the region — both supporters and opponents of the Syrian government — say they have long warned the international powers that, if left unaddressed, the conflict would eventually spill into the West.

To be sure, the attacks meant different things in Paris and Beirut. Paris saw it as a bolt from the blue, the worst attack in the city in decades, while to Beirut the bombing was the fulfillment of a never entirely absent fear that another outbreak of violence may come.

Lebanon seemed to have recovered over the past year and a half from a series of bombings claimed by Sunni militant groups as revenge for the intervention by Hezbollah, the Lebanon-based Shiite militia, in the Syrian civil war to provide critical support for the Syrian government.

Some blamed news coverage for the perception that Beirut is still an active war zone. They cited headlines — including, briefly, a Times one that was soon changed to be more precise — that refer to the predominantly Shiite neighborhood where the bombing took place as a “stronghold” of the militia and political party Hezbollah.

That is hard to dispute in the political sense — Hezbollah controls security in the neighborhood and is highly popular there, along with the allied Amal party. But the phrase also risks portraying a busy civilian, residential and commercial district as a justifiable military target.

Meanwhile, Syrians fretted that the brunt of reaction to both attacks would fall on them. There are a million Syrians in Lebanon, a country of four million; some have become desperate enough to contemplate joining the accelerating flow of those taking smugglers’ boats to Europe.

But now, the attacks could rally political pressure in Europe to stop admitting them. When evidence emerged that at least one of the Paris attackers may have posed as an asylum seeker to reach Europe, some opponents of the migration quickly used that to argue for closing the doors.

That drew sharp reactions from Syrians, who said refugees were fleeing to Europe precisely to escape indiscriminate violence.

“This is the sort of terrorism that Syrian refugees have been fleeing by the millions,” declared Faisal Alazem, a spokesman for the Syrian Canadian Council.

At least a dozen countries have had attacks since the Islamic State, or ISIS, began to pursue a global strategy in the summer of 2014.

The compassion gap is even more evident when it comes to the situation in Syria itself, where death tolls comparable to the 129 so far in the Paris attacks are far from rare and, during the worst periods, were virtually daily occurrences.

“Imagine if what happened in Paris last night would happen there on a daily basis for five years,” said Nour Kabbach, who fled the heavy bombardment of her home city of Aleppo, Syria, several years ago and now works in humanitarian aid in Beirut.

“Now imagine all that happening without global sympathy for innocent lost lives, with no special media updates by the minute, and without the support of every world leader condemning the violence,” she wrote on Facebook. Finally, she said, ask yourself what it would be like to have to explain to your child why an attack in “another pretty city like yours” got worldwide attention and your own did not.

Back in southern Beirut over the weekend, as the government announced the arrest of seven Syrians and two Lebanese in connection with the attack, the street where the bombings took place was strewn with lettuce and parsley from pushcarts overturned in the blast. Men washed blood from sidewalks. A shop’s inventory of shoes — from small children’s slippers to women’s clogs — was scattered across the pavement. Several funeral processions were massing, ready to march to cemeteries.

Residents mourned Ali Awad, 14, passing around his picture in a scouting uniform. He had run out to see what had happened after the first blast, and was caught in the second, relatives said.

Nearby, Abdullah Jawad stood staring glumly into a shop. His friend, the owner, had died there, just after Mr. Jawad had painted the place.

“The government can’t protect us,” he said. “They can’t even pick up the trash from the streets.”

As for Facebook, it declared that the high level of social media activity around the Paris attacks had inspired the company to activate Safety Check for the first time for an emergency other than a natural disaster, and that a policy of when to do so was still developing.

“There has to be a first time for trying something new, even in complex and sensitive times, and for us that was Paris,” wrote Alex Schultz, the company’s vice president for growth, adding that Safety Check is less useful in continuing wars and epidemics because, without a clear end point, “it’s impossible to know when someone is truly ‘safe.’”