There are 1-3 million Uyghurs (also known as Uighurs) and other Turkic Muslims currently detained in “re-education” camps in China, and the world is finally waking up to what should minimally be described as ethnic cleansing, and what actually meets the United Nations definition of genocide.

Recent progress of the United States Uyghur Human Rights Policy Act of 2019 (UHRPA), passed unanimously in the Senate in September, and passed in the House 407-1 on Dec. 3 as the Uighur Act, is encouraging.

But Senate Majority Leader Mitch McConnell and Senate Minority Leader Chuck Schumer will have to act quickly to keep the bill from a long committee reconciliation process that, given recesses, a potential Senate trial following House impeachment, and the upcoming election, could push its passage through the two houses of Congress into February 2021.

Nury Turkel, chairman of the Uyghur Human Rights Project (UHRP) and Washington D.C. based lawyer, has worked on the proposed legislation since 2004 according to Omer Kanat, Executive Director of the UHRP. Turkel celebrated passage of the House version of the bill in a public post on Facebook. “Truly a historic day indeed,” he wrote. “What a milestone after many years of diligent efforts and legislative advocacy!”

The act is popular among Uyghurs and other East Turkistanis. Salih Hudayar, founder of the East Turkistan National Awakening Movement in Washington, D.C., has led weekly protests in support of the act since June 2018.

“I was very happy that [the] bill passed the House. It was a symbolic victory against China which I viewed as a signal from the United States that Uyghurs and other Turkic people of East Turkistan will not be forgotten and that there is hope for our liberation in the future,” he said. 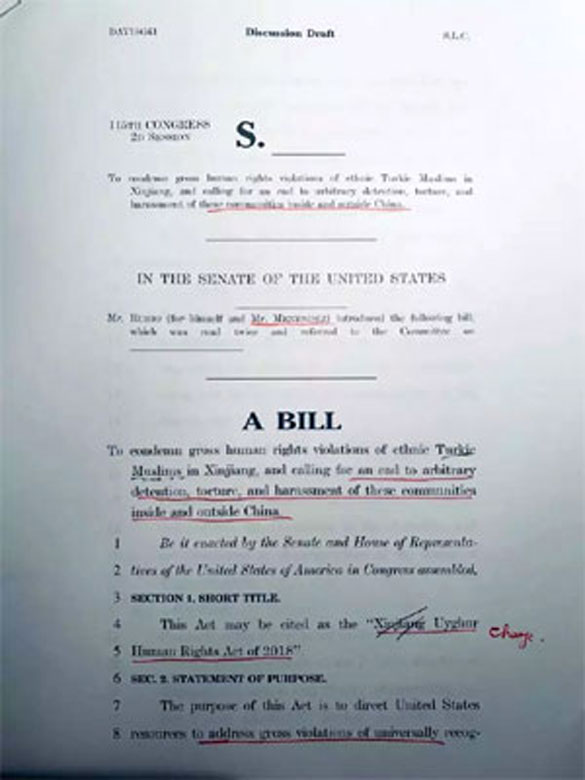 Chinese Communist soldiers occupied East Turkistan in 1949 when they beat the Chinese Nationalists. In 1955, they changed the name from Xinjiang Province to the Xinjiang Uyghur Autonomous Region (XUAR). Xinjiang means “New frontier.” Turkic Muslims native to East Turkistan, however, can have a strong reaction against the word “Xinjiang”. They prefer to call their homeland “Occupied East Turkistan,” or more simply, “East Turkistan.”

The population of East Turkistan is currently majority Turkic Muslim in the south, including Uyghurs and Kazakhs, and after extensive migration (East Turkistan activists would call it colonization) majority Han Chinese in the north.

The “Uyghur Policy Act is not only about Uyghurs it is about ethnic Turkic Muslims in the region,” said Rukiye Turdush, former president of the Uyghur Canadian Society. “And I like this part very much, because it includes every other ethnicity in East Turkistan that [is] occupied by China.”

Turdush has joined thousands of Uyghurs around the world who became active to protect loved ones detained in re-education camps. She demonstrated in front of the United States Consulate in Toronto and prepared a “request letter under the name of the Uyghur community in Canada” for delivery to the consulate. Like thousands of Uyghurs and other Turkic Muslims with loved ones detained in East Turkistan, she is highly active on Twitter, retweeting their stories and promoting online petitions.

Turdush has many sad stories of her own. She says that 37 of her uncles and cousins were arrested, and one of them was killed in March 2019. She does not know whether the rest are alive or not.

“I should fight against … China using my every capacity no matter how limited it is,” she writes. “It is not only because of my relatives it is because I am living in [a] free world and it is my obligation to fight for others who are not free.”

Many Uyghurs do not talk about their detained and killed relatives, she wrote to me. “People [are] afraid. They think China will take revenge and kill their relatives if they … talk about them.”

Front page of the draft the “Uyghur Xinjiang Human Rights Policy Act of 2018″. The markup is in Nury Turkel’s hand, and requests removal of the term “Xinjiang” from the title. This request was acted upon, and the bill redrafted as the “Uyghur Human Rights Policy Act of 2018,” introduced by Senator Marco Rubio in November 2018. (Photo from Anders Corr)

Turkel pointed out in his post that there is a long way to go before the bill becomes law. “Don’t be discouraged, but it will be an uphill battle in the Senate that some senators may object to one specific provision of today’s approved version of the bill — the export control provision — that had been added to the earlier version passed in the Senate.”

The export control restrictions in the House version of the bill prohibit export to China (including special administrative regions like Hong Kong), of “any machine learning, pattern recognition, artificial intelligence, quantum computing, or biometric technology” that would “facilitate the mass arbitrary detention of Turkic Muslims in the People’s Republic of China on the basis of associations or conduct which would not constitute offenses under United States law.”

The new House language in the bill relates to two Senate committees: those on foreign relations and banking. Informal negotiation would yield quickest passage, with a formal mark-up of the House-amended bill in the Senate committees taking much longer. Next, the Senate would most quickly pass the bill by running the hotline process through unanimous consent.

But if even a single Senator blocks the hotline, the Senate can only pass the bill by either: 1) bringing it to the Senate floor; or 2) negotiating a version of the bill that is pre-approved by all relevant stakeholders in both the Senate and House and adding it to the National Defense Authorization Act (NDAA) or some other legislation. Attaching it to a legislative vehicle is risky, however, as the NDAA is also bogged down by policy disputes. The easiest and surest passage is for the Senate to hotline an identical bill to the House’s Uighur Act. Then it goes directly to the president for signature.

While all Uyghurs with whom I spoke support quick Senate passage of the Uighur Act as strengthened by the House, Hudayar was disappointed that it did not go further. This is understandable given the large number of his extended family members detained by Chinese authorities: 86 males and 15 females, according to his own count. Hudayar heard that two of his male relatives were killed in detention, and two others died under suspicious circumstances after their release.

“I had been pushing for a bill similar to the Tibetan Policy Act of 2002 which would recognize East Turkistan as an occupied country along with recognizing the East Turkistan government-in-exile as the legitimate representatives of the East Turkistani people,” he wrote. “I see the Uighur Act [as] a precursor to … stronger bills in the future.”

Turdush said that she wishes the law sanctioned all Chinese Communist Party (CCP) members, rather than just Xinjiang’s “senior regional officials … responsible for facilitating the mass arbitrary detention of Turkic Muslims,” as written in the bill.

“I don’t think calling sanction for Chen Quanguo is useful,” she wrote. “Because, this is not only about him. This is like everybody point their finger at Hitler after … World War II. But we all know it [is] not only about Hitler.”

Given the current political situation, in which many U.S. politicians depend on campaign contributions from corporations that have financial links to China, the bill may not pass if it too directly targeted the CCP and its conception of territorial integrity.

McConnell himself has received millions of dollars in gifts and campaign contributions from the Chao family, into which he married, and which has business in China. He is now one of the richest members of the Senate. In 2008, McConnell and his wife, Transportation Secretary Elaine Chao, received a gift from her father worth between $5-$25 million.

Even those Senators without financial links to China, including campaign donors who do extensive business in China, will want to rein in rapidly increasing tensions. This explains the weakness of the bill compared to the Tibet Act of 2002, when United States policy elites nurtured ideas of a hegemonic Pax Americana.

Today Americans are disabused of any notion of omnipotence, and the Uighur Act is the bill we have. Not passing it would be a disaster for Uyghur morale, global human rights norms and U.S. national security. Therefore, a priority for all the national security experts with whom I spoke recently is to get this bill passed immediately.

There is still some political jockeying in the Senate and House over the bill, with both nominal and substantive changes introduced by the House. But those should be overcome, and the House version passed quickly by the Senate. This may require some to swallow their pride, but in addition to national security, the 1-3 million Uyghurs in detention merit prioritized relief.

“I urge senators to put aside political differences and overcome procedural hurdles to pass this bill and send it to [the] president’s desk for enactment,” Turkel wrote to me. “It’s a moral issue and swift action in the Senate is the right thing to do.”

The importance of the bill cannot be overstated, as it addresses an almost unimaginable level of human rights abuse against a minority population under the control of the world’s most powerful political party, the Chinese Communist Party. If allowed to act with impunity against human rights in such an egregious manner, China will continue to erode observation of the democratic values found in the 1948 United Nations Universal Declaration of Human Rights.

These are the values upon which the United States led the structuring of the post-World War II international system. That structure, including sovereignty and territorial integrity of every state, is integral to United States national interests, as it is to every nation in the system. But each part of that structure is mutually dependent.

The founders of the United Nations only agreed to territorial integrity, in the context of an understanding that human rights within those territories would be respected. Sovereignty should not be seen by China, or any country, as license to treat its citizens as sub-human. There are limits to sovereignty, and those limits are found in the 1948 Declaration.

What China is doing in East Turkistan is shocking to the conscience of most people in the United States, Europe, and other democratic nations. Such a shock, along with increasing realization of China’s aggressive economic policies, are leading to rapid deterioration of economic and diplomatic relations between the world’s only two superpowers, which is the foundation of peace globally.

This is why a bill on human rights in China is integrally linked to United States national security. As Turkel wrote to me: “Swiftly acting on this bill isn’t only the right thing to do, but it’s also in the U.S. interest, including to prevent mass atrocities and cultural genocide.” Opposing crimes against humanity is foundational to the modern identity, and therefore the national security, of the United States. The Uighur Act is a shining example of how the United States protects human rights around the world. It should be passed immediately.

Anders Corr holds a Ph.D. in government from Harvard University and has worked for U.S. military intelligence as a civilian, including on China and Central Asia.