Gaza and the Great Wall of Silence

President Mahmoud Ahmadinejad of Iran had horrified and outraged Western powers and public opinion when he repeatedly prophesied that Israel would be wiped off the world map in not too distant a future.  In fact, throughout his two terms in office, Ahmadinejad did little else other than obsess over Israel, the apparent myth of Holocaust and of course Iran’s nuclear program.

All this played rather nicely into the hands of Israel and its powerful friends in high places in Western hemisphere.  Even people like us who have little love lost for Israel and feel the pain of perpetual Palestinian persecution found the Iran leader’s fantasizing about Israel totally rather absurd. 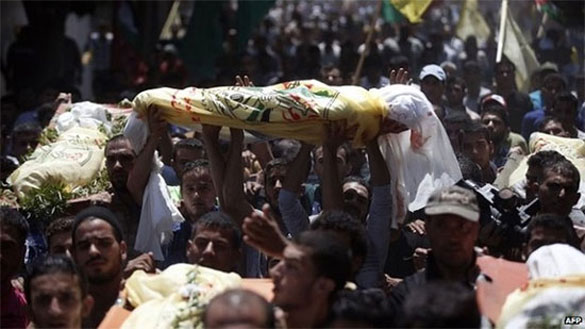 DYING YOUNG, YET AGAIN…Palestinians mourn the young victims of Israeli air strike on a home in Khan Younis, Gaza. AFP

Watching Israel’s reign of terror return to Gaza once again with full vindictive force over the past few days though, targeting a helpless, defenceless civilian population for the zillionth time while the world stands and stares, one tends to join people like Ahmadinejad in their wishful thinking.

What do you expect? What is the recourse for the oppressed but wish and pray for the end of this evil and murderous regime when the rest of the world, instead of coming to the rescue of the victims, watches in indifference, or worse, cheers for their tormentor?

Just when you think Israel cannot descend any lower, it surprises you with ever new depths of depravity. If anyone ever needed any more evidence about the absolutely evil, sick and homicidal nature of this regime, they got it all over again this week.

And if anyone still nurtured innocent hopes of peace and Israel’s commitment to the peace process, dialogue, two-state solution and all that balderdash, it has once again showed them what it thinks of all this idle talk.

It’s déjà vu in Gaza.  The same, sickening morbid drama is being played all over again with familiar tales of casual savagery and brutality by a country that claims to be the ‘only civilized democracy in the Middle East.’   And the world with all its awesome, fine institutions watches from the sidelines. As it always has.

For the mysterious death of three Israelis, two of them military reservists, Israel has already killed nearly 200 Palestinians and imprisoned hundreds besides destroying swathes of the painstakingly rebuilt Gaza.  And this craven war on a besieged population by one of the world’s most advanced military powers has just begun.

The utterly lopsided, unequal nature of this conflict takes one’s breath away.  In the words of Susan Abulhawa, the Palestinian American author and activist, “Palestinian children are assaulted or murdered every day and barely do their lives register in western press. No mother should have to endure the murder of her child. No mother or father. That does not only apply to Jewish parents.

“The lives of our children are no less precious and their loss are no less shattering and spiritually unhinging. But there is a terrible disparity in the value of life here in the eyes of the state and the world, where Palestinian life is cheap and disposable, but Jewish life is sacrosanct.

“This exceptionalism and supremacy of Jewish life is a fundamental underpinning of the state of Israel. It pervades their every law and protocol, and is matched only by their apparent contempt and disregard for Palestinian life.  Israeli violence of the past few weeks is generally accepted and expected. Israeli violence, no matter how vulgar, is inevitably couched as a heroic, ironic violence that western media frames as “response,” as if Palestinian resistance itself were not a response to Israeli oppression.”

But when you are dealing with Israel anything is possible.  From Dair Yassin massacre to the mass slaughter of Palestinian refugees in Sabra and Shatilla camps in Lebanon, and from the Jenin refugee camp carnage to the total destruction of Gaza in 2008-’09, Israel sets a new precedent with every new atrocity.

Every crime appears to create a new history of oppression and abuse of human dignity.  But what the Israelis have done this time around is shocking even from their own standards.

Even Nazis and the most depraved mass murderers in history respected certain red lines.  They spared international peacemakers, the Red Cross and relief agencies.  But then when it comes to Israel, there are no red lines.  Nothing is sacrosanct.

From the shock-and-awe attack on the USS Liberty, a battle ship belonging to its own ally, to the assault on the Gaza relief flotilla killing 19 peace activists, most of them from another ally and friend, Turkey, Israel routinely kills at will and annihilates everyone and everything in its way. More important, it always gets away with murder, just as it did in 2010 in Dubai using the passports and identities of friendly countries to assassinate a top Hamas commander.

The question is, how long will this go on? When is enough ‘enough’ for Israel’s protectors and the international community? How long can a tiny state with the population less than that of New York hold the entire world its hostage?

Just like in those Hollywood features when a couple of lunatics hijack a plane full of passengers threatening to blow it up in air, Israel has hijacked our world and threatens to destroy it with its reckless actions and dangerous policies.

Unless someone comes forward to take control of the plane before it blows up, you can be sure as hell that we are all headed for certain doom.

This brazen and continuing onslaught on Gaza is yet another proof – if more proof was ever needed—that Israel is a clear and present danger to the peace and stability of our world.

This is not about Palestinian rights or their never-ending persecution at the hands of a fascist, racist regime. This is now about the shared future of our world.  Israel has become a stinking, open sore not just for the Middle East but the entire civilized world.

If the world does not act and act soon, it could pay a great price—perhaps even greater than it paid in the last two Great Wars.

The tide of global public opinion has already turned against Israel, which is repeatedly seen in spontaneous protests around the world in solidarity with the long suffering Palestinians. 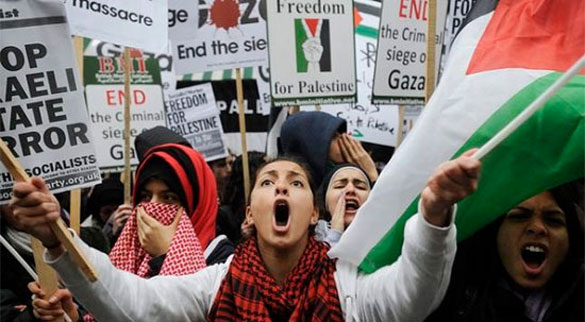 SHATTERING SILENCE…Thousands protest outside the Israeli embassy, in London. Global voices of conscience must now turn into a chorus to shatter the wall of indifference that encircles the West, making it blind to the ordeal of a people who have been paying for its sins for the past seven decades. EPA photo.

These voices of conscience must now turn into a global chorus to shatter the wall of indifference and apathy that encircles the West, making it blind to the endless ordeal of a people who have been paying for its sins for the past seven decades.   It is time to save the world from Israel and save it from its own destructive self before it’s too late.

President Barack Obama and his fellow Americans have to decide where they stand.  Are they on the side of justice, freedom and an individual’s right to live in dignity or are they on the side of Israel? No matter how many innocents it kills and no matter what new depths it plumbs in its hubris?

Can Obama for once stand up for what he believes in, as he has long claimed, and earn his Nobel Peace Prize? Or would he rather play safe continuing to be just another wimp in the White House dancing to the Zionist tunes? He and all those in power would do well to remember the advice of British historian Edmund Burke: “All it takes for evil to triumph is for good men to do nothing.”

And all that the good men of this world have done over the past seven decades in the face of Israeli hubris and injustice is nothing. Absolutely nothing.

Aijaz Zaka Syed is an award-winning journalist and widely published commentator on the Middle East and South Asian affairs.