Not Just Muslim Persons, But Mosques and Muslim-Run Businesses Being Targeted in The Name Of COVID-19 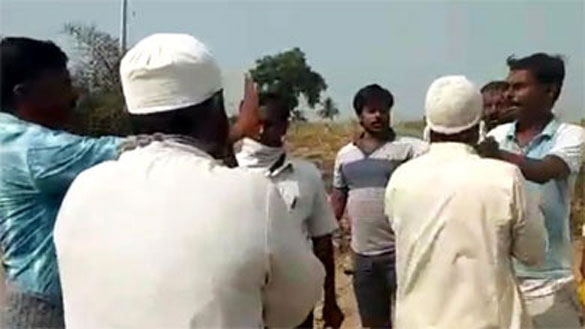 Muslim men being heckled by villagers, accusing the community of spreading coronavirus. (Photo: The News Minute)

Despite a nationwide lockdown due to the COVID-19 threat, attacks on Muslims have increased in different parts of India in the past few days. Not just Muslim persons, but mosques and Muslim-run businesses have also been targeted.

In Haldwani in Uttarakhand, a few men threatened Muslim fruit vendors and told them to shut their shops. According to locals, Hindu vendors weren’t threatened in the same manner. A video of the incident went viral on social media.

The men reportedly said that the Muslim fruit vendors could lead to the spread of the virus and that’s why they were told to go away.

The Uttarakhand Police claims that a case has been registered in Nainital and promised that action will be taken.

According to reports, six people have been booked in connection with the incident.

There have been two confirmed attacks in Haryana so far.

In Haryana’s Jind district, a Muslim family was reportedly attacked by their Hindu neighbours for not switching off their lights during Prime Minister Narendra Modi’s “9 baje, 9 minute” campaign.

The argument between the Muslim family and their Hindu neighbours reportedly took place on the night of the PM’s campaign on 5 April, after some Hindus began bursting crackers.

The next day, four brothers in the Muslim family – Basheer Khan, Sadiq Khan, Nazeer Khan and Sandeep Khan – were allegedly attacked by their Hindu neighbours with sharp weapons. They all suffered head injuries.

One of the neighbours, Sanjay Kumar, told BBC Hindi that the fight took place because the Muslim family didn’t “respect PM Modi’s appeal by not switching off their lights.”

The village Pradhan, Ramkesh Kumar, also seemed to side with the Hindus. “The fight could have been avoided had all the families turned off their lights,” he was quoted as saying by BBC Hindi.

Four people are said to have been booked for the attack.

Another attack took place in Haryana on the intervening night of 4 and 5 April. Shots were fired at a mosque in Dhankot village in Gurugram. No one was injured. A complaint has been filed by the Imam of the mosque, who was sleeping inside the building at that time. Empty cartridges were found at the spot but the police are yet to identify the gunmen.

The Delhi Minorities Commission has sent a notice to the Delhi Police claiming that a mosque was attacked in Mukhmelpur village near Alipur in North West Delhi.

According to Delhi Minorities Commission chairperson Dr Zafarul Islam Khan, around 200 people attacked the mosque on 3 April. The minorities panel alleged that the mosque was ransacked and partially burnt.

However, the Delhi Police has denied any knowledge of the incident.

According to a report in The Wire, milk sellers belonging to the Muslim Gujjar community were beaten up in some Hindu majority villages in Punjab’s Hoshiarpur district.

“Several families of the Muslim Gujjar community in Hajipur and Talwara blocks of Hoshiarpur district were allegedly beaten by unruly groups in many Hindu majority villages. The Gujjars had to throw hundreds of litres of milk into Swan, a rivulet of the Beas river, amidst their social boycott, as they were also not allowed to leave their mud-house dwellings,” the report said.

A Muslim Gujjar milk-seller in Himachal Pradesh’s Una district allegedly killed himself after being subjected to social boycott.

Some of the most serious communal attacks, in this context, took place in the state of Karnataka.

Earlier this week, a video from Bidari village in Bagalkot district went viral in which a mob can be seen kicking and humiliating Muslims who had gone to fish in the Krishna river.

The attackers can be heard saying “You people (Muslims) are the ones who are spreading this disease (COVID-19).”

Another incident took place in Kadakorappa village in the same district, where goons are said to have barged into a mosque and attacked people praying there.

In another incident, on the night of 5 April, two mosques were reportedly attacked in Belagavi. According to the police, the mosques were attacked because they had kept their lights on despite the PM’s appeal to switch them off for nine minutes at 9 PM on 5 April.

According to a report in The News Minute, in both the cases, the attackers barged into the mosque and demanded that the lights be turned off. The police is said to have arrested over 20 people in connection with the two incidents.

“We have been working with police permission. But today (Monday, 6 April), they (goons) followed us and hit us with bats.  They didn’t say anything. They hit me on the hand and head,” Syed Tabrez, one of the workers, told The Quint.

“They told us that we are not allowed to distribute food, that we are all from Nizamuddin. They said the virus is spreading because of you and that we cannot distribute the food. There was some trouble there. then the police said we can distribute the food and supported us,” Tabrez further said, recalling an earlier confrontation with right wing cadres a few days before the attack.

The Swaraj Abhiyan workers were accused of spitting in the food as well.

Then in 2nd Kolya in Mangaluru, posters were put up saying, “In the interest of citizens of 2nd Kolya, Kaneertota, no Muslim trader is allowed into the village till the coronavirus has completely gone away. Signed: All Hindus, 2nd Kolya.”

Taking cognisance of such attacks, Karnataka chief minister BS Yeddiyurappa has warned against blaming the Muslim community for the virus.

This is not an exhaustive list but only some of the verified or reported attacks on Muslims, their businesses and or places of worship in the past few days related to COVID-19.

It does appear that the attacks have increased after several people who attended a Tablighi Jamaat congregation in Delhi in March, tested positive for the virus.

“Having COVID-19 is not anybody’s fault. Every case is a victim. It is very important that we do not profile the cases on the basis of racial, religious and ethnic lines,” he said in a press conference on Monday, in response to a question on India.

(With inputs from Arun Dev)

Original Headline: Attacks on Muslims in the Name of COVID-19 Surge Across India