When China imposed trade sanctions on Norway in 2010 for honouring the imprisoned dissident Liu Xiaobo with the Nobel peace prize, it spat out a word we weren’t used to hearing from propagandists for an atheist communist regime, but should get used to today. “It’s a blasphemy,” a party mouthpiece said. 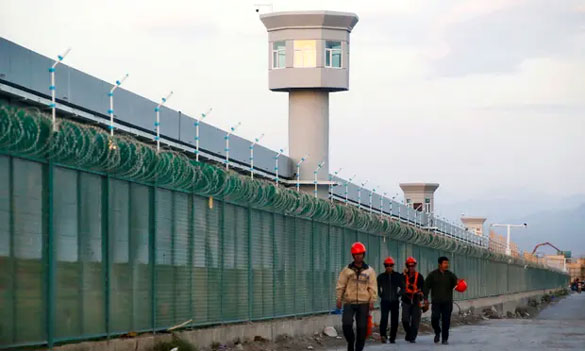 Once, blasphemy was damning the faithful’s gods and sacred books. Now, criticism of the world’s largest dictatorship has become sacrilegious. You shouldn’t be surprised. As some of us tried to say in the 1990s and 2000s, the gap between the sacred and the profane was never as wide as religious sentimentalists and liberal multiculturalists believed.

Photo: From the Nation Interest Portal

They went along with the argument that it was bad taste at best and racism at worst to offend believers. You were “punching down” at largely poor and largely Muslim communities. We thought they were being wilfully blind. They did not understand how men with real power and malice were manipulating religious outrage to consolidate their rule over their wretched population. Iran issued a death sentence on Salman Rushdie in 1989 for satirising Islam’s foundation myths in The Satanic Verses. Its theocratic dictator, Ayatollah Khomeini, was augmenting his powers by claiming to speak for the Muslim world, as well as taking aim at novelists. When the Danish newspaper Jyllands-Posten published largely innocuous cartoons of Muhammad in 2005, to assert the right to mock religion, the Egyptian and Syrian dictators, Hosni Mubarak and Bashar al-Assad, turned a local argument into a global campaign against Denmark. The cries of rage usefully distracted from their corruption and misrule. I could add further examples but they tell the same story. Authoritarian politics and authoritarian religion are just two sides of the same debased coin.

China has stripped away the religious justifications to reveal what was once half-hidden: unadorned and unstoppable power. In many countries, criticising China is the new blasphemy. Nowhere can you see the power more nakedly displayed than in Muslim-majority regimes. Once, they tried to murder blasphemous novelists and screamed about their desire to defend the prophet from the smallest insult. Today, they bend their knees and bite their tongues as China engages in unspeakable atrocities against the largely Muslim Uighur population of western China.

One of the great crimes of the 21st century is being committed in front of our eyes. We see it, yet we don’t register it. The Chinese Communist party is reverting to type, and reviving the totalitarian fear of the Mao era. To bring down numbers of the largely Muslim Uighurs of Xinjiang, the China scholar Adrian Zenz reports, the Communists are forcing women to be sterilised or fitted with contraceptive devices. If they resist, the state sends them to join the one million Uighur people and other Muslim minorities detained in what the state defines as “re-education” camps. A BBC investigation found that China was separating children from their families so they grew up without understanding Islam.

It may be a cheap point but it remains true that if a western country were to display one-tenth, one-hundredth or one-thousandth of the brutality that China is inflicting on Muslims, the global left would be burning with outrage.

If you want to be charitable, its silence can in part be explained by logistical difficulties. Reporters are free to cover China’s suppression of democracy in Hong Kong, for the time being at any rate, but cannot get near Xinjiang without taking extraordinary risks. With no footage of their suffering, millions can suffer unnoticed in the dark.

But the main reasons why Muslims suffer in silence is that the Muslim-majority countries that raged against Rushdie, Jyllands-Posten and Charlie Hebdo have decided to stay silent. They use the idea of Muslim solidarity only when it suits them.

In July 2019, Pakistan, Saudi Arabia, Egypt, the United Arab Emirates, Algeria and other Muslim-majority states that pose as defenders of the faith helped to block a western motion at the United Nations calling for China to allow “independent international observers” into the Xinjiang region. Iran issues occasional criticisms but wants Chinese support in its struggle against the Trump administration and so keeps its complaints coded. Their hypocrisy is almost funny, if you take your humour black. Iran, Egypt, Syria and dozens of other countries that could not tolerate a magical realist novel can live with the mass sterilisation of Muslim women. They will give concentration camps a conniving wink of approval, but draw the line at cartoons in a Danish newspaper.

Many have been bought off. China is now a more active and influential voice at the United Nations because so many countries are benefiting from billions of dollars in Chinese investments through its “Belt and Road” infrastructure programme. As Norway found in 2010, and Australia found this year when it asked for an international inquiry into the origins of Covid-19, those who blaspheme against China face cyber-attacks and sanctions. Better to take the rewards and avoid the punishments.

Following the money, however, can lead you into a dead end. In a survey of China’s growing power, the Economist noted it was making the world safe for autocracy. Recep Tayyip Erdogan, for example, keeps his conservative base happy in Turkey by posing as an ostentatiously Islamic strongman. But he is not likely to condemn the abuse of Muslims by China when he is just as keen on abusing the rights of his domestic opponents. The Chinese world order appeals to the freemasonry of publicity-shy sadists. You say nothing about what we do to our subject people and we will say nothing about what you do to yours.

“The idea of the sacred is quite simply one of the most conservative notions in any culture, because it seeks to turn other ideas – uncertainty, progress, change – into crimes,” said Salman Rushdie when he was in fear of his life in 1990. He was talking about conservative Islam. China is now turning criticism of its disastrous record on incubating the Covid-19 virus and its atrocities against its Muslim minorities into crimes, and the people who should be shouting the loudest are bowing their heads in reverential silence.

Nick Cohen is an Observer columnist

Original Headline: Why do Muslim states stay silent over China’s abuse of the Uighurs?