Films on the land of prophets 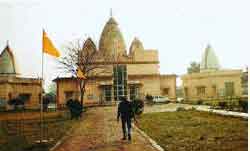 Two documentaries made by Vidya Bhushan Rawat lead the viewer to a surprising tranquillity within Ayodhya, which has a rich diversity of religious denominations and a long history of their peaceful coexistence.

AYODHYA is more or less synonysmous with strife and an unresolved issue in the context of the events of December 1992, when kar sevaks brought down the Babri Masjid. However, what is striking is that despite all these years of communal polarisation, particularly around Ram Janmabhoomi, there seems to be a strange tranquillity within the town and among its people, exemplified in the rich diversity of religions and history of their harmonious coexistence over centuries.

The place by itself evokes no hostility - if anything, there is remorse among those who may have partaken in bringing down the Babri Masjid - and the people are emphatic that the problem is not religion, but a specific brand of politics. In fact, why should religion be a problem for the people of Ayodhya, asks Vidya Bhushan Rawat, an independent film-maker and social activist, who has recently completed two documentary films on the rich variety of religious denominations that exist there.

What is left unsaid is an uncomfortable fact and this is what Rawat does very revealingly. Through the lens of his camera, he digs out that which is invisible to the public; he shows that people are fed up with the continuous sense of tension in the town each time the Vishwa Hindu Parishad (VHP) decides to launch a nationwide campaign on the issue of constructing a Ram temple or each time the Bharatiya Janata Party decides to make the temple an issue.

The two documentaries, which have less in terms of narrative and more in terms of content and information, were completed recently, after over one and a half years of research. Titled Ayodhya Se Maghar Tak: Ayodhya Ki Sanskritik Viraasat (From Ayodhya till Maghar: Ayodhya's Cultural Heritage) and Viraasat Ki Jung (The Struggle to Define a Legitimate Heritage), the films detail the innumerable Sufi shrines, which, unknown to many, have coexisted for centuries with Buddhist, Sikh and Jain shrines. It is not a treatise on the religiosity of the place but more an exposition on the history of coexistence among the people of Ayodhya. The problem, as Usha Gupta, one of the persons interviewed, says, "has come from outside", referring to political interference.

The Sufi shrines are well maintained by the people and are visited by persons belonging to all communities, including many people from the majority community. Ayodhya is also called "Khurd Mecca" or the "Small Mecca" because of the presence of several tombs or dargahs of Sufi saints.

Dargah Naugazi, an impressive grave 18 yards (16.2 metres) long, named after a pir (saint) called Nuh Aleihi Salaam, is located in a narrow lane. Interestingly, Nuh is believed to be Noah and the grave the famous Ark. Another interpretation is that the mound perhaps was built over the remains of the Ark. The shrine, visited by scores of devotees, has no independent custodian. Ram Milan, a devotee who makes an offering every day, says that for him the dargah is no less than a temple. He experiences a lot of mental peace when he visits the dargah. Ram Milan, like most of Ayodhya's residents, is not interested in the background of the pir. And like the rest, he is not the kind who would willingly desecrate a place of worship.

The films are not about the beliefs of people. However, they reiterate that intolerance among the people is not a natural trait but the outcome of a consciously cultivated process. For instance, the Dargah of Sayyed Mohammad Ibrahim, named after a 17th century figure, was fiercely protected by the local people, including several Hindus, when its dome was attacked in December 1992. Sayyed Mohammad Ibrahim is believed to have been born during the reign of the Mughal emperor Shah Jehan and ruled a small principality. Influenced by Sufi teachings, he renounced his worldly pursuits. According to local legend, he arrived in a boat, pictures of which are depicted on his shrine. A large number of Hindu halwais, or confectioners, from the Hanumangarhi area visit the shrine every Tuesday and makes offerings and distribute prasad.

The Teen Darvesh dargah, whose dome was also targeted by bigots in December 1992 after the demolition of the Babri Masjid, is near Naugazi. No one knows the identity of the three saints buried there but it has a large following coming from all communities.

The most notable after Naugazi is the dargah of Sheesh Paigambar. Considered one of the holiest shrines in the town, some people believe the saint to be the son of Adam. There is a spot called the Ganesh Kund, on the southern side of the grave, where devotees take a dip. There appears to be no contradiction of faiths here.

In fact, there are several features that are seen as protests against religious orthodoxies including patriarchy. For instance, the dargah of Badi Bua located at a railway crossing between Ayodhya and Faizabad, is one of the few dargahs of women in the area. Badi Bua was the sister of Hazrat Khwaja Nasiruddin Chiragh Dehli, the spiritual successor of the Hazrat Khwaja Nizammudin Auliya, the Chisti Sufi of Delhi. Legend has it that she was a strikingly beautiful woman, who chose to serve God by serving the poor. She faced a lot of opposition from the clergy, to which she is supposed to have declared famously: Na Aalim Rahega, Na Zalim (There shall be no place for either the cleric or the oppressor). Badi Bua's shrine is revered by one and all.

THE film-maker has tried to bring out the contrasts in the prevalent ethos of Ayodhya. In Viraasat Ki Jung, while in one scene people are shown praying at the Ram Ghat in the calm waters of the Sarayu at the break of dawn, there is another, of the Trishul Deeksha ceremony of Pravin Togadia held in Delhi.

Maghar, where the poet-saint Kabir is said to have spent his last days, is 150 km from Ayodhya. It is said that the Brahmins of Ayodhya persuaded Kabir to turn to Kashi, where he could attain moksha. Instead, he went to Maghar, which, it was believed, would turn a person into a donkey in the afterlife. Kabir died at Maghar and there is a structure dedicated to him on which his teachings are engraved.

The people of Ayodhya can never forget December 1992. "The Masjid was broken, there is no doubt about that. It will be a matter of pride for the entire world if the locals rebuild it jointly. Aaye di ke bawaal se log pareshaan ho gaye hain, rozi roti ka sawaal bana hua hai (People are fed up with the vitiated atmosphere, they are more concerned with issues of livelihood). The business class and the working class can no longer tolerate the tense atmosphere in the district," says a local resident in Viraasat Ki Jung. He says that the local people will oppose any organisation seeking to inflame passions around the mosque and temple. At the Anees and Chakbast Library in Faizabad district, there are some people who actually express remorse at what had happened. Says one: "The Babri Masjid should not have been brought down. But it happened." Then he clarifies that he had gone for theparikrama but not for the demolition. Evidently, there is a feeling among the people there that what happened was grossly wrong.

The sense of compositeness is exemplified in Raj Rani's statement. A Dalit woman, she lives near the Dargah Shaikh Shamsuddin Fariyad Ras, which is located in a prominent Hindu locality. She says that the dargah is as important to her as Ram and that the Baba has never failed her in times of distress. Similarly, the 700-year-old Dargah Bijli Shaheed is revered by the Dalit family that lives in front of it. An upper-caste family maintains the dargah of Makhdoom Shah Fateullah. Rajpal Singh, a member of the family, does not associate the dargah with any religion. He says that people visit it to cure themselves of ailments.

In Akbarpur district, formerly part of Faizabad district, is the dargah of Kachhauchcha Sharif, deemed to be the resting place of the famous Sufi Sayyed Ashraf Jahangir Samnani. Born in 1307 in Samnan province of Iran, he was motivated to travel to India by a Sufi seer. Travelling through Samarkand and Bukhara, he went to Bengal and Jaunpur, where he set up a Sufi centre. Samnani visited Ayodhya and breathed his last in Kachhauchcha Sharif. This place attracts people from all denominations. It is said that more Hindus than Muslims visit the shrine.

Similarly, the two famous Jain temples in Ayodhya and the Gurudwara Brahmakund Sahib - where three prominent Sikh gurus, including the founder of the Sikh religion, Guru Nanak, are known to have preached - are symbolic of the peaceful coexistence of various communities over the centuries.

There is also a strong Buddhist influence in the Awadh region. Ayodhya was said to be the second most important pilgrimage site after Shravasti, the capital of Koshal. Sacred Buddhist sites such as Kushinagar, Sarnath and Shravasti were once part of the Awadh province.

"Celebrate Ayodhya's cultural heritage - do not destroy it" is the message of both the documentaries. Ayodhya is much more than the birthplace of Ram, and the people of Ayodhya believe in this.

There is some local history attached to these shrines and it appears that the grip of orthodoxy has weakened considerably over the years as people have experimented with other faiths. The area has a history of rejecting orthodoxies, a practice that continues as people flock to the Sufi shrines.

There are about 80 important dargahs in Ayodhya town itself with several others spread over Faizabad district. Rawat says that Ayodhya was known as Shahar-e-Auliya or the city of Sufis. It is also the land of Mangal Pandey, who led the Meerut rebellion in 1857 and the famous vocalist Begum Akhtar; it is also the place where freedom fighter Ashfaqullah Khan was hanged (the hanging took place at the Faizabad Jail). It was in fact this heterogeneity that was attacked in December 1992.

Ayodhya's heritage is multi-cultural and multi-religious, and this has to be recognised and preserved. It is here that both the documentaries successfully show that the dominant forms of showcasing places and people's opinions may not reveal everything and that there is a lot that is unsaid, unheard and unseen.