Pakistani Hindus are a Resilient Minority Too

Disbelief swept social media when the scion of an influential Pakistani Hindu family, Karni Singh, married an Indian woman with much Rajput pomp in Jaipur last week. It was understandable as any mention of Pakistani Hindus conjures up images of a necessarily persecuted minority. Expressions like influential Pakistani Hindu groom as such naturally sound oxymoronic. How has been it possible for Karni’s family to maintain its status and influence? This was the question that baffled many. The likes of Karni do not fit into how Pakistani Hindus are perceived in India. It has a lot to do with the idea of India seen as an ideal one in contrast with flawed Pakistan and prompts a broad-brushed portrayal of Pakistani Hindus as essentially hounded. The depiction cloaks complicated issues of class and caste besides admirable resilience of many Hindus, who have excelled in varied fields despite odds. 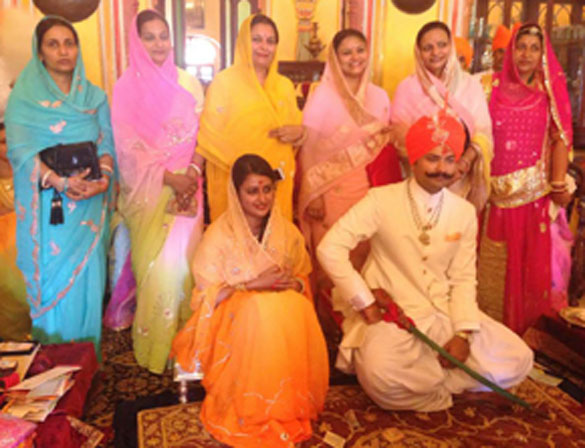 Karni Singh’s family is one of many upper caste Hindus, who have made a mark in politics, judiciary, activism, sports and fashion. In fact, at least one Hindu business family is among the highest taxpayers in Pakistan along with two Parsi clans of hoteliers and winemakers. In politics, Karni’s family has excelled since partition when its patriarch and Hindu Sodha clan head Rana Arjun Singh stayed back in Pakistan. He was a Muslim League member, who ignored calls for joining the Congress. Arjun Singh’s son, Chander Singh, carried forward his legacy and went on to become a parliamentarian, a federal minister and founding member of liberal Pakistan People’s Party (PPP). Chander Singh enjoyed cross-border influence to the extent that he brokered the India-Pakistan thaw that facilitated then Prime Minister Atal Bihari Vajpayee’s historic Lahore trip in 1999. 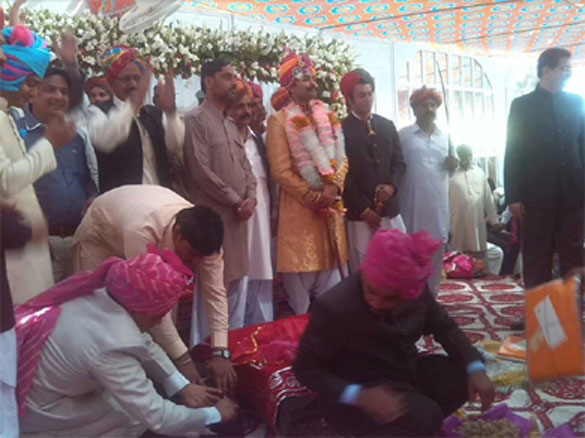 Karni’s father, Rana Hameer Singh, now holds sway in Thar Desert region that has a large Hindu population as Sodha Rajput head. His family has maintained its status in the area over centuries despite many destabilising upheavals due to its unique legacy. Hameer’s forefather and Amarkot (now Umerkot) ruler Rana Prasad had given refuge to emperor Humayun and his pregnant wife after Sher Shah Suri ousted the Mughal emperor in 1540. The royal couple’s illustrious son, Akbar, was born in Amarkot two years later under Rana Prasad’s protection. Akbar would perhaps have never been able to reclaim his father’s empire and expand it had not it been for Rana Prasad’s help. The bond boosted Hindu-Muslim affinity in syncretic Sindh. It endured in places like Umerkot even after the horrible rupture in 1947 that convulsed large parts of the subcontinent. The syncretism was evident when Rana Hameer Singh was anointed his father’s successor in May 2010. A large number of Hindus and Muslims joined his grand coronation in a procession in Hindu-dominated Mithi town. Hameer Singh arrived at the venue to his coronation in a convoy of hundreds of vehicles as two girls performed aarti. Hameer Singh sat on a decorated chariot while Rajputs in traditional headgear lined the road amid Hindu chants as part of an 800-year-old coronation tradition. 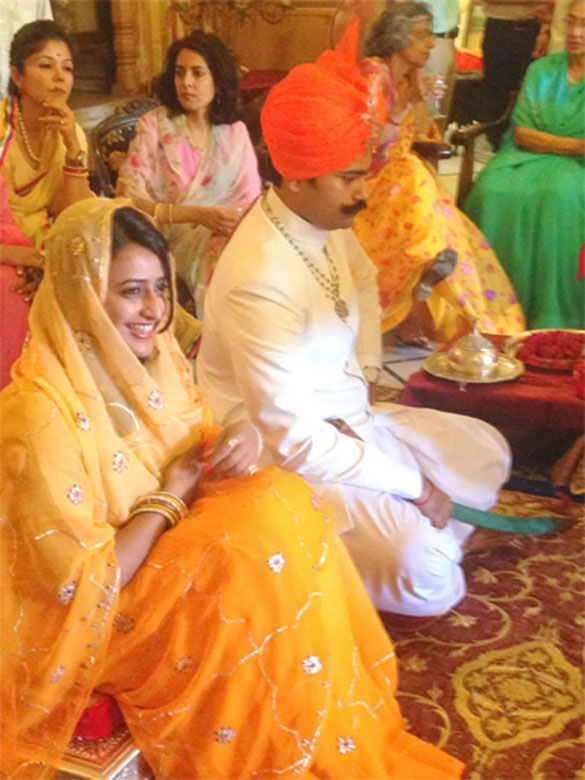 Communist leader Sobho Gianchandani was antithesis of the Ranas and perhaps best embodied Hindu resilience in Pakistan. His death aged 94 in Larkana in December 2014 ended his seven decade struggle against the establishment, imperialism, dictatorship, unjust society and Sindh’s autonomy. Gianchandani, who belonged to a landed upper caste family as well, refused to leave Pakistan in 1947 even as he was repeatedly incarcerated after his Communist Party of Pakistan was proscribed six years later. His consciousness was shaped a decade earlier while he studied at Rabindranath Tagore’s Shantiniketan University. Gianchandani remained resolute as one of Pakistan’s best-known Marxists. He organised peasants and industrial workers. The mobilisation helped Zulfikar Ali Bhutto’s socialist PPP win the 1970 national election within two years of its formation. Pakistan’s slide began after General Zia-ul-Haq deposed Bhutto and had him hanged. The USSR’s invasion of Afghanistan eight months later made Zia the darling of the west as he colluded with it against the Soviets. Gianchandani was a leading voice of dissent against Zia-US alliance that abused religion, boosted fanaticism and began corroding the society in the 1980s. Despite his lifelong anti-establishment credentials, the government at least recognized Gianchandani’s contribution to literature when he became the first Sindhi to be awarded Pakistan Academy of Letter’s Award of Excellence in 2004.

Away from the uncertainty of activism in feudal, rural Sindh, designer Deepak Perwani remains Pakistan’s best-know fashion designer and most glamorous Hindu. He belongs to landed elite among Pakistani Hindus based mostly in Karachi and Hyderabad and remains enduring symbols of the country’s soft power. As the face of Pakistani fashion globally, the iconic fashion designer has been the originator of Islamic fashion festival, He was named Pakistan’s cultural ambassador to China and Malaysia a decade earlier. Deepak’s brother, Naveen Perwani, is among Pakistan’s best-known snooker players, who has represented the country globally and won medals at the Asian Games. But cricketer Danish Kaneria remains the country’s most successful Hindu sportsman. He became the country’s highest wicket-taking test spinner before match-fixing ended his promising career. Kaneria’s cousin, Anil Dalpat, too played for Pakistan in the 1980s. 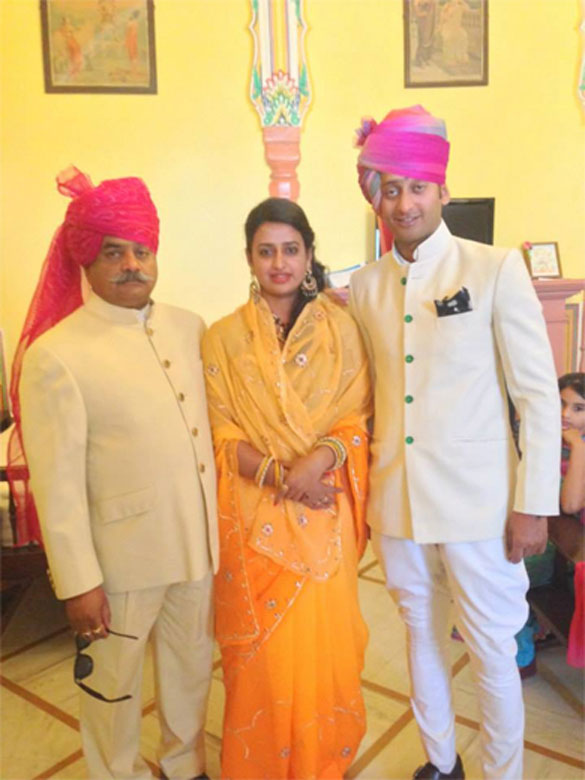 Pakistani Hindus are predominantly traders, who have excelled in big businesses as well. Hindu-owned Chawla International (CI) is one of Pakistan’s biggest agricultural products company. It is among the largest suppliers of pesticides and owns Pakistan’s biggest rice mill. Businessman Bhagwan Das Chawla set up CI in December 1999 after excelling in family trade in tobacco, coal and beverages. Chawla’s main business before 1999 was octroi/tax collection nationally for the government with annual turnover of one billion.

Beyond business, Captain Danish earned the distinction of being the first Pakistani Hindu army officer when he was commissioned in 2006. Another officer Aneel Kumar has followed in his footsteps. Both belong to Sindh and joined the army despite family opposition. Danish has served in Wana in Pakistan’s tribal areas, where army soldier Ashok Kumar died fighting Taliban terrorists last year.

In judiciary, Rana Bhagwandas remains a role model thanks to his integrity. He went on to take the highest judicial post when he served as the first Hindu and third non-Muslim chief justice of Pakistan. He headed the country’s Federal Public Service Commission after his retirement. Bhagwandas is a regular visitor to Hindu mystic Neelu Bhagwan’s ashram in Uttar Pradesh and a follower of Sindh’s most-venerated saint Ishtadeva Uderolal Jhulelal or Darya Shah. The saint epitomises Sindh’s unique syncretic culture. Both Hindus and Muslims venerate mystics like Jhulelal, who are often known by different names among the two communities. A mosque and a temple exist in harmony on Jhulelal’s mausoleum complex near Sukkur in Sindh.

Sindh retains the semblance of its inclusive past as a result of the legacy of the mystics such as Jhulelal. It is home to all religious and ethnic communities. Over 90% Pakistani Hindus live in the province, where Hindus account for 49% of the population in Umerkot, 46% in Tharparkar and 33% in Mirpurkhas district. Their population varies from 8-19% elsewhere in Sindh. A majority of them belong to lower castes, who have not been beneficiaries of caste reform like in India. It is no coincidence that the Ranas, Gianchandhanis, Perwanis, Kanerias, Chawlas etc are all upper caste and largely shielded by vulnerabilities Dalits face particularly in rural Sindh. The plight of lower castes mirrors that of Muslim peasants reeling under the oppression of waderas (landlords), who dominate politics and have frustrated all attempts to carry out land reforms.

A minuscule minority of Goan Christians and Parsis like upper caste Hindus have excelled in virtually all fields purely because of their class. Goan Christian community in particular has given Pakistan some of its finest journalists, top ranking military officers, educationists, sportspeople, businessmen, musicians, jurists etc. Its affluence is in total contrast to Dalit Christian converts in Punjab, who continue to suffer discrimination like Hindu scheduled castes. A weak state and deep-rooted feudalism compounds their problems and make them softer targets of violence. Benefits of the quota systems in legislative bodies and jobs have not benefited lower castes as the state sees the Hindus as a monolith without taking yawning disparities between upper and scheduled castes into account. Reservations as such have been reduced to tokenism as upper castes exclusively benefit from them. Except Khatu Mal Jeewan, Kanji Ram and Poonjo Bheel, all other 21 Hindus lawmakers in Pakistan’s parliament and four provincial assemblies are upper caste. Pakistani activists have long complained 10% upper caste Hindus rule the majority 90% scheduled castes.

Quotas in jobs have not helped lower castes either at both federal and provincial levels as they are not exclusively entitled to them. Minorities on the whole irrespective of their varied conditions are entitled to five per cent job reservation in federal government services, including the Central Superior Services (equivalent of Indian Administrative Services) and provincial jobs in Punjab and Sindh. Smaller provinces Baluchistan and Khyber Pakhtunkhwa offer them three per cent job reservation. Quotas would remain meaningless as long as they are not implemented with greater sense of purpose that ends all forms of discrimination as well. Perhaps serious revision of text books that portray minorities as the other could be the first step in this direction. Pakistani state’s attempts to overhaul the country in the face of existential nihilistic Taliban threat would remain meaningless unless well-being and equality for minorities is not ensured. It is now or never for Pakistan to understand diversity is a strength that needs to be nurtured. The sooner it is realised, the better it would be for the state at crossroads and corroding from within courtesy Zia’s toxic legacy of exclusion dating back to the 1980s.