Pluralism Was Once the Hallmark of the Arab World, So the Exodus of Christians from the Middle East Is Painful To One Islamic Scholar 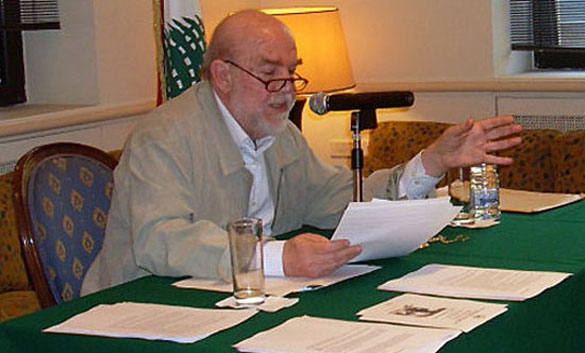 Tarif Khalidi is a big, bearded bear of a man, the kind you would always choose to play Father Christmas, or perhaps a Cossack leader sweeping across the Russian steppe, reins in one hand, sword in the other. But Tarif – or Uncle Tarif as I invariably call him – is an Islamic scholar, the most recent translator of the Quran and author of a wonderful book of Muslim stories about Jesus. I am thus surprised – but after a few seconds not at all surprised – to hear how well this Palestinian from Jerusalem got on with the Imam Musa Sadr, the Shia leader in southern Lebanon who did more to lift his people from squalor than any I can think of – until Colonel Muammar Gaddafi had him murdered in Libya in 1978.

“He took on the Christians of Lebanon in an extraordinary manner,” Tarif says. “He revived Islamic interest in Jesus and Mary. He was an extraordinary performer. He almost embraced Christian theology. He would lecture in churches with the cross right behind him!” But as we weave our way between religions, I realise what is grieving this most burly of professors – he teaches at the American University of Beirut – as he speaks slowly and eloquently of the almost biblical exodus of Christians from the Middle East.

“It is a tragedy and a blow to the basic pride of Arab Islamic civilisation. It is one of the most horrific developments of recent years. If Islamic civilisation has anything to show for itself, it is its record of pluralism and coexistence. I said the other day that if the Nobel Peace Prize had existed hundreds of years ago, it would be awarded to Islamic civilisation. But now the barbarians are at the gates, Christians are killed, nuns are kidnapped” – Tarif is referring to the nuns taken from the Christian Syrian town of Maaloula – “and bishops disappear. This strikes at the very heart of what we stood for.”

I ask him an obvious question. What did it feel like to translate the Quran? The answer comes straight from the shoulder. “I feel a big difference in rhetoric and eloquence. Some parts of it are very moving, very poetical. Other parts are humdrum, prosaic, and repetitive. It’s an uneven text.” He pauses, and then says that “there has not yet been a higher criticism of the Quran. It may happen, but it hasn’t. Christians indulged in this higher criticism of the Bible at the end of the 19th century. We need, for example, very seriously to re-examine things between men and women. The implication of these things have not been fully explored. Veiling, for instance. You need to re-think basic human rights issues. And what does ‘revelation’ really mean?”

Tarif is not criticising the Quran and he doesn’t use the word ‘re-interpretation’ – although I do, and he agrees this is what he is talking about. Islamic scholars have endured much harassment in the past for suggesting that it is time for Muslims to re-interpret their holy book. I suggest – with some hesitation – that I find Shia Muslims readier to discuss the meaning of the Quran than Sunni Muslims, and Tarif Khalidi agrees at once.

“Shiite clerics get a far more rigorous education than Sunni clerics. They have a solid education in the theological sciences. They learn Aristotelian logic before the Quran. I think theology is much more alive in the Shia community. Shiites are more theological, Sunnis are legalistic. And the Shiites have their ‘passion story’ about Hussein and Ali. It is an invitation to reflect on the need for justice.”

It is almost a relief to turn to the Middle East today, although Tarif’s response is unexpected. “I think the Middle East is part of a more general epidemic – it’s happening in the Ukraine, in north Africa. It could be a kind of contamination that runs through unstable societies. It’s extremely difficult to differentiate what in each case is going to happen. It’s very sad, the cost is very high in human life. And do you notice how these leaders haven’t said a single word about the casualties among their own people? They talk about reform, elections, a new constitution, but not a word about their own people’s suffering.

“Syria began as a legitimate war but now it’s a kind of melee, one side infecting the other with its fanaticism.”

Of Egypt, Tarif is a little unkind, especially towards Mohamed Morsi, Egypt’s first elected president who could be “described as a clown”. Morsi “was like a man who felt himself parachuted into a job he had only dreamed about. He had been in opposition so long, he didn’t know what to do when he got to power.” Every Egyptian, Tarif suspects, wishes to be a Nasser. Tarif doesn’t name names but I can certainly think of one army officer who would like to try on Nasser’s clothes.

Tarif, I should add, doesn’t buy my line about Christianity dying out in the West. He talks about Americans in the Mid-West and churches filling up because of Pope Francis. Asked by another journalist whether he has taken heat from extremists, Tarif replied that “nobody has challenged me, because most of these fundamentalists are illiterate – so that’s a mercy”.

Not so illiterate, however, that they would have missed Beirut’s most famous faux pas of recent years. The avuncular Tarif was lecturing at the American University about the Quran and the hoarding advertising his talk read: “The Quran, by Tarif al-Khalidi.” Mobiles rang at once and the offending advertisement was swiftly taken down before anyone had time to point out that the author of the Quran was God.

Meddling With Medals and Other Fine Nouns

I have always hated sport, ever since a nasty little prefect beat me with a cane at school for reading a book on Czech history at a football match. I was far more interested in the defenestration of Masaryk in Prague than exhorting a bunch of blue-and-black dressed clods with the immortal words: “Come ON, Sutton!” So it befell a colleague watching the Sochi Olympics to inform me that “medal” – like other perfectly decent nouns – has been turned into a verb.

Athletes are now en route “to medal”. I suppose we’ve had ‘bemedalled’ with us for years although it’s often employed a bit derisively. I used it about the UN commander in ex-Yugoslavia who had more medals on his chest than Dwight D Eisenhower wore when he was Supreme Allied Commander in the Second World War. In any event, “to medal” must join “conflict” – which has now become a verb for people who are confused about their aims. Such folk, as you know, are now ‘conflicted’.

Another howler passed my way the other day: “to evidence” as in “to evidence the assertion”. In my day, evidence was something you gave in court – or tampered with if you were a bent copper – but “to evidence” must now take its place beside “to incentivise” and “to prioritise”. I’m still trying not to grind my teeth when I hear from someone who promises to “revert”. What’s wrong with “reply”? It could make you commit murder. Which, I fear is both a noun and a verb. But what happened to the wonderful word for a person likely to be murdered? He or she was once called, according to my Webster’s, a “murderee”. Murderees now include those who would “medal” or “revert”. We should bring “murderee” back to normal usage.