Workshop For Madrasa Students On The Theme 'Islam Is Religion Of Peace And Pluralism' Organised By Education For Peace, An Initiative Of The New Age Islam Foundation

Education for Peace, an initiative of the New Age Islam Foundation organised the first session of the three-day educational training workshop titled “Angels of Peace Pilot Project” on January 3, 2014 on the theme: Islam is Religion of Peace. It was aimed at bringing students from different madrasas into interaction with each other and learn from Islamic scholars about Islam's inclusivist, pluralist message, encouraging co-existence among all communities as well as the value of modern, secular education. Madrasa graduates and Islamic scholars Mr. Ghulam Ghaus and Mr. Ghulam Rasool Dehlvi spoke on these issues respectively. They are also educated in mainstream educational institutions and are regular contributors to the multilingual Islamic website New Age Islam.

The prime concern of the workshop was raising awareness among madrasa students about Islam’s teachings of global peace, religious harmony, inclusiveness, tolerance, Prophet Muhammad’s dealings with non-Muslims and importance of modern, secular education along with religious education. 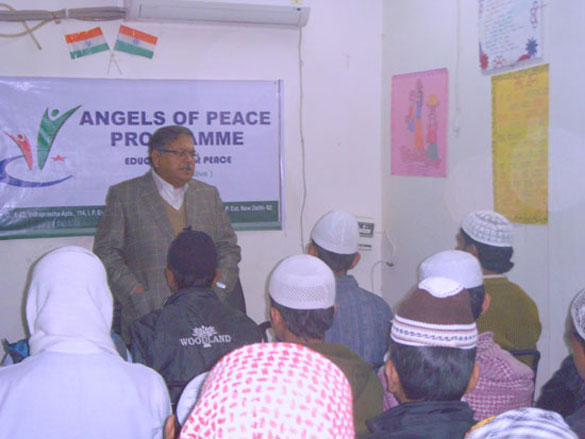 Mr. Sami ur Rahman welcomed the guests and students of Madrasas and initiated the programme by introducing the speakers Mr. Ghulam Ghaus and Mr. Ghulam Rasool Dehlvi respectively to the audience. He also presented the schedules and other details about the next sessions of the workshop. 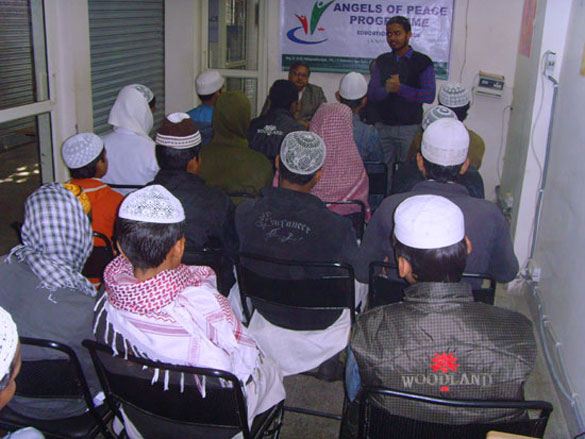 Speaking on the topic “Islam: A religion of Peace”, Mr. Ghulam Ghaus began to address the students by posing a question to them: “Despite the fact that Islam teaches peace, why is it that we do not see peace prevailing among Muslims?”

Having offered a proper answer to this question, he advised them saying: “What we can do to implement peace in Muslim societies is to study the rights of non-Muslims given by Islam. He then went on enumerating the rights of Non-Muslims enshrined in Islam with special reference to the following verses of the holy Quran:

In an explanation of the above verse, he said that the prophet was sent as a mercy to the whole world with no exception to Muslims or Non-Muslims.

“And if your Lord had willed, He could have made mankind one community; but they will not cease to differ” (11:118)

“Because of that, We decreed upon the Children of Israel that whoever kills a soul unless for a soul or for corruption [done] in the land - it is as if he had slain mankind entirely. And whoever saves one - it is as if he had saved mankind entirely. And our messengers had certainly come to them with clear proofs. Then indeed many of them, [even] after that, throughout the land, were transgressors”. (5:32)

“And had your Lord willed, those on earth would have believed - all of them entirely. Then, [O Muhammad], would you compel the people in order that they become believers”? (10:99)

He added saying that any verse quoted out of the context misses the whole point of the message of the Qur'an. The following two verses, he explained, undeniably reject the idea of hate and prejudice against non-Muslims:

Having cited the above-mentioned Qur'anic verses, Mr. Ghulam Ghaus summarised his point and said that we cannot deserve fair treatment from non-Muslims living in our country until we ensure their co-religionists are provided with their due rights in Islamic states.

He stressed the importance of reconciliation among peoples of different faiths to build global peace and strengthen communal harmony, citing the following Qur'anic verses:

"So have Taqwa (fear and obedience) of Allah and reconcile the differences between yourselves."[Al-Qur'an 8:1]

"Indeed the Believers are but brothers. Therefore reconcile the differences between your brothers, and fear Allah so that you may receive mercy." [Al-Qur'an 49:10]

"When two parties of the Believers fight each other, then make reconciliation between them." [Al-Qur'an 49:9]

It is clear from the verses above, he explained, that reconciliation is greatly valued in Islamic teachings. In terms of social wellbeing, reconciliation is of paramount importance, as it brings mutual hostility and grudge to an end paving the way to the establishment of peace and harmony in larger societies, he further said.

He went on saying that one can easily evaluate the great importance that Islam attaches to reconciliation by reflecting on the permissibility of telling a lie in Islam with intent to reconcile between two warring persons or groups. While Islam strictly forbids lying, he expounded, it allows one to tell a lie for the sake of reconciliation. In fact, Islam does not declare such a person a liar, he averred quoting the following Hadith (the prophetic saying):

It was narrated by Umme Kulthum bint Uqbah that she heard the Messenger of Allah (peace and blessings of Allah be upon him) say: “He is not a liar who brings about reconciliation among people, conveys good words and says good things.” (Bukhari and Muslim)

Expressing his concerns over the present pathetic state of affairs in Muslim societies, he said: “Today if we introspect, we find that our social behaviour goes much against the above Hadith. When a Muslim fights his kith and kin over a trivial matter, the belligerent people abruptly come to add fuel to the fire. No one cares about restoring love and rebuilding peace among them. Had this perverse attitude not been in our society, our houses would have been in complete peace and tranquillity”.

He concluded his speech saying that the madrasa graduates and students are responsible enough for preaching peaceful Islamic teachings with the beautiful ways and manners outlined in the holy Quran such as: “Call to the way of your Lord with wisdom and goodly exhortation, and reason with them in the best manner” (an-Nahl- 16:125).

Afterwards, Mr. Ghulam Ghaus interacted with students at length, asked them several questions pertaining to his speech, pushed them to freely express and exchange their views and sought to dispel their doubts and misconceptions regarding Islam’s standpoints on several social and religious issues.

Mr. Ghulam Ghaus then introduced a very young student from a Delhi government school Mr. Intikhab Raza, aged 8, inviting him to deliver a short speech in front of madrassa students. Surprisingly enough, he spoke eloquently on the topic of Prophet Muhammad’s love and mercy for all the creatures and left the entire audience spellbound.

Mr. Intikhab Raza presented a number of beautiful Qur'anic verses, Prophet’s sayings as well as stories from his life to shed light on the Prophet Muhammad’s merciful treatment with the animals and other living creatures. He particularly dwelt on a famous saying attributed to the Prophet Muhammad (peace be upon him): ‘‘أرسلت إلی الخلق کافۃ’’ (meaning: I have been sent as a Prophet to all the creatures of the world). 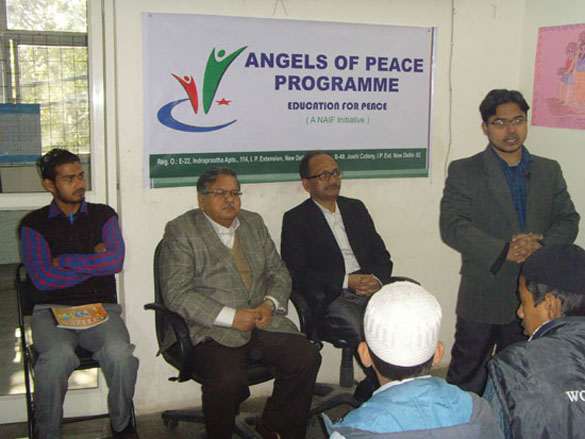 Speaking at the end of the programme, Mr. Ghulam Rasool Dehlvi dwelt on the topic: “Islamic Concept of Education and Global Peace”. He laid special emphasis on Islam’s focus on universal education and human endeavour for intellectual and rational development with an aim to foster global peace and prosperity. With a reference to the world-renowned western historian Professor Phillip Hitti’s book “The History of Arabs”, he recounted Muslims’ contributions to the intellectual development of medieval Europe between the middle of the 8th and the beginning of the 13th centuries. “The Muslims in Spain," Mr. Dehlvi explained, "were the main torch-bearers of the intellectual development, universal civilisation and culture in the medieval era.” “Moreover," he said, "they were the medium through which ancient sciences and philosophies were recovered, supplemented and transmitted in such a way as to make possible the renaissance of the Western Europe.” Mr. Dehlvi quoted a paragraph from Professor Phillip to substantiate his point, which ended like this: “In all this, Muslim Spain had a large share”.

Elaborating the significance of education in Islam, Mr. Ghulam Rasool Dehlvi said acquiring knowledge is an unceasing and never-ending process in Islam, as the Prophet Muhammad (peace be upon him) said: أطلبوا العلم من المھد إلی اللحد’’’’ (Keep acquiring education from the laps of your mothers until you reach your graveyards). He also referred to other Prophetic sayings such as ‘‘الحکمۃ ضالۃ المؤمن، فأینما وجدھا فھو أحق بھا’’ Knowledge is a lost property of a believer, so he/she should get it wherever it is found), and “أطلبو العلم ولو کان بالصین” (Seek knowledge even if you have to go to China for it).

Mr. Dehlvi argued that religious education is entirely virtuous, meritorious and helpful in understanding the ultimate purpose of life, but it is not sufficient enough to lead a prosperous life and fulfil the worldly needs and social responsibilities. He further said that “nowhere in the Quran or Hadith has it been said that only religious education is Farz (mandatory), obligatory (Wajib) or virtuous (Mustahab). Obtaining modern, secular education can also be counted as a purely virtuous and meritorious act that will earn its students great rewards in the hereafter”. He concluded that madrasa students cannot make headway in their life and career until they are trained to meet the materialistic demands of dynamically advancing modern life.

Explaining the Islamic concept of education, he said that the major aim of education in Islam is that people attain knowledge and wisdom to spend their lives in a way that can help the entire humanity and thus serve the larger cause of global peace. He recommended that Madrasa students should directly connect with the primary sources of Islam, especially the holy Quran and Prophet Muhammad’s life, to develop inclusive and holistic ideas about Islam, peace, social harmony and religious tolerance.

Mr. Ghulam Rasool also appealed to all the present madrasa students to voice their concerns, views, endorsements and disagreements by posting them on the New Age Islam forum so that they could be duly considered and properly discussed.

These students imbued with Islamic teachings of inclusiveness, pluralism and now understanding the value of secular education in Islam this week will now have a face-off next week with mostly non-Muslim students from government schools. These face-off sessions between several small groups of madrasa and non-madrasa students will be monitored by senior students and scholars who are well-versed in Islamic teachings of inclusiveness and the value of secular education in Islam. The basic idea is to encourage pluralist thoughts and understanding of Islam's inclusivist message of harmonious co-existence among madrasa students as well as provide a practical opportunity of practicing pluralism with students from different backgrounds.  Most students living in madrasa hostels and even Muslim ghettos are deprived of practical opportunities of interacting with students from different backgrounds and talking to them openly and frankly about concerns of their identity and role in a secular, multicultural, multi-religious society. They will be doing this in the Education for Peace premises in a monitored environment in the next weeks, but hopefully benefit from this experience in their life.

The Angels of Peace workshop was conceived by a Research Scholar at JNU Muriel Potherat who is involved in a number of multi-faith dialogue projects sponsored by New Age Islam Foundation. She is also helping implement it in association with Mr. Sami ur Rahman who has been involved in several NAIF initiatives on providing modern, secular education to students from madrasa background.