In keeping with the Milad tradition, the event started with the beautiful recitation of the Qur'anic verses and holy Islamic songs (Nasheed) by Muhammad Qaseem, a Madrasa graduate and student in Jamia Millia Islamia, New Delhi. 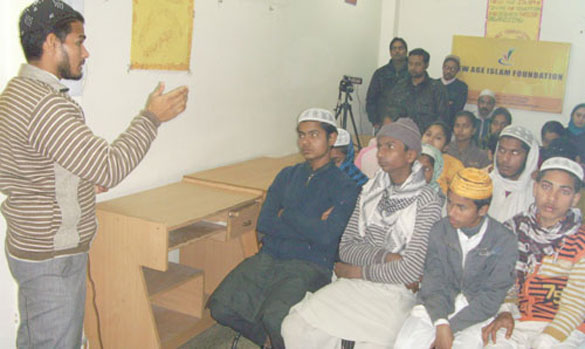 Speaking at the very outset, Mr. Ghulam Ghaus, an Islamic scholar and a regular columnist with New Age Islam, delivered a very comprehensive speech on the religious legality of celebrating the birthdays of the Prophets of Islam. He also touched upon various harmonious aspects of the Prophet Muhammad’s life and prophethood (peace be upon him). Quoting a number of Qur'anic verses and citing numerous examples from the Prophet’s life and traditions, Mr. Ghaus substantiated his point that celebrating the Prophet’s birthday and rejoicing the sheer bounties of God on this occasion is not un-Islamic. He said: “The legitimacy of Mawlid celebrations has been majorly endorsed by the most fundamental sources of Islamic law: the Qura’n and the Hadith. The history of Mawlid celebrations of any one of the prophets goes back to the time immemorial. A particularly strong endorsement was expressed when God, Almighty sent peace on the birth and death anniversaries of the prophet Yahya (pbuh). God Almighty says: "Peace be on Him (the prophet, Yahya) the day when he was born and the day when he will die and the day when he will be raised alive." (Sura Al-Maryam, Verse: 15).”

Mr. Ghulam Ghaus continued: “Here God Almighty gave the way to the Mawlid of Yahya (pbuh) by sending peace on him. It is the same way as today mainstream Muslims have adopted to practice the Mawlid celebrations. Just the same way, the Quran tells us, the prophet Jesus (pbuh) celebrated his own birthday: "And the same peace on me the day I was born and the day I will die and the day I would be raised alive." (Sura Al Maryam, Verse: 33)”.

Having quoted numerous proofs from the holy Quran and Hadith in his effort to justify the birthday commemoration of the prophets, Mr. Ghulam Ghaus summed up: "According to the classical, traditional and many of the highly regarded modern Islamic scholars, the birthday commemoration of the prophets is not only permissible but also praiseworthy and recommended and has its deserving reward. They believe it to be a moral and social bridge linking Muslim groups who may be light years away on account of doctrine but neck to neck in their race to honour and celebrate the birthdays of the Prophets.”

Mr. Ghaus quoted the famous Qur'anic verse in which God Almighty says to the Prophet Muhammad PBUH: “and We have not sent you but as a mercy to the worlds.” (21:107). He explained that this verse reflects that the Prophet’s distinctive quality was that he was blessing embodiment in word and deed not only for a particular Muslim community but for the entire world.

Connecting his speech with the ground realities of the present era, Mr. Ghulam Ghaus said: “today, violence is growing even among Muslims themselves. That is why the prophet PBUH, the messenger of love, kindness, peace and universal brotherhood, is being blamed and humiliated by others. Extremist Muslims have been misinterpreting the teachings of the holy prophet Muhammad (PBUH) in pursuit of their petty interests, thereby presenting a distorted image of Islam and the Prophet Muhammad PBUH.” 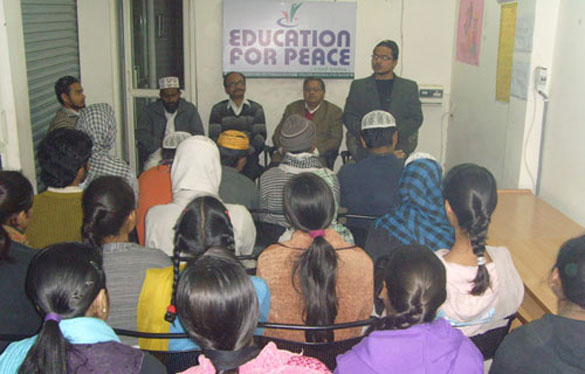 In his address, Mr. Ghulam Rasool Dehlvi apprised the audience of the Prophet’s core teachings of peace, tolerance, inclusiveness and love for the humanity. He said: “Islam is based on the three major foundations: knowledge, love and peace and all other precepts and practices of Islam are just manifestations of any of these three basic Islamic tenets.” He added that the greatest favour God bestowed upon the entire Ummah (including both Muslims and non-Muslims) is that “He raised amongst them His Beloved Prophet (PBUH) who took them out of ignorance, purified their souls and hearts, and provided them with spiritual guidance.”

Mr. Dehlvi continued: “the most redeeming feature of Islam, I believe, is that it is an all-inclusive religion. A Muslim is one who believes in God and all his books and messengers, without differentiating between any of them. One of the brightest aspects of the Prophet’s teachings is that he commanded his followers to accept all other prophets and divine scriptures revealed in different times.” To substantiate his point, Mr. Ghulam Rasool Dehlvi pointed to this Qur'anic verse: “All of them have believed in Allah and His angels and His books and His messengers, [saying], "We make no distinction between any of His messengers.”(2:285).

This unique and glorious aspect of Islam, Mr. Ghulam Rasool pointed out, is generally overlooked not only by non-Muslims but also by many adherents of Islam. In respect of faith, a Muslim is not allowed to pick or choose. Rather, he or she is entitled to accept and believe in each of God’s Prophets. He further said elaborating the major Islamic doctrine that mere lack of faith in any messenger of God is tantamount to heresy. “In other words, a Muslim who accepts only one or some Prophets of God is not a Muslim in the Qur’anic view”, he said.

He pointed to Prophets’ bond with one another and quoted one of the beautiful and, yet, most forgotten Hadiths (Prophetic sayings) in which the Prophet is reported to have said: "The prophets are paternal brothers, their mothers are different but their religion is one. Both in this world and in the hereafter, I am the nearest of all the people to Jesus, the son of Marry.” (Narrated by Imam Bukhari and Imam Muslim, the two most authentic compilations of Hadiths).

Mr. Dehlvi went on saying that the aforementioned Hadith remind us of the eternal divine fact that all the messengers of Allah, the Almighty are sent to mankind to disseminate the same sacred message; “God is only one” and thus, they all share a strong bond of fraternity and brotherhood in faith. The difference, if any, he expounded, was not in the core essence of their confession, but in its offshoots which are termed as Shari`ah in Islamic terminology.

In his concluding remarks, Mr. Dehlvi stressed that Islam honours all prophets and messengers of God and gives them equal amount of importance in terms of their basic message. We should retain this basic Islamic teaching to develop broader understanding of the pressing need for tolerance and mutual esteem among followers of different faiths, he said. 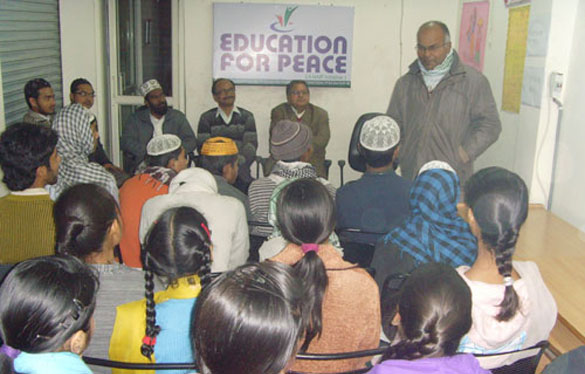 In this Milad Programme, the chief guest was Mr. Victor Edwin SJ, a Catholic Christian priest and a doctoral research scholar of Islamic studies in Jamia Millia Islamia, New Delhi. In his keynote address, Mr. Victor Edwin S J highlighted the beautiful and peaceful aspects of the Prophet Muhammad’s life and message. He enumerated some moving stories from the Prophet’s life in which he is reported to have shown abundant generosity and great respect to people of other faiths, especially Christians of Najran and Habsha. He also explained how gently Prophet Muhammad (peace be upon him) behaved with non-Muslims, regardless of their friends and foes. He presented some of the glorious examples of the Prophet’s humane behaviour with non-Muslims. One of them went like this: “when the Prophet was sitting with a group of his companions and a Jewish funeral passed by. The Prophet of Islam stood up to show his respect for the deceased. When some Muslims asked him as to why he stood up for the funeral of a Jew, who used to be an arch enemy of Islam, the Prophet replied: “Was this not a human soul?”

The event was organised by staff members of Education for Peace and the multilingual Islamic website NewAgeIslam.com, which are both initiatives of the New Age Islam Foundation. It was attended by the students of both madrasas and modern secular schools. They are learning English communication skills, personality development and computer education at the Education for Peace centre.

The program was chaired by the Managing Trustee of the Foundation Mr. Sultan Shahin, who is also Editor of NewAgeIslam.com. Mr. Shahin expressed his happiness at the presence of the chief guest Father Victor Edwin SJ. and expressed his appreciation for the fine points he had made in his speech regarding the prophet's personality and Islamic values of plurality and harmonious co-existence. He introduced the latter with the work that NewAgeIslam.com and Education for Peace are doing and presented him with a set of New Age Islam publications.