This year, the festival of colours celebrated by Hindu community and Shab-e-Barat, an important festival of Muslims two weeks before Ramadhan have coincidently fallen on the same day, 28th March. On the eve of Holi, Holikadahan (burning the effigy of Ravan) is held at night while on the night of Shab-e-Barat, Muslims worship and pray in mosques and visit the graves of their dead and offer Fatiha to their departed souls. Therefore, people will come out and gather in large numbers causing a possible spread of Covid-19 which has seen a surge recently. 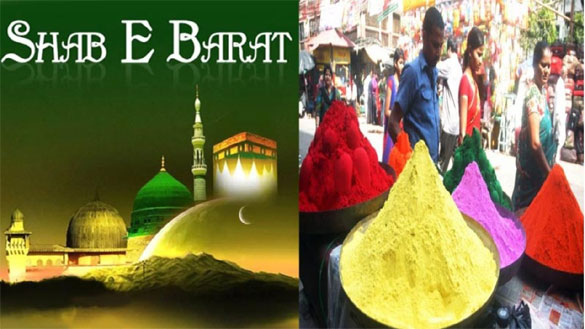 Since both the events are held at night, the administration has issued advisory for both the communities to prevent any untoward incident and to prevent the spread of the epidemic.

Although, people from both the communities observe these days peacefully and traditional bonhomie, there may be some unruly and rogue elements who may try to disturb the communal harmony. Keeping this in view, the government and religious leaders have issued the advisory.

It has advised the Hindu community to hold Holika Dahan by 9:30 PM instead of 12:30 as is usually done because Muslims go to their local mosques at night and also visit the graveyard.

The Muslims have been advised by their religious leaders that while going to the graveyard they should at best avoid the routes on which a Holi Dahan is being held. They have also been advised to pray at homes this year and after visiting the graveyard, return home early. Though firecrackers are prohibited in Islam, young people light firecrackers in Shab-e-Barat. They have been advised to obey Covid protocols: Wear masks, maintain distance and use hand sanitisers.

The religious leaders and the administration have advised them not to light firecrackers to avoid any untoward incident.

The religious leaders have also advised Muslims, particularly, the youth not to roam around on bikes at night as has become a common practice in the last few years. This may cause accidents or clashes between the two communities triggering a communal flare up.

In short, both the communities have been advised to observe maximum restraint and respect the sentiments of each other as they always do and turn this occasion into an opportunity for promoting intra-community harmony and strengthen the pluralistic sprit of the Indian society.