As a pluralist, I had a lot of questions about Prophet Muhammad before recognizing him as a peace maker and a mercy to mankind. I have been sceptical about the divine status accorded to religious masters in every tradition including Islam.

I wanted to understand the prophet as a human with whom I can relate, and critically review his contributions towards creating cohesive societies, where no individual had to live in apprehension and fear of the other. The book, Muhammad by Karen Armstrong was a great help in understanding the man and his decision making process geared to create peaceful societies, and have since come to love his work.

Prophet Muhammad (pbuh) is indeed a peacemaker and a mercy to mankind, and is one of my mentors along with Jesus Christ, Mahatma Gandhi, Martin Luther King Jr., Mother Teresa and my late father Abdul Rahman. Today, we have Pope Francis amidst us who is a blessing to carry out their work.

Sustaining peace and harmony in a given society hinges on justice and mercy, the qualities we ascribe to the creator. Indeed, if we sum up the work of Zarathustra, Moses, Krishna, Rama, Buddha, Mahavira, Confucius, Jesus, Muhammad, Nanak, Bahaullah, and other masters in native traditions, we clearly see the propagation of these twin values. They wanted to build societies where every human was free to pursue his life, liberty and happiness.

In Dallas, we celebrate the season of nonviolence between Jan. 30 and April 4 every year, and it is a period between the assassinations of Mahatma Gandhi and Martin Luther King Jr. Over the last few years we have added Prophet Muhammad as a peace maker, and Jesus as a pluralist to the talks.

Muslims around the world will be celebrating the 1444th birth celebrations of Prophet Muhammad (pbuh) on Jan. 14, 2014. He was born in Mecca, Hijaz, and now Saudi Arabia on 12th of Rabi ul Awwal, the third month of Islamic calendar which translates to the year 570 AD. The prophet was a simple man and did not want to celebrate his birthday, nor did he encourage anyone to do so. However, most Muslims celebrate it by singing Milaad Carols known as Naats and Nasheeds and celebrate his life.

Peace can be defined as a state of mind where one lives without apprehension, discomfort or fear of the other. Justice gives birth to peace, and when there is justice, a sense of security permeates in individuals and the societies.

A peacemaker is one who mitigates conflicts and nurtures good will and brings about a sustainable balance to the society. Indeed, Prophet Muhammad's life was an example of living the life of a peace maker.

I am pleased to present a few of the 15 key incidents from my speech. You have heard them all, but perhaps seeing it in a humanistic dimension for the first time. It is about what makes him a mercy to mankind.

The first model he created was to be Amin of the society; that is being just, truthful and trust worthy. A safe society to him was like mother's lap for the infants; safe, worry-free and secure.

Did Muslims call him the Amin? No, there were no Muslims at that time; it was the Pagans, Jews, Christians and others who called him Amin. We have to earn the trust among the people we live, no matter who they are. Indeed that is the first and foundational Sunnah (practice) to build peaceful societies.

God informs in Quran (49:13) that he created humanity from a single couple into multitudes of tribes, communities, nations, and conflicts were bound to happen with the given differences. Then he advises, the conflicts persist because we don't know each other. He asserts that the best one among you is the one who takes the time to know the neighbor. When you know each other conflicts fade and solutions emerge.

It is one of the first models of mitigating conflicts and nurturing goodwill. Aswad is a precious stone that Prophet Abraham had affixed in the wall of Kaaba, the cubical building in Mecca, around which Muslims circumambulate as a part of the Hajj rituals. Once, the stone came off the wall and created a huge problem -- it was considered sacred and each one of the dozen or so leaders of different traditions was fighting for his holy right to put the stone back in its place.

It was a raging conflict, and they decided to go to Muhammad knowing he would do the right thing. Indeed, prophet could have placed the stone himself or asked one of the elders of his tradition to do it, but being a peace maker, he saw this was going to be a model to mitigate conflicts and nurture goodwill between the leaders.

He called on them to join him, and laid a carpet on the floor and lifted the stone and placed it in the middle of the carpet. He then asked the leaders to stand around the carpet and lift it in unison.

Now imagine what was going on in their minds! Just a day before they were fighting with each other for exclusive rights, and here they are, facing each other, and participating together to set the stone back in its place. In one single act, the conflicts were mitigated and environment of goodwill was cultivated.

Just as Jesus and the other great masters had endured harassment, prophet Muhammad faced it as well. On his way to the City of Taif, he rested in a place with his associates. Out of nowhere a bunch of miscreants started pelting rocks at them and the prophet started bleeding. His associates were angry and ready to go and get the bad boys, but the prophet said no to them, then the arch angel Gabriel appeared and said, he would crush them all into pieces. Prophet held them all back.

Instead he turned the other cheek, simply meaning -- do not aggravate the conflict further, but find the solution. He knew violence begets violence and goodwill nurtures peace, so he prays for them with effective results. Mahatma Gandhi applied that principle effectively in his great Salt (Dandi) March.

If aggravated, small conflicts can flare up into major wars, but if mitigated peace is the outcome. Indeed, goodwill is sustainable.

Due to space limitations, I will end the article here and urge you, Muslims in particular to see the application of prophet's formula "mitigating conflicting and nurturing goodwill" in the following instances. If there is a demand for it, I will write the sequel.

Madinah Charter - It is one of the first pluralist constitutions of a state that offered freedom to practice ones faith. Each group was allowed to apply their own faith laws to their situation. Indeed, India's constitution is enriched with similar elements. It's a lesson for Muslim majority nations to follow.

Hudaibiyah - Prophet gave an example of learning to respect the otherness of other, one of the greatest examples that can be applied in peace making in most situations. Can you think of how valuable this is in peace negotiations?

Interfaith Dialogue - Muhammad (pbuh) was the first Human in history to have initiated an interfaith dialogue, and he showed tremendous respect for the otherness of others.

Humility - Treat no prophet above the other, it is one of the most powerful verses in Quran, and it is to prevent Muslims from believing that their prophet is superior and becoming arrogant.

Bilal - Honoring Bilal, the freed slave with a superior place in paradise was to remove the racial barriers. There is no room for prejudice of any kind in Islam; it is prejudice that destroys the social fabric of a society. However, like all faith groups, Muslims are guilty as well in not following the guidance to the fullest extent.

Women - Men and women are each other's garment, protector, supporter, respect and honor. He announced that women were free to marry, divorce, own property and business in a time when women were considered a chattel. He was a radical women's libber. Of course, just as some of us in West don't quite believe in equality of women, there are Muslims who do the same.

Equality Of Humans - Inculcating the values of equality through the prayers, fasting and other rituals of Islam. No one is superior to the others in the eyes of God.

Good Deed - What is a good deed? Prophet gives an example of planting a seed or sapling that will grow to be a tree and benefit the future wayfarers with a fruit or the shade.

Individual Responsibility - He told his daughter that she will have to earn a place in paradise through her own deeds, there is no nepotism, and you stand on your own. There is no free lunch.

The best way to honor the prophet is to follow him, and become a Rahmat (kind and just) to your spouse, kids, siblings, parents, family, friends, customers, clients, vendors and every human around you. And if others feel safe and secure with you, God and the prophet would be pleased with you. 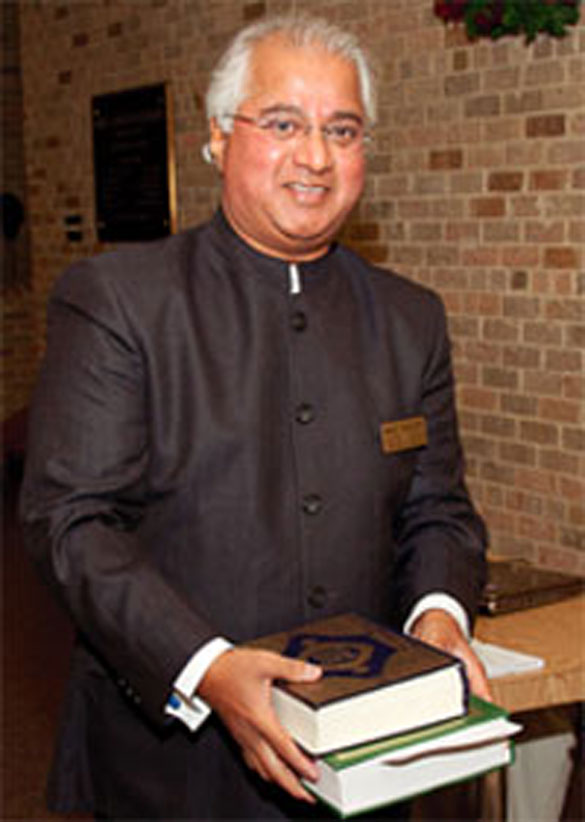 "Festivals of the World" is an educational series published by Mike Ghouse since 1993. When we live in the same communities as neighbors, we might as well learn about each other. The best way to build cohesive societies is for its members to participate in festivities as well as commemorations of each other, or at least understand each other's' joys and sorrows. Please note the simplicity in writing is designed for people of other faiths to learn and to know, so we can function cohesively. This is too elementary for the followers of the faith, but informational to those who are not aware of the tradition.

Mike Ghouse is a Muslim speaker and a pluralist.