Akbar the Great: The Monarch of Monarchs

The Emperor’s Writings: Memories of Akbar the Great 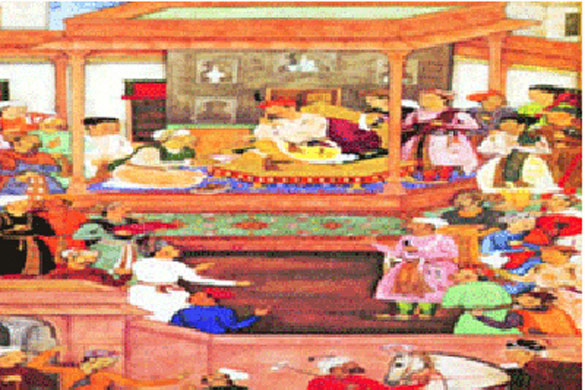 This is Belgian Dirk Collier’s first novel. He had set out to write an account of the Portuguese Inquisition of Goa and accidentally discovered that the then great Mughal, one Echber, had invited as many as three Jesuit missions to Agra to have discourses with them on Christianity. This discovery resulted in a growing obsession until he abandoned the Goa project and chose to write a book on the life of the great emperor. The work is an outstanding and deep act of empathy. Not only has Collier managed an extremely balanced, historically accurate and engaging novel on the famous ruler, he has also written a book deeply engaged with Islam and with the righteous notes of the Islamic past. Given that Collier lives in Europe, which has developed a violent antipathy to Islam, his achievement is even more singular.

The book is organised as a series of letters by Akbar to his son Salim who would ascend the throne as Jahangir. It is interspersed with memories and accounts of the two people Akbar was very close to, his wife Salima Sultan Begum and his teacher Mir Abdul Latif. The letters relate to Salim the account of his life, his upbringing, his ascent to the throne, his military victories and how he became Akbar-e Azam, Akbar the Great, the Mughal-e Azam of the famous film. Akbar was a legendary, if controversial, emperor even in his own time. Even while his courtier Abul Fazal was compiling the massive Akbarnama, the apotheosis of medieval historical writing, Mulla Badauni was writing his own secret history of Akbar’s reign called Muntakhab-ul Tawarikh. Since then, Akbar has been a role model for historians over centuries. He set the Imperial administrative machine that would serve India not only during the Mughal times but would prove to be a template even for the British rule. His death sparked a country wide mourning, leading to such scenes as a Hindu baniya in Mathura shedding copious tears at the death of his beloved monarch.

In the eighteenth century, chroniclers remembered him as the example of what a ruler of India should be and blamed Aurangzeb for departing from the path set by him. As historical writing in India took shape in the first half of the twentieth century he would become the monarch around whom a nation could build itself. Ecumenical, secular, brave, philosophical, just and an institution builder, Nehru’s Discovery of India and the Aligarh school of historians’ endeavors would coincide in finding the Indian nation and the Indian state coeval under him. Biographies of Akbar abounded in that period, from the Imperialist V.A. Smith to the exotic Flora Annie Steel to I.H. Qureshi, Mohammed Hussain Azad and Athar Ali and down to Irfan Habib and Muzaffar Alam in our times, Akbar and the Mughal state that he created have commanded a disproportionate amount of medieval historiography.

Indeed Akbar was an exceptional man and a unique ruler. A dyslexic who hated reading, he knew entire books by heart merely by having them read aloud. Physically he was so powerful that he would pounce on an elephant which had gone crazy, or mast, and box it into submission. He once marched from Agra to Gujarat, a usual journey of three months, in nine days, the mere sight of him made the ruler go prostrate on the ground. After Jahangir had been persuaded to give up his rebellion, towards the end of Akbar’s reign, and return to Agra, the first thing Akbar did was to drag him inside a room and beat him black and blue, when Jahangir was nearly 40 years old.

He could stand under the sun for hours doing the Surya Namaskar, he would often pray with his back to the Kaba rather than facing it, he turned vegetarian later on in life, he tried to ban child marriage and Sati and untouchability and earned the wrath of the mullahs by suggesting that all religions equally lead to God. He often joined his Rajput wives in their prayers, inside the Mughal harem. Thanks to him, at least three quarters of the Mughal blood had turned Rajput by the time Shah Jahan appeared on the scene.

When he proclaimed the Din-e-Ilahi, his attempt at a universal deism, and asked Man Singh whether he would take oath on that, the great Rajput is said to have responded, “My lord, I know only two religions, Hinduism and Islam, if you ask me to become a Muslim I will do so but I do not understand this third way!” That did not stop Akbar from instituting Sulh-e Kul, peace with all as the guiding force of his Empire. He ruled for nearly 50 years and spent at least 30 of those in conquest.

In all things he did he saw himself as a historical personage, standing at the end of a long line of adventurers, rulers and caliphs. Inspired by the stories of the legendary Abbasid Caliph Haroun Al Rashid, he would roam around his kingdom in disguise, getting the pulse of the people. On one such occasion when he was recognised, he turned up his eyes as if he was astigmatic and claimed to be a Rajput. Inspired by Amir Hamza, the Sahib Qiran, the Auspicious Ruler of the Age, he commissioned the most gigantic Mughal painting enterprise known to us, the Hamzanama. The long line of history, with Alexander and Timur and Chengiz and Babur, it was to climax in him and his achievements.

Indeed, he was the monarch of monarchs and the very acme of enlightenment. No wonder he has ever provided the role model for our secularism, a secularism that is as statist and government-heavy as it was under Akbar. No wonder K. Asif began his eponymous film on the Great Mughal with a map of India and a voice over by Hindustan, no less, which proclaims Akbar to be its greatest son. This is still the Nehruvian India and if there was a successor to Akbar it was another jewel-studded son, then ruling over us like an enlightened despot.

Collier’s fictional autobiography is competent on all these fronts. More than any other previous account it brings out the reflective, philosophical side of Akbar’s personality and shows us how the mighty Mughal Empire was built. Its only fault is that it sticks too closely to the sources and thus ends up giving us an Akbar that we have been familiar with, even though here he goes hunting with his wife and agonises over his possible infertility with a hakim. Collier is very scrupulous with his Arabic transliterations and gets almost everything right except his Urdu chapter headings which are occasionally misspelt. Readers would do well to combine this with the highly readable and slim Episodes in the Life of Akbar by Shireen Moosvi. The Emperor’s Writings is a solid, if occasionally stolid, piece of work. An exciting biography of Akbar, which can climb the bestsellers chart, is still awaited.

(Photo: Court of Akbar the Great)