Over the last few days there have been several articles bemoaning the destruction of the last standing synagogue in Java, which is one of the islands of Indonesia (south of Viet Nam, north of Australia, for the geographically challenged).

The story had a human interest news hook: six American university students were visiting Indonesia to learn about “pluralism and democracy.”  Oops.  Not only was the only synagogue on Java demolished, but it had already been sealed off in 2009 by Muslims who also burnt an Israeli flag in response to the conflict in Gaza, according to the Jakarta Globe. 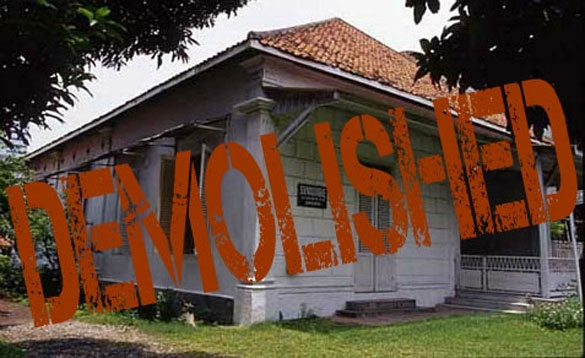 Surabaya Synagogue, the last Shul on Java, Indonesia, was demolished in May, 2013

The Jakarta Globe article quoted lecturers from a local university who claimed that the American students still learned one or two things about pluralism from the city.

“They learned about how the residents form a pluralist and democratic community,” said Diah Ariani Arimbi, dean of the Airlangga University School of Literature.

That sounds awfully odd.  But sadly enough, it may be true.

Indonesia has long been held up as one of the more tolerant Muslim countries, but in recent years there has been an increase in religious intolerance.  In February, Human Rights Watch reported that more than 400 churches had been shut down between 2005 and 2010. And since 2009 there has been a 55 percent increase in the number of provincial districts whose bylaws are based on Shariah, or Islamic political ideology.

This unfortunate trend has, paradoxically, been attributed to the political change in Indonesia from centralized, authoritarian rule to a country where there is increasing decentralization, and granting of local autonomy.  In other words, the increasing democratization is precisely what is driving the concomitant increase in intolerance and a reduced embrace of religious diversity.

This is hardly the lesson the academic advisers who helped develop the program the young American college students visiting Java expected would be taught.

That academic program was begun in 2011, and is under the auspices of US-Indonesia Partnership Program (USIPP) for Study Abroad Capacity.  The purpose of the program is to study religious plurality, democracy and multiculturalism directly within the community.

In an interview about the program last year, Professor Lloyd Steffen of Lehigh University said that, “’Religious Plurality, Democracy and Multiculturalism’ is its theme, and that participating students were expected to learn about how democracy contributes to peaceful and respectful religious diversity.”

Steffen explained that the program came out of an agreement signed between Indonesian President Susilo Bambang Yudhoyono and President Barack Obama, several years ago. “It’s all about friendship and collaboration. It’s about two countries getting to know one another better,” Steffen said.

He added the program was a great learning experience for participating students of both countries, in which Americans would find out more about Indonesia, Islam and other religions and how they operate in Indonesia. Indonesians, likewise, would learn more about the U.S.

The American students whose instructors thought they would learn one important lesson in political reality may have something very important – and far more difficult – to teach their own instructors.

Professor Steffen did not respond to an email query about the demolition of the Surabaya Synagogue.  The Jewish Press asked whether USIPP plan to incorporate the sad political reality that increasing democratization, at least in Indonesia, appears to be leading not to greater religious diversity, respect and tolerance, but to the opposite, instead.

Lori Lowenthal Marcus is the US correspondent for The Jewish Press. She is a recovered lawyer who previously practiced First Amendment law and taught in Philadelphia-area graduate and law schools.