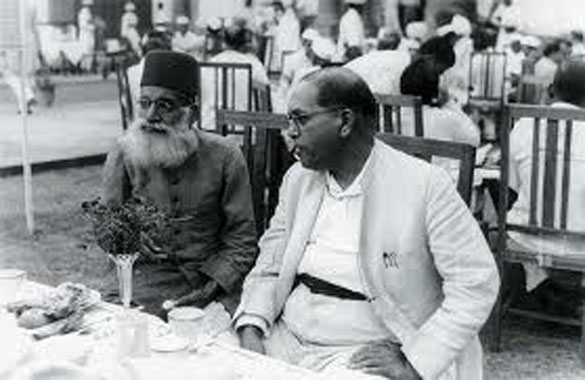 Hasrat Mohani with B.R. Ambedkar at Sardar Patel’s reception in 1949

Hasrat Mohani was not just a maverick when it came to publicly championing the radical thinking of Tilak. He also wrote verses expressing deep love for Krishna, and often went to Mathura to celebrate Janmashtami.

He was a true maverick. In 1908 he published an anonymous article in his modest Urdu journal, Urdū-e-Mu’allā (circulation 500), which severely criticized the British colonial policy in Egypt concerning education. The authorities in India promptly charged him with “sedition.” Refusing to disclose the name of the author, he took sole responsibility for the article; consequently, he had to spend over 12 months in “Rigorous Imprisonment”—i.e. hand-grinding with another “C” class prisoner one maund (37.3 kgs) of grain every day.

In 1921 three major political parties held their annual meetings in the same week at Ahmadabad. At the All India Khilafat Conference, he succeeded in getting a resolution passed that called for India’s total freedom from the colonial rule, but the next day, not surprisingly, the delegates quickly repudiated themselves. He then tried his luck in the Subjects Committee of the Indian National Congress, but the Mahatma, rushing back from another meeting, made sure the resolution was firmly defeated. Finally, at the meeting of the All India Muslim League, he forcefully expressed his call in his presidential address, but wisely abstained from asking for a vote.

He was perhaps the only prominent Muslim of his generation to publicly champion the radical thinking of Tilak, writing glowingly about him in his journal. He also wrote many verses praising him, including the following at his demise:

So long as he lived he ruled our hearts, and now in Paradise,

Nearer to God, Tilak shall rule over the Houris.

And when the first Indian Communist Conference was held at Kanpur in 1920, he was one of its organizers as well as the President of the Reception Committee. Some think that on that occasion he also coined the slogan, Inqilāb Zindabād, as a translation of the English, “Long Live the Revolution.” Later in a verse he described himself as a “Sufi Believer” (sūfī momin) and a “Communist Muslim” (ishtirākī Muslim), whose chosen path was Revolution (inqilāb) and Unworldliness (darweshī).

He was born Fazlul Hasan in 1878, in a modest zamindar family of Mohan, a qasbah in Unnao, U.P. After matriculating with distinction when he arrived at the Mahommedan Anglo-Oriental College, Aligarh, in 1899, he got down from the ekka wearing flared pajamas and his wedding sherwani, and holding a pāndān (“betel-leaf container”) in one hand. The smartly turned-out boys of the college immediately nicknamed him khālajān (“aunty”). But in short time his personal integrity and his talent for poetry—he chose Hasrat (“Longing”) for his takhallus—won him their affection and respect. By the time he passed away in 1953, most of India had long known him simply as Maulana Hasrat Mohani.

While still a teen Hasrat had been taken by his father to the Firangi Mahal in Lucknow to be initiated into the Qadiri silsilah, as traced through Shah Abdur Razzaq (d.1724) of Bansa (Barabanki, U.P.). He was also initiated into the Chishti Sabri silsilah, and eventually received authority to initiate others in both. He also went on Hajj eleven times, traveling by land or sea as his meagre funds allowed.

There was one more way in which Hasrat was a maverick: he wrote verses expressing deep love for Krishna, and often went to Mathura to celebrate Janmashtami.

Hasrat’s Kulliyāt (“collected works”) contains a small set of Krishna-bhakti poems. A few are in standard Urdu; the rest are in a language that he sometimes called Bhasha and other times Hindi, though written in the Urdu script. It is a kind of simplified Awadhi that was quite prevalent even in the Forties among the Muslim gentry of the qasbahs of Awadh—particularly among their ladies—who often called it kaccī bolī.

Hasrat’s radical speeches at the above-mentioned Ahmedabad conferences had brought him trouble. He was arrested early in 1922, and tried in Ahmedabad, and after conviction remained shut up in the Yeravada Central Jail, Pune, until March 1924. The Mahatma was also being held there, though in more luxurious quarters than Hasrat’s “C” Class cell. This time, however, Hasrat refused to perform hard labor, and consequently suffered other punishments.

As with his previous two times in jail, Hasrat wrote much poetry, precisely dating each poem as was his habit on such occasions. They were published as five separate small collections: dīwāns 6–10. One is struck by the intensity of their devotional fervor, particularly in those from the early months. In the poems written at Ahmedabad, Hasrat rejoiced at being in close proximity to the shrine of Shah Abdus Samad of Ahmedabad, the initiating mentor or pīr of his own particular spiritual mentor, Shah Abdur Razzaq of Bansa. One may safely assume he similarly rejoiced at being in Pune, the city of Tilak, his political mentor. Hasrat was at Pune when Janmashtami came around in 1923, and soon after it he wrote his first poem extolling Krishna; it also expressed his regret at not being at Mathura.

The poem—in Urdu—contains only three verses and bears the date: “September 26-30 [1923].” It is included in his 7th dīwān, which has an interesting introduction. Hasrat wrote: “These [32] ghazals were written in just eleven days, between September 20, 1923, and September 30, 1923.... I have occasionally mentioned in these verses the names of the saintly elders (buzurg) from whom I have received spiritual boons (faiz). In addition to Islamic personages I have also mentioned Sri Krishna. Concerning Hazrat Srī Krishna ‘Alaihi-Rahma (‘The Revered Sri Krishna, May Blessings be upon him.’), this faqīr follows the path of his pīr and the path of the pīr of all pīrs, Hazrat Sayyad Abdur Razzaq Bansawi, May Allah Bless his Innermost Heart.” Then he quoted a verse of his own:

The path of Love is to worship Beauty;

We don’t care for Reward or Punishment.

The three verses are:

When he cast at me his especially kind glance,

My eyes lit up with a nameless unending vision.

Revered Krishna, bestow something on me too,

For at your feet lies the entire realm of Love.

May that you accept Hasrat too at Mathura—

I hear you are especially kind to lovers.

In subsequent weeks, Hasrat wrote several more poems of that nature—but in “Bhasha.” The first is dated, “October 2, 1923.” Most likely it was not his first “Bhasha” poem. Another poem written that day must have been the first. It praises Shaikh Abdul Qadir Jilani of Baghdad, the founding figure of the Qadiri order of Sufism, and Hasrat’s own, more directly linked, spiritual masters of Firangi Mahal and Bansa. Since he was venturing into something new, Hasrat must have, I believe, first dedicated a poem in the new manner to the founding saint of his order and only then turned to praising another figure within his devotional pantheon.

The “new’ manner that Hasrat was venturing into was not just a matter of shifting from standard Urdu to “Bhasha.” There was another major change too. As we read the two poems, we immediately notice the vividly feminine persona—as distinct from the exclusively masculine voice in the Urdu Ghazali—that the poet adopts for himself. It strongly suggests that the choice in language really reflected a new—though only intermittent—preference in the manner or mode of devotion. In other words, “Bhasha” allowed him to relate to his object of devotion—Abdul Qadir Jilani; Krishna; Beauty; Truth—in a manner that his heart possibly longed for but found unavailable or impossible in standard Urdu. Here are the two poems.1

We poor ones too wish to get across.

How long must we gaze at the boat from afar?

Take us across; let us meet with the Beloved.

One is from Bansa, the other from Firangi Mahal—

Except for the beloved Razzaq and Wahhab,

There is none, Hasrat, who would hear our woes.

My heart has fallen in love with Kanhaiya.

Why would it think of anyone else now?

We looked for him in Gokul and Brindaban,

Let’s now go to Barsana and see if he’s there.

Hasrat, give up for him all that is yours,

Then go to Mathura and become a jogi.

A few more of Hasrat’s “Bhasha” poems are now listed in chronological order.

Nandalal keeps teasing me without end,

Lurking nearby, ready to pour colors on me.

Having safely sprayed others so many times,

He is now set in his bullying ways.

But what if I should embrace him, Hasrat,

And squeeze him dry of his fancy tricks?

Heartless Shyam has gone to another land,

Abandoning us, his wretched ones.

Why shouldn’t then we cast off everything

Loving Shyam is not a sin, nor a virtue,

So why do people go about Repenting?

How long must I burn in Love’s fire,

Silently, oppressing my heart and body?

He who is called the Wretched’s Solace

Who else would listen to me but you, Maharaj?

You once grabbed my arm—don’t shame me now.

Ever since that Braj-Enchanter entered my heart

I have neglected all my tasks.

He now seeks only the “Raj of Love.”

Whom should I tell I find no rest without Banawari?

My nights are spent shedding tears without Murari.

I try everything but my heart remains desolate;

No sleep comes to my eyes without Gridhari.

Look, friend, no one recognizes us—

So much we’ve changed, Hasrat, without Banawari.

Don’t throw color on me, Murari,

There he stands, with a loaded sprinkler.

As folks come over and watch.

Hasrat did not write another ‘Bhasha” poem after March 1924, but he did write a couple of more Urdu poems on the Krishna theme. Three verses from one will suffice to highlight the difference mentioned above. It was written at Barsana, the birthplace of Radha in Mathura district, and is dated: August 28, 1926. The date coincides with the Janmashtami festival that year.

I stand where Love’s perfect knowledge is found.

Whose is the flute whose melody fills me?

“Men of Heart” obtain in Mathura that fragrance of Unity

Which eternally permeates all life.

What good fortune, Hasrat, that your heart brims

With a glowing love for that Musk-hued Beauty!

We may conclude by reminding ourselves that Hasrat wrote no less passionately about Mecca, Madina, and Ajmer. What the different pilgrimages meant to him experientially is best expressed in one of his verses:

My eyes behold the mosque and the temple,

And light up every time with the Beloved’s Beauty.

And how he put that experience into practice in his life was also best expressed by him in another verse:

Take to your heart no lesson but one:

Serve all life, and love Truth.

Excerpted from a longer academic essay in progress. For biographical information, I am indebted to the following two books: