Pakistan: The Hindu Exodus Is A Fruit of Radicalisation, A Grim Reminder of Horrors of Partition

But what Malik seems to struggle to hide is the fact that Hindu migration is not a new phenomenon. It is that Islamabad seems to have noticed it just now. According to civil society and human rights activists in Sindh, there has been a slow and gradual move by Hindus to migrate from Pakistan. 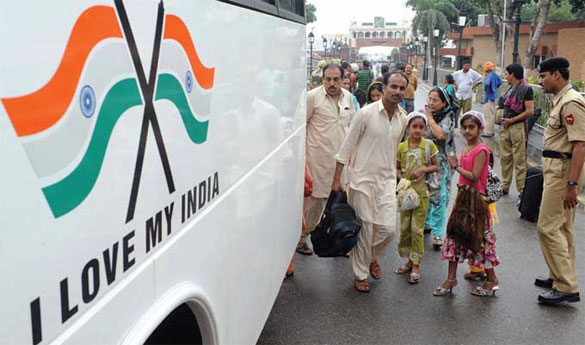 Life is elsewhere: Pakistani Hindu pilgrims arrive in India via the Wagah border, following reports of intimidation and conversion in the neighbouring country. Photo: AFP

According to one estimate, there are 4.5 million Hindus in Pakistan, most of whom are concentrated in Sindh, especially Hyderabad-Karachi, Tharparkat, Mithi, Mirpur Khas, Shikarpur and Sukkur. The more affluent ones tend to migrate legally. There is considerable illegal border crossing as well, but in such cases, people undertake the risk when they have surety of finding help on the other side. Most of the poor ones try to slip across the border under the pretext of yatra from which they do not return only if they find hope in staying back in India.

Sadly, Malik is loath to not only admit that Hindus are leaving Pakistan but also that the overall environment has turned unfavourable for religious minorities. According to a Christian activist, “There are times when people don’t want to share the same glass of water with us, so what to speak about the Hindus?” Perhaps, Malik has no option as he cannot admit that a lot of this discrimination is happening under the PPP government’s watch. The PPP may not be responsible for the gradual radicalisation of the society, which is spurred by the presence of the military’s jihadi partners, but the party leadership in Sindh has done nothing to dissuade its own powerful members from contributing to this human tragedy.

In Sindh, the PPP and other parties have a share in creating conditions that led to this migration. The fear of being forced to convert, abduction of daughters or other women in the family and their conversion to Islam under duress, or kidnap for ransom are some of the many reasons that have probably exhausted this group of Hindus to seek asylum elsewhere. The above-described fear is growing intense due to a combination of forces at play in Sindh province, which is the mainstay of a majority of the Hindu population in Pakistan.

In the past couple of decades, the militant forces in partnership with religious and non-religious political parties such as the PPP have managed to invade the Sindh province, which is generally associated with a Sufi culture. Some of the prominent PPP leaders in Sindh are instrumental in establishing Afghan villages or radical madrasas.

Then, there is the partnership between the PPP and the Jamiat-ulema-e-Islam - Fazulr Rehman group (JUI-F) that expanded the religious party’s influence in the province, which it used to provide support to a number of Deobandi militant groups such as the Lashkar-e-Jhangavi and Jaish-e-Mohammad. In any case, JUI-F and JUI-S (Maulana Samiul Haq group) have a noticeable presence in Sindh. The icing on the cake was done by the State itself, which encouraged numerous welfare outfits linked with the militant groups to assist the armed forces in search and rescue missions during the floods of 2010 and ’11. This means that now the Lashkar-e-Toiba and its welfare outfit, the Jamaat-ud-Dawa, have expanded and are operating in areas of Hindu population under the excuse of conducting welfare activities.

As I sat down to write this article, I was informed on Twitter that there was yet another case of a Hindu girl, Maneesha Kumari, who was abducted and later converted. A similar case had surfaced a few months ago in which Rinkle Kumari went through a similar experience. But such events are not new. It is unfortunate that minorities in South Asia have not felt safe as far as their faith or security is concerned. However, as some of the sources working closely on the Hindus of Sindh commented, the new development is that this has started to happen to the affluent Hindu families. This is a group of people who can afford to migrate to India or elsewhere. undergoing change on two counts. First, there is the empowerment and consolidation of religious and militant forces.

Second, there is a new emerging rural and urban middle-class in the province that does not necessarily share the ethos of the traditional feudal set-up that at least ensured the protection of the comparatively affluent members of the religious minorities. This new middle and upper middle-class is obsessively authoritarian and even fascist. Some like Mian Mithu use their power to extort greater influence and money. Mithu is politically aligned with the PPP and has tremendous political influence, a reason due to which the PPP and its leadership did not intervene to help the Hindu girls — Lata Kumari and Rinkle Kumari.

Mithu is one of the of the shrine of Bharchundi sharif, which gives him the social clout to coordinate abduction activities that are monetarily beneficial. Most importantly, he doesn’t seem to be under any pressure after the Supreme Court dispensed justice a few months ago by declaring the conversion of the Hindu girls as consensual.

It didn’t matter to the highest court of law that these girls were not allowed to meet their families and it were the abductors who had regular access to them before being presented before the court.

This migration of middle-class Hindus is also a barometer for the state of law and order in Pakistan. Some of the Hindus are of the opinion that they are being forced to leave because they can no longer pay to buy their safety and security. Indeed, cases of abductions for ransom has risen all over the country. The tragedy is that many cases are not even reported for the fear of the abductors killing the abductees. It naturally gets worse for the minorities who have to suffer a double whammy of torture and religious bias. As mentioned earlier, the departure of minorities is a phenomenal tragedy not just for the individuals in question but also for the societies that lose a lot of their life and multi-polarity. The migration of these Hindu families is also a painful reminder of the fact that South Asia, and certainly the sub-continent, has not had a closure to the wounds of 1947.

The brutality that happened then can repeat itself as States have clung to their two-nation theories. The cold-bloodedness with which some people are declared as “children of a lesser God” in their own lands may be justified by some theory of political realism, but such behaviour is indeed condemnable. States must not engage in the brutality of taking away lives and dreams of individuals.

We, in South Asia, badly need a closure to the horrors of 1947. Accommodating and treating with bonhomie the religious and ethnic minorities is perhaps one of the ways to do so.