He was born in Madinah (then Yathrib) in a Jewish family. He was a rich person and a good scholar of Torah. People considered him a rabbi. His name was Al-Hosayn ibn Salam. He was from one of the Jewish tribes known as Banu Qaynuqa, but later he became a companion of the Prophet (peace be upon him) from among the Ansars of Madinah. 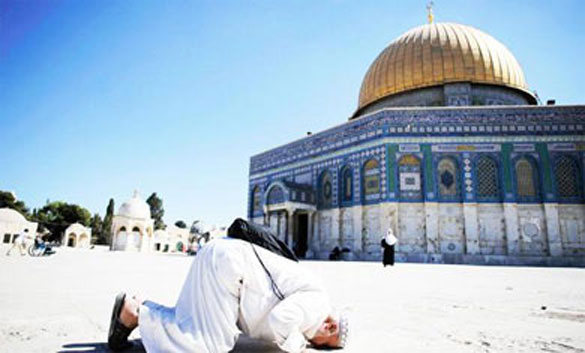 A Palestinian from Gaza prays in front of the Dome of the Rock during their visit at the compound known to Muslims as Noble Sanctuary and to Jews as Temple Mount in Jerusalem's Old City, in this October 5, 2014 photo. (Reuters)

He was a widely respected scholar of Torah. He read in Torah that a Prophet will be raised shortly who will complete the Divine Message of Prophet Moses (peace be upon him). He noted the signs of the coming Prophet and was eager to know more about him.

By the grace of Allah, news emerged from Makkah that Muhammad ibn Abdullah claims to be the Prophet of Allah. He took keen interest in the reports of his appearance and began to make inquiries about his name, his genealogy, his characteristics, his time of appearance and compared this information with what was contained in the Torah. He became fully convinced about the authenticity of Muhammad’s prophethood and was very eager to meet him.

When during migration the Prophet (peace be upon him) reached Madinah and stopped at Quba, the news spread across the town. At that moment, he was on a palm tree in his orchard. His aunt named, Khalidah bint Al-Harith, was sitting under the tree. On hearing the news, he exclaimed loudly: “Allahu Akbar!”

His aunt was surprised and said, “By God, if you had heard that Moses was coming, you would not have been so excited.” He replied, “By God he is really the ‘brother’ of Moses and follows his religion. He was sent with the same mission as Moses.” He rushed to meet him and after reaching his assembly found him the man of the same color and traits as defined in the text. He was overwhelmed with joy. He attended the assembly and heard the Prophet as saying:

the night, while people sleep...

and you enter Paradise in Peace...”

He looked at the Prophet closely and was convinced with his prophethood. He went closer to him and repeated the Shahada. The Prophet turned to him and asked: “What is your name?” He replied, “Al-Hosayn ibn Salam.” The Prophet (peace be upon him) said, “From now on, you are Abdullah ibn Salam.”

Abdullah returned home and introduced Islam to his family, including his aunt, Khalidah, who was an old lady. They all willingly accepted their new faith and kept it secret.

Abdullah ibn Salam was a very intelligent person who knew the nature of his community. He devised a plan to declare his new faith. He went to the Holy Prophet and told him about it.

The Prophet agreed and invited prominent Jews to visit him. He kept Abdullah hidden in one of his rooms. Then the Prophet (peace be upon him) introduced Islam to them and asked them to accept it but they did not respond positively.

Then he asked them, “What is the status of Al-Hosayn ibn Salam among you?” They replied, “He is our leader and our rabbi.”

The Prophet (peace be upon him) asked, “If you come to know that he has accepted Islam, would you accept Islam also?” They said unanimously, “God forbid! He would not accept Islam. May God protect him from accepting Islam.”

At this point, Abdullah ibn Salam came out from the room and announced: “O, The assembly of Jews! Be conscious of God and accept what Muhammad has brought. By God, you certainly know that he is the Messenger of God and you can find prophecies about him and mention of his name and characteristics in your Torah. I for my part declare that he is the true Messenger of God...”

They shouted, “You are a liar. By God, you are evil and ignorant, the son of an evil and ignorant person.” Abdullah, however, succeeded in declaring his Islam to the elite of his community.

Abdullah ibn Salam had a very high position among the Muslims. It is reported in a Hadith, that one day while the Prophet (peace be upon him) was sitting with his companions, he said, “Do you want to see a man walking on Earth and in Paradise?” Each one of the companions looked in silence toward the Prophet. The Prophet pointed toward Abdullah ibn Salam.

It is also reported that the Qur’an mentions about him:

Say, “Have you considered: If the Qur’an was from Allah, and you disbelieved in it while a witness from the Children of Israel has testified to something similar and believed while you were arrogant... ?” Indeed, Allah does not guide the wrongdoing people. (Qur’an 46:10)

Tafsir Al-Jalalayn mentions that the “witness” the verse refers to is Abdullah ibn Salam.

Abdullah ibn Salam participated in the conquest of Syria and Palestine and visited Jabia with Caliph Omar. He died in 43 AH in Madinah.