Myanmar Coup: What Goes Around Comes Around

There is a famous adage: What goes around comes around. This defines best the current situation in Myanmar where the Tatmadaw ( army) staged a coup on the 1st February this year and dissolved the Parliament. The army put Aung San Suu Kyi and other leaders in custody in undisclosed locations. The coup came about three months after the general elections were held in which Suu Kyi's party NLD won by overwhelming majority. The growing popularity of Suu Kyi made the army shaky about their hold on the government. They sniffed that she was planning to bring major amendments in the constitution to oust the military from decision making position. According to the 2008 Constitution, 25% seats of Parliament are reserved for Tatmadaw. The Constitution also reserves 3 ministries--- Home, Defence and Border Affairs --- for the military. After winning with more than the required number, Suu Kyi was firmly placed in the government but the constitutional hold of Tatmadaw on the government kept her finding a way to bring reforms. Perhaps the army got the hint and staged the coup well before she could act. 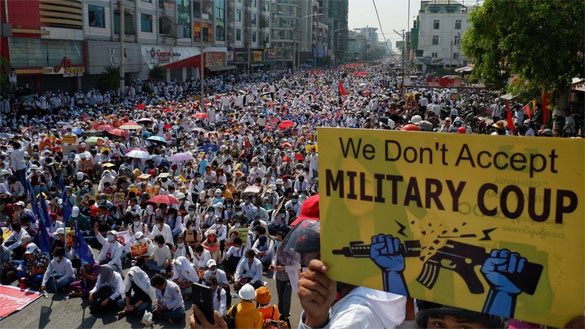 The coup came as a big jolt not only to Suu Kyi's party but also to the people of Myanmar. They had enjoyed the years of democracy since 2015 when the first elections were held and Suu Kyi was released from 20 years' confinement. Her party won the elections and she came to power.

The people could not accept the coup and came out on the streets to protest against the military. The military crushed the protests with brute force More than 400 people including one year old children were killed by the army. They have been given order to shoof people on the head and back. On 27th March, 90 people were killed in one day.

It was the same Myanmarese army that brutally killed Rohingya Muslims from November 2016 to January 2017. The local Buddhist monks and ordinary people assisted the military in the biggest genocide of the modern times in which 24000 Rohingyas were killed and more than one million Muslims had to flee to Bangladesh. Suu Kyi had not shown any remorse nor had the Myanmarese people, the Buddhist majority shown any remorse over the killing of the Rohingyas. On the contrary, prior to the planned attacks on Rohingyas, Suu Kyi had attended a secret meeting with the military and Buddhist monks in Rakhine state. Myanmarese majority community had overtly or covertly praised the military for the genocide of the Rohingyas.

When Gambia had brought charges of genocide of Rohingyas against Myanmar's military and Suu Kyi's government in the International Court of Justice, Aung San Suu Kyi had shemelessly defended her military against the charges of genocide and said that the military may have used disproportionate force against Rohingyas but it did not prove they wanted to wipe out the Rohingya community. To this, the whole Buddhist majority of Myanmar rejoiced in jubilation. Suu Kyi and the Myanmar army became their hero. They forgot the fact that it was the same military that regularly killed the ethnic Buddhists of Rakhine state where the Arakan Army of ethnic Buddhists fights against the army and the government for regional autonomy. Just before the genocide in November 2016, the Myanmar army had killed many Buddhists in October. They also forgot that Suu Kyi's government and the army did not hold elections in Rakhine and Kachin states and some other ethnic majority areas at the pretext of Covid and insurgency. They were happy over the fact that the Election Commission had barred Rohingya Muslim candidates from elections.

The world knows that the Muslims all over the world had expressed their solidarity with Suu Kyi when she was in confinement. They had protested against her incarceration and had demanded her release. They had expressed joy and relief when she was released. But after her release and rise to power, she forgot all that and became a prisoner of her own narrow religious and ethnic bias, so much so that she joined the conspiracy to slaughter Rohingya Muslims.

Today when Suu Kyi is in detention by the same military she assisted in genocide of Rohingyas, there is no sympathy for her in the world community, more so among the Muslims. While the killing of protesters including infants by the army is painful and condemnable, it may remind the Myanmerese people of the pain the Rohingyas went through four years ago. Even superpowers like Russia and China are supporting Myanmar's military and may veto any resolution against Myanmar's army in the UN. Therefore. Suu Kyi may pass the remaining part of her life in confinement in the same way she caused the Rohingyas to pass their days in confinement. This time no one will shed tears for her. Surely, what goes around comes around.