In Bangladesh, India and Pakistan, Madrasa Students Are Beaten and Tortured

2. In Pakistan, sometimes students even die due to severe torture.

3. Clerics say tgey beat the students to drive the devil away from student's body.

4. In India, making the student a murgha, is the lightest punishment.

5. Islam does not support such barbaric and inhuman practices. 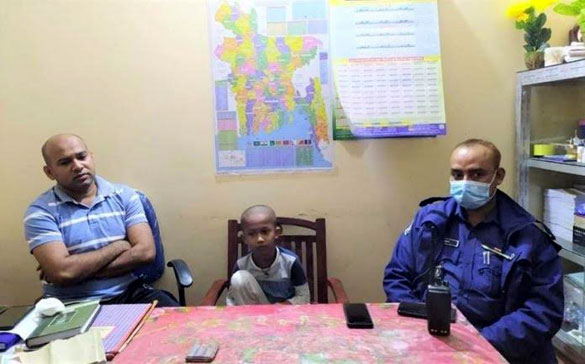 On March 10, this year a viral video of a madrasa teacher of Bangladesh merciless beating an 8 year old student stirred the collective conscience of the people of Bangladesh. The video was so heart-wrenching that right from the local authorities to the High Court in Dhaka could not remain silent. People demanded exemplary punishment to the heartless teacher.

8 year old Yasin was studying in a residential madrasa established by one Yahya in Hathazari of Chittagong. On the evening of 10 March, Yasin's mother came to see her child on his birthday and brought gifts for him. But when she left, the boy committed the sin of running after her out of madrasa as children often do when parents leave the children. This angered the teacher. He dragged Yasin back to madrasa and threw him on the ground and started beating him mercilessly and hitting him all over his body with a cane while the child screamed in pain and cried out for help. An outsider filmed the entire episode and posted the video on the internet. The video went viral and created severe outrage not only in Bangladesh but also in India and Pakistan. The local police took notice and detained the teacher and rescued the child from the madrasa.

The Deputy Attorney General ABM Abdullah Al Mahmood Bashar drew the attention of the Dhaka High Court towards the incident. The Court directed the district authorities to provide medical treatment to the child and ensure safety to his parents. The Court also asked the authorities what actions they had taken.

Initially, the parents did not want to pursue a case against the teacher for the sake of the future of their child. Even the mobile court did not give him any punishment and the teacher was released only on a written undertaking. But later under pressure and assurance of safety from the district authorities, the child's father lodged an FIR and the teacher was arrested. He was removed from the madrasa and barred from teaching in any madrasa in Chittagong.

This was not an isolated incident. On March 18, another incident of barbaric treatment to a minor student Mishkat by a madrasa teacher in Chattogram came to light. A 21 year old madrasa teacher Md Kawsar beat Mishkat ruthlessly for no fault. The boy suffered bruises on his body. The teacher was arrested at the complaint of their parents. In March itself, a third incident of student beating came to light in Chattogram. The teacher was arrested.

These are some of the incidents of inhuman treatment meted out to minor madrasa students in Bangladesh. In most of the madrasas, beating and psychological torture is the norm.

In Bangladesh, establishing a Qaumi madrasa is an easy way of earning a livelihood. In most of these madrasas, underqualified men join the job of teaching. They rope local Awami League leaders in the managing committee to escape legal and social accountability. The parents do not dare to say anything against such teachers and organisers of madrasas. This is one of the reasons that madrasa teachers behave aggressively in Bangladesh.

In 2011, after a series of brutal treatment to madrasa students by teachers, the government banned corporal punishment in educational institutions and the current Draft Education Act seeks to put an end to corporal punishment and psychological torture to students.

But going by these current incidents, it appears that the madrasas consider themselves above law and madrasa teachers continue to treat the minor students like animals.

In 2013, Bangladesh Bureau of Statistics and UNICEF had conducted a survey which revealed that 80% of students suffered physical and mental torture in madrasas and 24% students under the age of 14 suffered brutal beating like Yasin. The reason for this is that most of the madrasa students belong to poor families and so their parents can't raise their voice against tbe erring teachers. The political connections of madrasa owners and teachers also act as a deterrent.

The Second reason is that most of the parents think that teachers have the right to beat students. This attitude has also contributed to current situation. Thus, beating and severe physical punishment has become an accepted tradition among the Muslims of the subcontinent.

Such physical punishments sometimes lead to suicide. Some students run away from madrasas and give up education for the fear of physical torture. A boy named Tahir had enrolled in a madrasa for Hifz course. His dream was to become a hafiz. But due to continuous torture by the clerics, he ran away from the madrasa and gave up his education.

The government of Pakistan has banned corporal punishment in schools but it could not implement the law in the madrasas due to opposition from the clergy.

The physical and mental torture leaves a lifelong negative impact on the personality of students.

In India, though cases of brutal torture or death due to beating are not reported but still beating and physical punishment is a reality in these madrasas too.

Interestingly, the madrasa clerics give a bizarre and irrational argument in favour of beating. They say that when a boy enrols for religious education in a madrasa, the devil (satan) obstructs his learning. Therefore, physical punishment is necessary to rid the child of the evil influence of Satan. The teachers believe that they beat the devil out of the child.

This argument does not have a basis either in the Quran or in hadith. In fact this idea is satanic. Satan has put this idea in the mind of the clerics to make them commit the heinous sin of torturing innocent children and scaring them away from.madrasas so that they can't receive the knowledge of Quran and Hadith.

Islam provides for an amicable atmosphere of learning and a teacher-student relationship based on respect and affection. But to the contrary, the atmosphere in madrasas generally is of fear and hate. What respect will Yasin or Mishkat have for their teachers when they grow up?