Migration of Animals to greener pastures is a natural phenomenon. Many species of animals in millions migrate from one hemisphere to the otherin search of greener pastures and suitable breeding grounds.

Humans too have been crossing, and tracking across continents and paddling across seas in boats since creation, but mainly for rich picking, pillage and plunder or escaping from human predators.

Moses and his people, opperesed by the Pharaoh of Egypt tracked to the Levant, ‘the promised land’; and left behind a legacy of oppression and strife till today.

The early Muslim too have done their bit to this process.

The Americas have seen the largest migration of Europeans in modern history. From religious strife torn Europe, in boat loads. Followed by the conquistadores and colonisers.

There the newly arrived proliferated; like the introduced rabbits and cane toads of Australia. But all this at the expense of the native species’ virtual annihilation. New Zealand too, at a lesser degree falls in this category.

And yet it is the Chinese and Indians who are generally blamed for over populating the planet earth. The fact that even if they did, it was done within their own boarders!

The colonial era was no different. Colonial masters, for example the British took labourers in ship loads from India to Fiji and many other colonies, to grow sugar cane and for other hard labour requirements; often overwhelming the local population, as is the case in Fiji, causing yet another strife torn situation there till today.

Slaves, both males and females from Africa to Caribbean Islands and Americas too.

South sea Islanders were shipped to Australia to grow sugar cane; an industry which according to one artcle says:

·         “The Australian sugar industry - today worth $2 billion in exports - was built quite literally off the backs of their blood, sweat and tears yet few know the suffering and atrocities that occurred 150 years ago”.

Rich picking to be harvested with human migration and tales of suffering and misery. 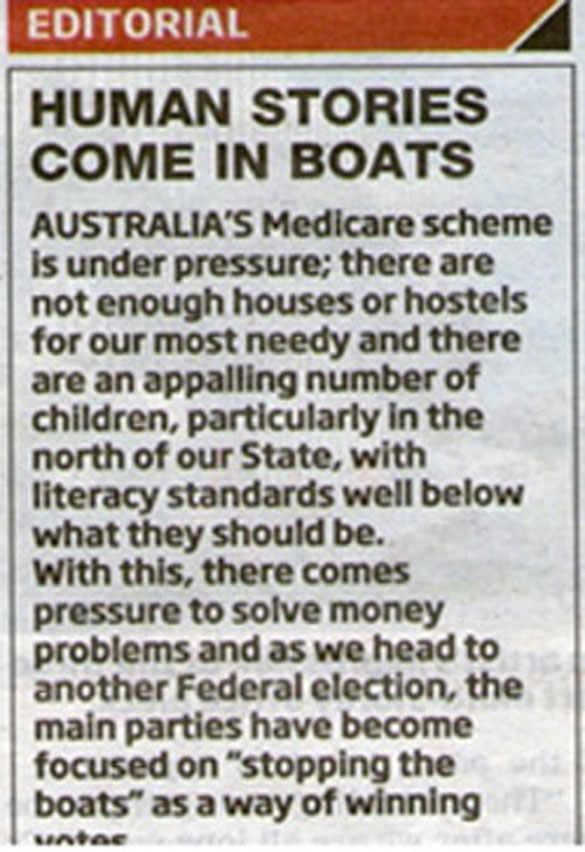 The Federal General Election in Australia that took place recently showed very clearly that one of the issues debated across all political divide was the issue of asylum seekers and refugees- the boat people, arriving in boats— euphemism for Indonesian leaky rusty bath-tubs or rickety fishing vessels!

But those with where with all come comfortably in aeroplanes and at much lesser expense and risk. In fact they hugely outnumber the Boat people! Amongst them are visitors, the so called “visa over stayers” from first world too and other categories, in droves, though they are no cause for concern! As one commentator on an article on this subject in national media expressed:

Annabel, I don't care what they do, as long as the boats, the false student visas and those other uninvited parasites who come in through the airports are stopped.”

In the context of Australia, Boat peoples’ arrival has for decades now been a cause for concern. Every conceivable aspect relating to refugees have touched the nation’s psyche. But the political party which put out the statement that “we will stop the boats”, crossed the finish line as a clear winner. 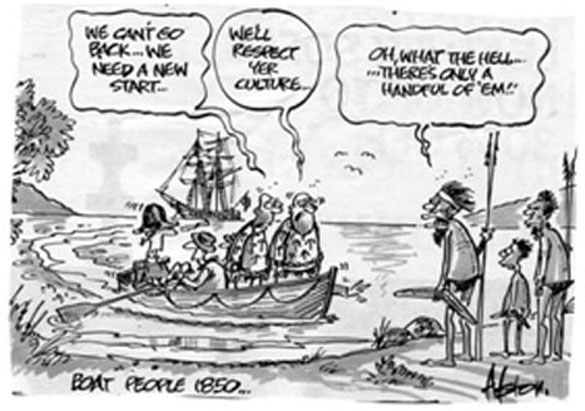 This sketch is equally valid for all boat people!

What has been totally ignored in the whole issue across the world is the debate on the conditions of the source-countries whence these wretched and desperate boat people come. Also referred to as the illegal immigrants, for they often present themselves with no documents to prove their identity, except for naming the troubled countries where they come from!

USA and Europe too is not spared of arrivals of refugees and asylum seekers from the third world- the push out countries, in various risky modes of transport.

“Leanne Weber a researcher at Monash University – Melbourne says “Deaths from those sea voyages to Europe are much greater than from attempts to reach Australia”!

A new term in the debate called the “Turn Back “policy that is, turn the boats back out of Australian waters; has emerged. However one Diplomat from the top of the list push-out country “has voiced his concern” over this policy!

The push-out countries presently are all those countries which are ravaged by war and are strife torn. Civil wars with religious and ethnic conflicts thrown in for good measure. There is hardly any country west of Australia that is not in this unfortunate situation.

Few decades ago such countries were largely on the North and East of Australia and New Zealand. Vietnam was on top of the list then; and don’t we know why?

It is then worth considering as to what are or were the common forces that act as the “push-factors” for people to seek refuge in an alien country– the promised land--and at great risk to life and limb?

One does not have to be a analyst of any sort to realise that apart from the “pull factor” of riches, the social welfare system and the security that exists in the social democratic countries, but also other issues are at play that force people out of their birth countries to abandon their homes and hearths, at such an unimaginable high risk and costs.

But for a lay person, some reasons -the push factors- are obvious. But the analysts list them politely in journalistic correct language, so as not to offend the Representative Excellences.

Top of the list is the violence and danger to life. As a result of wars, both kindled externally and for national strategies and internally fanned for political, military, economic and vested interests. For which the instigators are rewarded with dubious honourable prizes.

Secondly, the leaders and elites of all sorts there are greedy, callous and corrupt that they hire and sell themselves to the Masters, and at the heavy costs of destruction of their own countries, both in term of lives and infrastructure.

Thirdly, the masses there are educationally, economically and knowledge-wise ill-equipped, to understand that the promotion of the conflicts amongst them is never done for their benefit but for the masters’.

The foreign entrepreneurs of ‘rent a crowd’ take full advantage of this weakness. They sell their guns and war-wares to all sides of the divide. A win-win situation exists for the armament industry.

Fourthly, the “The people smugglers”, the so called human transporters of the high seas! Their marketing of destination countries is professional. Brochures depicting luxury hostels for migrants; bikini clad swimmers in azure swimming pools, social welfare and free education and health services!

To the shame of it all are the push countries, with their mixed bag of so called “values”, both national cultural, religious and individual!

There the rich individuals are so rich that they hold billion dollars’ worth of properties in foreign lands. Their extravagant life-styles, both at home and abroad makes the foreigners wonder as to why then are the people there so poor and destitute that their farmers kill their families and then themselves, because they cannot feed them. Many families survive from hand to mouth by what their children scavenge from the towns rubbish tips!

It is often said that it is in ‘the poorest countries where the richest people live’!

Corruption in these countries even at ground level is so rife that a tourist has to bribe ticket clerks to buy ‘first class’ train tickets for the privilege to travel in their country.

Law and order is blatantly on-existent there.

Politicians and the Elite have immunity from it while they are in office. And before their official term expires they and their families are safely tucked away in their Master’s countries, where they had hoarded their ill-gotten wealth.

What is more, they are farewelled in the brazen din of trumpets and fanfare by those who take their places; often recycled from previous governments. Unless of course, the incumbent falls out of the Master’s favours; then the billions in secret bank accounts are ‘frozen’ for good, to the detriment of the poor countries!

Yet the pushes out countries generally are taken as religious and spiritual. There are houses of worship -churches- within stone throw of each other, as compared to the receiving end so called godless infidel countries where most of them flock to!

Where then would one put the accusing finger, so as to point the flaw in the world systems that are the cause of human shame that has caused the Boat People tragedy?

Are the powerful countries to blame which overtly and covertly, instigate wars and conflicts in third world countries for their strategic interests? Are they also to be blamed for militarily propping up for decades the corrupt regimes, giving them massive “foreign aid” which never reaches the poor and always ends up back in the donor countries’ in secret bank accounts? Is that what is called ‘giving without giving’?

Or essentially, are the authorities in third world countries to blame, for their deliberate policies of keeping the populace poor, illiterate and embroiled in religious and ethnic strife?

Is their own morality at such low ebb as to have chocked and silenced their conscience—the inner voice – stopping them from doing what they pledged to do when taking oath of office with the right hand holding the holy books?

Are the various churches and their operatives in those countries to be blamed for causing the ethnic and religious strife?

Or most importantly, are the third world people themselves so naïve and gullible that they are unaware of what is being done to them in these games?

It appears that except the Boat People and Asylum Seekers; for they are the pitiable victims, all those others involved have dead conscience and bloodstained hands!

But then it could be said that today’s so called first world, centuries ago had done their bit in cross-pollinating human species and now it is the turn of the third world to contribute to the process. As one young brown comedian has far sightedly insinuated and named his comedy show as “Legally Brown”.

A regular contributor to New Age Islam, Rashid Samnakay is an Indian-origin Engineer (Retd.) based in Australia for over forty years.