Presenting the Spiritual and Moderate Narrative of Islam is the Pressing Need Of Today: Islamic Scholars and Ulema Assert in Delhi 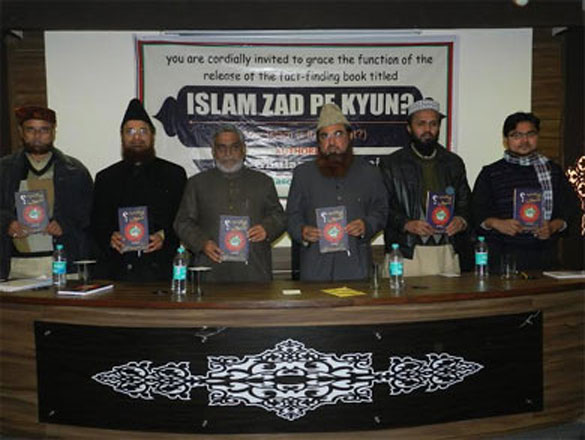 The function of releasing a soul-searching and fact-finding book in Urdu on Islam and contemporary issues titled “Islam Zad Pe Kyun?” (Why Islam is the Target?) was held at India Islamic Cultural Centre, New Delhi last night on December 22, 2014. With glimpses from the historical instances of peace-making and maintaining justice in the Islamic history, the contents in the book range from resolving social and cultural issues to the methods of dealing with moral degradation by applying theological edicts enshrined in the Qur’an and Prophetic traditions. In a nutshell, the book is an instructive appeal to the present-day Muslims to concern themselves with the universal values and essential messages of Islam: protection of human dignity and rights, establishment of global peace and justice, maintenance of law and order, regeneration of moral and ethical values, elimination of widespread social evils and vices, equilibrium of economic conditions, moderation and balance in actions, thoughts and life styles.

The final chapter of the book is an illustration of the philosophy of war and punishment in Islam. It aims at disassociating the doctrine of jihad with terrorism and wanton killing of civilians. The book also brings into discussion many other major contemporary issues to be sagaciously dealt with, in full synergy with the holy Quran and Prophetic traditions.

The inaugural speech was delivered by the New Age Islam Columnist Mr. Ghulam Rasool Dehlvi. He said that “Islam is going through a very difficult phase at the moment. A religion which is professed and practiced as a complete code of life by millions today is constantly conflated in the media with terrorism, violence, extremism, misogyny and intolerance. But the divine scriptural pronouncement remains unchanged in the Qur’an asserting that Islam does not allow resorting to any coercive, aggressive or violent efforts in matters of religion (Surat Al-Baqarah: 256).

Mr. Dehlvi also lamented the creeping radicalism in the Muslim countries. He said that this phenomenon has baffled the peace-loving mainstream Muslims who profess and practice Islam as a spiritual path to salvation, rather than a political ideology. He continued: “Majority of Muslims strongly believe that the ultimate solution to the multifaceted issues of modern era lies in preaching tolerance, nonviolence, brotherhood, equality and love. And these are the spiritual foundations which Islam is based on. For many years, the Muslim world has been enduring diverse forms of terrorism, oppression and brutal wars; therefore, we believe that the spiritual narrative of Islam is the only effective and successful counter to deal with all these problems and tribulations.”

“In this context, he added, it is quite heartening to catch up with a seminal work recently authored by Dr. Ghulam Zarqani, Professor Lone Star Collogue, Houston, USA, a noted Islamic scholar, versatile activist and a prolific writer with a sizeable readership. Mr. Dehlvi said that Dr. Zarqani has done a gigantic task of dealing with contemporary issues in the light of the Islamic principles, Qur’anic injunctions, Prophetic traditions, discourses of the early Muslim scholars, sermons of imams and other substantial Islamic sources, with renewed spirit and well-suited relevance.

The key-note address was given by Mr. Akhtarul Wasey, a professor of Islamic Studies at Jamia Millia Islamia in New Delhi who is currently working as National Commissioner for Linguistic Minorities. He said that “Islam is the religion of irfan (mysticism and spirituality) rather than siyasat (politics). But it is appalling to see the extent of defamation and degradation where Muslims have taken Islam to. They have given a completely erroneous impression of Islam to the non-Muslim neighbours living with them.” He added saying that “Muslims need to adopt the path of Sufis and mystics who did no discrimination among human beings on the basis of faith, caste, colour, region or sect”.

Mr. Wasey raised a question: “since we are in minority in India, we Muslims often complain about being deprived of our basic rights, but what about the Muslim majority countries where we are not willing to give the rights to the minorities?” He stated that democracy is one of the foundational principles of Islam which was fully institutionalized in the rightly-guided years of early Islam before fifteen hundred years ago. “And hence it must not be discarded in today’s Muslim world too”.

Mr. Wasey said that he completely endorses the views expressed in the book titled “Why Islam is the Target?” “Dr. Zarqani has presented -in this book – the real face of Islam- based on peace, justice, love, compassion, tolerance and co-existence. He dispels the notion that Islam is a religion of violence, a notion that has gained currency in the present times, because of Islam being misrepresented and therefore misunderstood. He deals at great length in this book with issues relating to modern age”, said Mr. Wasey.

Mr. Syed Babar Ashraf, noted Sunni activist and national secretary, All India Ulama & Mashaikh Board said that “declaring the brutal civil wars in the Muslim countries as “Jihad” is the greatest defamation of Islam and Muslims.” He further said that the Egyptian citizens realised that Salafism was an attack on Islam and humanity and, therefore, they overthrew the Muslim Brotherhood regime.” He also praised the world renowned Islamic university Jam’e Al Azhar for keeping the Sufi tradition of Islam intact in Egypt.

Mufti Mukarram Ahmad, Shahi Imam Masjid Fatahpuri made a few remarks about the book as well as the author. He said that “the book, indeed, should be seen as a welcome sign of moving forward and not remaining stagnant to the obsolete ways of preaching and unnecessarily emotional methods that most of traditional Islamic clerics and scholars and even televangelists are accustomed to.” He further said that the book seemed to him a result of the author’s constant quest and research in both classical Islamic sciences and modern studies. “I strongly feel the need to present broader Islamic teachings in full synergy with the modern times much in the same way as Dr. Zarqani did”, said the Shahi Imam.

The program started with the beautiful recital of the Qur’anic verses that stress the importance of efforts for peace-making in Islam.