Sheikh Abu Mohammad used to be an officer in a state institution considered by many Syrians to be the regime's most notorious and feared: the air force intelligence department. 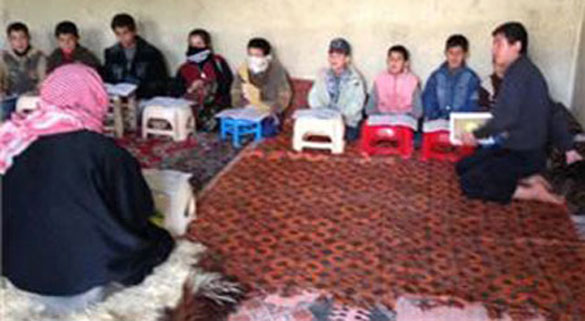 The classes last one hour every day [Basma Atassi/Al Jazeera]

A year into the uprising, however, Abu Mohammed said he could no longer tolerate the scenes of brutality he witnessed on the grounds of the headquarters in Damascus.

Anti-government protesters were frequently arrested and tortured there before they were tucked into narrow and dark dungeons, he said.

Eight months ago, Abu Mohammad, in his forties, gathered enough courage to leave his job. He said the tipping point for him was when he saw an imam being tortured in front of his eyes.

"They stepped on his beard," he said. "They humiliated him and continued to insult him and his religion.

"I was working in the administration of the air force intelligence and was not involved in running prisons or torturing detainees. But I could no longer live with myself watching atrocities in the front yard every day.

"Images from there continue to haunt me."

He fled the capital and returned to his northern hometown of Hantoutin. There, he traded his uniform for a long, white robe. He decided to pursue a long-time dream: teaching Islam to children.

He set up a prayer room and seating area in an intact part of a local mosque that had been mostly destroyed by government air strikes.

Today, children enter the mosque through holes in its bombarded walls and stumble through the debris to reach the room where Abu Mohammad provides Quran recitation sessions and teaches them Islamic principles for one hour each day.

"This is something I always wanted to do," he said. "Three years ago, while still in office, I earned a diploma in Quranic recitation and enrolled myself in religious lessons, secretly. If the regime knew I was involved in religious studies, I would have been harassed or even arrested."

The Syrian regime has for decades prided itself of being a secular bastion in the Arab world. It has been cracking down on Islamists and tightened its influence over religious education.

Abu Mohammad said the uprising against President Bashar al-Assad gave him the push he needed to leave the job he loathed. Now, he does his best to fill an education vacuum in his hometown after schools were bombarded and children had no chance to continue their education.

Government tanks have spared no school or mosque in Hantoutin. The small town has been shelled regularly since rebels captured it in July last year. Teachers have fled and students have so far missed a whole school year.

"My parents sent me to the mosque to take Quranic lessons. I miss my school, but I really enjoy it here," Ahmad, a 10-year-old student, said.

Ahmad's father said he wishes his son could also study math and science, but the risks are too great. He does not want to have his son outside the house for more than an hour each day.

"The recitation is good for keeping Ahmad's classical Arabic language in practice. This is not a good time to expand into other subjects," he said.

His Quran in hand, Ahmad usually runs to the mosque amid the sound of bombardment. He said he has become accustomed to the shelling, but Abu Mohammad has instructed the students to get to the lessons as fast as possible.

Ahmad took off his shoes as he entered the class, joining two dozens of students sitting in a circle on a rug. They soon began imitating Abu Mohammad's intonation of Quranic verses.

Abu Mohammad said the idea behind the classes was not only to teach children the Quran but also to help them cope with the violence that ravages Idlib province as rebels and government forces are battling for control of strategic territory.

"Some of those attending this lesson are the sons of martyrs. Several children have lost their fathers or mothers in the shelling. They need a lot of care and emotional support. I try to provide as much as I can," he said.

He said the guilt for remaining silent about the atrocities he witnessed while working for the intelligence has disturbed him for a long time. But since he started teaching, he is feeling better about himself.

"Seeing the joy of the children when they leave the mosque brings me peace of mind."