1.    In Islam marriage is a Sunnah of Prophet Muhammad Pbuh.

2.    Hypocrisy and force are unacceptable where there is a solemnity in the obeyance of the command of Allah, the Creator of the universe.

3.    The ‘peace and tranquillity Allah has bestowed upon the married couple cannot be achieved with force.

4.    Forced marriages are not only a vile criminal act in all societies but also against humanitarian ethics that Allah the Exalted has established for the humane society to follow.

5.    Muslims all over the world will do justice to Islam, Prophet Muhammad Pbuh and themselves by opposing forced marriages to the best of their ability. 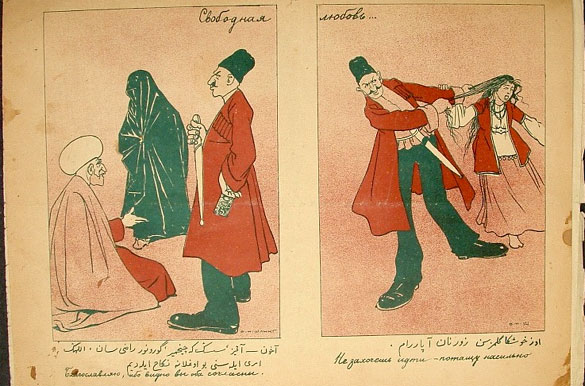 Forced marriage is the theme for the cartoon with the caption – Free love. The image should be read from right to left. The first picture in the right: Should you not want to go voluntarily, I will take you by force. In the next picture: The akhund – cleric says: "Lady, since you don't say anything, it seems that you agree. By the order of God I marry you to this gentleman".

In Islam, a marriage is a Sunnah of Prophet Muhammad Pbuh. Muslims print ‘النیکاح من سننتی’ (Al-Nikah u Min Sunnati) on the wedding cards. It means Nikah is one among Prophet's Sunnah. There is a reward for every Sunnah performed, therefore, there is a reward for Nikah also. Both the bride and the bridegroom are rewarded for performing the Sunnah of Nikah. No hypocrisy can be accepted in Nikah, Allah the Exalted says in the Holy Quran: “And We created you in pairs.” - (An-Naba - 8) They are clothing for you and you are clothing for them.  (Al-Baqarah: 187) Both these verses are a clear pointer to the fact that marriage is a solemn affair. Islam takes husbands and wives as the ones who guard each other’s honour against the world. They are made for each other. They are enjoined to be husband and wife by Allah, the Almighty in heaven.

It is a common humane sense that any kind of hypocrisy and force is unacceptable where there is a solemnity in the obeyance of the command of Allah, the Creator of the universe.

There is no relationship as beautiful as that of a husband and a wife. Although every bit of happening in the universe is decided in heavens but for marriages, it is specifically said that ' marriages are decided in heaven. The status of marriage in the eyes of Allah is clear from the verse, ‘He created for you mates from among yourselves, that ye may dwell in tranquillity with them, and He has put love and mercy between your (hearts) . . . " (Ar-Rum: 21). Allah has made marriage a source of tranquillity and peace between a husband and a wife. The ‘peace and tranquillity Allah has bestowed upon the married couple cannot be achieved with force. The pious institution of marriage bears the responsibility of creating a pious society that carries love, affection and care for all.

Marriage is a divine institution and it is encouraged by Islam. No force, therefore, can be allowed by any means or excuse. According to Islam, a husband is a protector of his wife. A husband is responsible for his wife’s physical and emotional wellbeing. Someone who has forced his wife into marriage cannot fulfil the responsibilities of a husband, therefore, there is no place for forced marriage in Islam.

Marriages are not confined to the relationship of two persons but it concerns two families and in extension to the concerned society. In the Islamic essence, marriages are a social bond of two people living together and forming a family unit. For the success of this social agreement, it is necessary for both parties to be willing and thus trusting each other. Islamic ethic allows both the parties (the boy and the girl) to meet and talk to each other, in presence of an elder of whichever side, he or she may. Islam understands the need for two people to agree to live together before they are bound in an agreement.

Allah has granted more power to a girl before the Nikah is performed and equal status after the marriage. More power before the Nikah as the Nikah Khwan (the performer of Nikah) goes to the girl with two witnesses each from both sides and after reading out the full detail of the boy (father’s name, address, the Mehr amount, the names and addresses of the witnesses) asks her whether she is allowing him to perform Nikah, on her free will, with the boy or not. Nikah Khwan and the witnesses must listen to her ‘yes’, so she is asked to speak loudly. ٰIt is mandatory.

Now in such a situation where does, Islam leaves the space that pseudo-Muslims and Maulvis exploit and perform a 'forced Nikah’. And if anybody does so it is Un-Islamic and against the spirit of the teachings of Allah and His messenger Prophet Muhammad Pbuh. The Holy Quran and the Prophetic traditions have time and again given happy tidings of divine rewards here and hereafter for the couple who grow a happy ethical family having all the humane essence and divine traits.

Prophetic Traditions against the Forced Marriage

Narrated Abdullah ibn Abbas: "A virgin came to the Prophet (pbuh) and mentioned that her father had married her against her will, so the Prophet (pbuh) allowed her to exercise her choice. (Translation of Sunan Abu-Dawud, Marriage (Kitab Al-Nikah), Book 11, Number 2091)"

He said, “Then this marriage is invalid, go and marry whomever you wish.” I said “I have accepted what my father has arranged, but I wanted women to know that fathers have no right in their daughter’s matters (i.e. they have no right to force a marriage on them). (Fathul Bari Sharah Al Bukhari 9/194, Ibn Majah Kitab un Nikah 1/602)

"Fear Allah regarding women. Verily you have married them with the trust of Allah and made their bodies lawful with the word of Allah. - Prophet Muhammad Pbuh's Khutbah from the Mount of Mercy at Arafat on the occasion of Hajj al-Wada (Farewell Pilgrimage)

Above mentioned traditions explicitly denounce any kind of force in marriage and married life. The forced marriages are against the spirit of Islam, the teachings of Prophet Muhammad Pbuh and humanity that include the followers of all the religions and faith.

A family is a foundation of a society. If the foundation is forced to hold together the building, it is bound to fall sooner than later. The Maulvis, the Pandits or the Fathers whoever do this divine and blessed act with any nefarious design in mind is abusing the Sunnah and eventually breaking the foundation of the society. It is a divine and an ethical crime against the spirit divine command and humane values. For this crime, divinity has harsh punishment. This crime must also be tried in society with the harshest possible punishment by the courts of law.  The people who are in the knowledge of the Holy Quran, Sunnah and Shari’ah for Muslims and other religious scriptures for non-Muslim must take the responsibility of spreading the message of the importance of keeping the holy spirit of wedding intact and give the girls the power of choice as per the guidelines of the concerned religious beliefs.

Muslims all over the world will do justice to Islam, Prophet Muhammad Pbuh and themselves by opposing forced marriages to the best of their ability. Forced marriages will destroy the Islamic essence of social ethics and will be a reason for the destruction of Islamic ideology.

Quranic Ayat Referring to the Position of Women as a Wife

The believing men and believing women are allies of one another. (At-Taubah: 71) - Sahih International

O you who have believed, it is not lawful for you to inherit women by compulsion. (An-Nisa: 19) - Sahih International

…and of his signs is that He created for you wives from among yourselves, that you might reside with them, and has put kindness and mercy between you. Surely, there are signs in this for those who think. - (Ar-Rum -21)

Consider the following from the Bible:

And the two shall become one flesh – Matthew 19:5

And the following from the bestselling Christian author Max Lucado:

“God created marriage. No government subcommittee envisioned it. No social organization developed it. Marriage was conceived and born in the mind of God.”  ~ Max Lucado

When Allah the Exalted says in the Holy Quran, ‘There is no compulsion in religion. The Right Way stands clearly distinguished from the wrong - (Al-Baqara 256), there is no place for any hypothetical discussion about marriage by compulsion. This ends discussions and explanations on forced marriages.

A forced marriage awareness and prevention initiative has been launched at Sydney Airport, Australia’s busiest airport, with the roll-out of ‘Project Skywarp’.

Forced marriages are not only a vile criminal act in all societies but also against humanitarian ethics that Allah the Exalted has established for the humane society to follow. Quran and Hadith exegesis and scholars of all the Islamic schools should declare forced marriages ‘Haram’, to ensure it does not happen ever anywhere in the world.