Islam Is A Set Of Democratic Human Values Like Freedom Of Speech And Freedom Of Dissent, Though Most Muslim Countries Do Not Allow It. During The Long Centuries Of The Rule Of Despotic Caliphs In The Muslim World, Even The Slightest Expression Of Dissent And Even By The Tallest Of Scholars Would Invite Severe Punishment.

1.    The Holy Quran and the Prophetic traditions advocate Freedom of Speech.

3.    Freedom of Speech provides human being with a feeling of being a part of society. 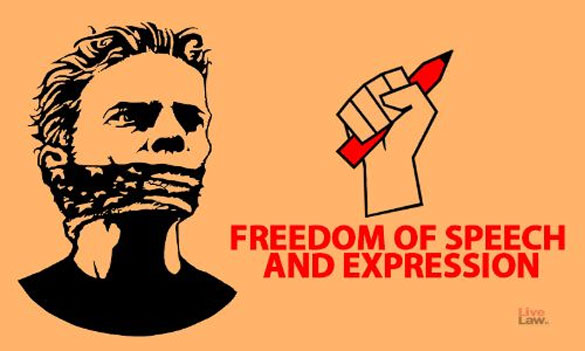 Freedom of expression does not let discontent boil and burst into a revolution. Discontent brews in the family or society only when people are not allowed to speak and the powers that matter are not ready to listen.

The Concept of Shura

The concept of Shura is the concept of freedom of speech. Shura is needed to engage with members from as different strata of the society as possible. Shura members should belong to almost all the classes, genders and regions as possible for it will provide an opportunity to the rulers to listen to the problems of a varied section of society. It will create an atmosphere of togetherness and unity in diversity.

Parliament in a parliamentary democracy and Shura in an Islamic state are the platforms of discussion. Members of the Shura (parliament) are derived from different sections of society to introduce to other members with particular problems of the section they belong to. Genuinely discussed problems are resolved in a matter of time to the best satisfaction of the faction concerned, breaking the chain of discontent, if any, in the society. Thus the concept of Shura is the concept of freedom of expression where core issues of the society are debated.

The Holy Quran, the Prophetic Traditions and the Freedom of Speech

The best example of freedom of speech in any religion is the freedom Allah Almighty bestowed upon Iblees and let him put his grievances in front of Him. Iblees then asked for some preferences for himself and Allah, the Most Gracious granted him his request. Consider following Ayat of the Holy Quran:

[Allah] said, "O Iblees, what prevented you from prostrating to that which I created with My hands? Were you arrogant [then], or were you [already] among the haughty?"  38:75) - Sahih International

If Allah, the Almighty allows Satan (the Iblees) to express his dissent, how can anyone even think of us the ‘Ashraf ul Makhluqat’ not being allowed to express our grievances in front of each other?

Islam is a set of democratic human values like freedom of speech and freedom of dissent. Though most Muslim countries do not allow it.  During the long centuries of the rule of despotic caliphs in the Muslim world, even the slightest expression of dissent and even by the tallest of scholars would invite severe punishment.

Islam is a way of life that guides people to take the path of righteousness and create an atmosphere of peace and harmony between the people through discussions that provide means of an amicably oriented peaceful environment of a liveable society. Allah, the All-knower says in the Holy Quran:

According to the Holy Quran freedom of speech is one of the basic human rights. Quran commands its followers to be just and soft-spoken to other human beings. The manner of ‘soft speaking and ‘just’ points towards a human being’s right to life. Quranic Ayat's command to the believers of Islam suggests to talk to express each other’s feelings and thoughts and keep truth and lesson of perseverance in front of each other, as in the following verse:

Consider the following Hadees Cited by Ibn Nuhaas and narrated by Ibn Habbaan:

The best Jihad is the word of Justice in front of the oppressive Sultan.

The concept of ‘Amr bi al-Maroof wa'l-Nahy an al-Munkar’ meaning, ‘Enjoining what is right and forbidding what is wrong’ that finds specific space in the Holy Quran is a perfect example of humankind being asked to use freedom of speech to invite all the people to the good deeds of the society and speak against the evils that have crept into a human being. This command is an invitation to use freedom of speech. The Holy Quran says:

"Let there arise out of you a band of people inviting to all that is good, enjoining what is right, and forbidding what is wrong: They are the ones to attain felicity." (Quran 3:104) - Abdullah Yusuf Ali

Remember, do not let fear of man prevented with the right person to say if he knew. " (Narrated by Ibn Majah, Hadith No 2191).

The Holy Quran and Ahadees are the best propagators of freedom of speech. The human being is expected to go for this one of the best jihads and keep his views and thoughts in front of others in the best possible ways and means.

Throttling of Freedom of Speech

Freedom of speech is taken as an abuse only by the authoritarian regimes that do not listen to the voices of dissent for the fear of losing their power. Many such countries do not allow freedom of speech in the name of disturbance of peace and prosperity of the country concerned but this is not just. The country that does not listen to its people can not keep them in peace and in good humour that generates good workers, scientists and other professionals without whose services development of a country are not possible or if it seems to be growing by throttling the freedom of speech, it should understand that it would have developed hundred times more had it listened to dissents of its people and resolved their issues.

If any Muslim majority country is not allowing its people to speak, it is going against the teachings of Islam. And they should acknowledge the fact that going against the Quranic and Prophetic teachings is going against the basic tenets of Islam. Islamic countries like Saudi Arabia, Pakistan, Iran and Turkey are notoriously known for suppressing every kind of voice of dissent. These countries will do better for themselves, in particular, and the world in general if they follow the examples set by the Holy Quran and the Prophetic traditions. Freedom of speech is an important part of human rights, if, therefore people are not being allowed to speak they are being denied their basic human rights. And Islam is the greatest advocate of human rights, these countries must know.